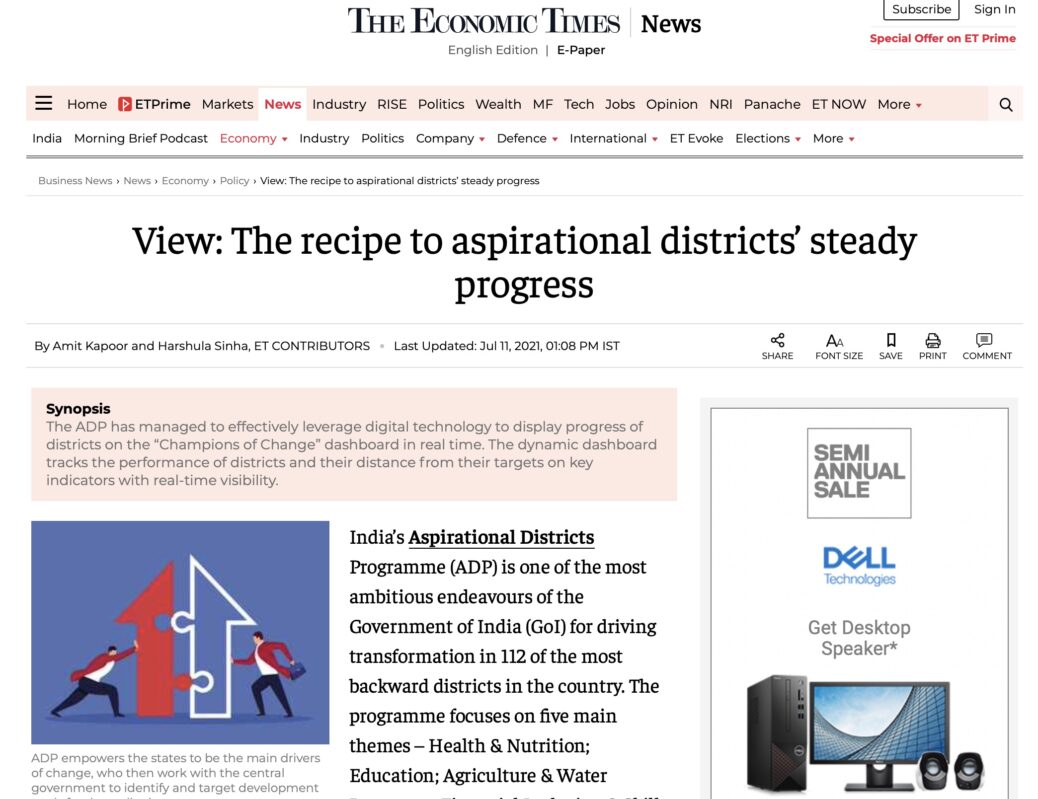 India’s Aspirational Districts Programme (ADP) is one of the most ambitious endeavours of the Government of India (GoI) for driving transformation in 112 of the most backward districts in the country. The programme focuses on five main themes – Health & Nutrition; Education; Agriculture & Water Resources; Financial Inclusion & Skill Development; and Basic Infrastructure. Since the launch of ADP in 2018, the aspirational districts have made immense progress. Recently, a UNDP appraisal report titled Aspirational Districts Programme: An Appraisal recognized that the programme resulted in sectoral growth and improvements in governance and administration and commends it for applying “innovative techniques”. The question is, “What are these innovative techniques that sets ADP apart from other similar developmental initiative?”

In adherence to the spirit of cooperative and competitive federalism, the ADP adopts a multi-pronged approach, called the 3C approach, which forms the core principles of the program. The 3Cs are interconnected and stand for the following: –

India’s quasi-federal structure has often drawn scrutiny over the imbalance of power that favours the Centre, but the spatial disparities across states also call for greater support to the less developed states. The ADP takes the middle path of converging the efforts of states and the Centre, with state governments being the main drivers of change, which eliminates the issue of overlapping efforts as well as allows the historically backward states to take a more proactive role in development.

The programme also encourages collaborations with international development organisations and civil society. Unlike traditional partner engagement approaches, the ADP integrates the external development partners within the state institutions. The partners, therefore, work within rather than outside the institutional apparatus of the government. They are involved in improving the quality of governance at the grassroots, augmenting the capacity of the district administration to deliver citizen services as well as ensuring performance management and accountability through their data validation efforts. Thus, the seamless collaboration incorporated in ADP’s structure subverts the tradition of working in silos

The ADP has managed to effectively leverage digital technology to display progress of districts on the “Champions of Change” dashboard in real time. The dynamic dashboard tracks the performance of districts and their distance from their targets on key indicators with real-time visibility. The dashboard also presents the annual scores for the best performing district within a particular state for each indicator. All these functions of the dashboard work to strengthen competition. Moreover, the availability of dashboard in the public domain improves transparency and accountability, which encourages citizen participation in the governance process.

Thus, the ADP breaks away from the status quo in a number of ways. The institutional structure and innovative practices deployed by the programme recognise the issues of conventional approaches and forges a new path that is cognizant of ground realities. The programme encapsulates a strong set of innovative practices that can evolve based on the learnings along the way, as well as inspire similar approaches in other developmental schemes.

The article was published with Economic Times on July 11, 2021.