Addressing India’s mental health: We need to begin with adolescents 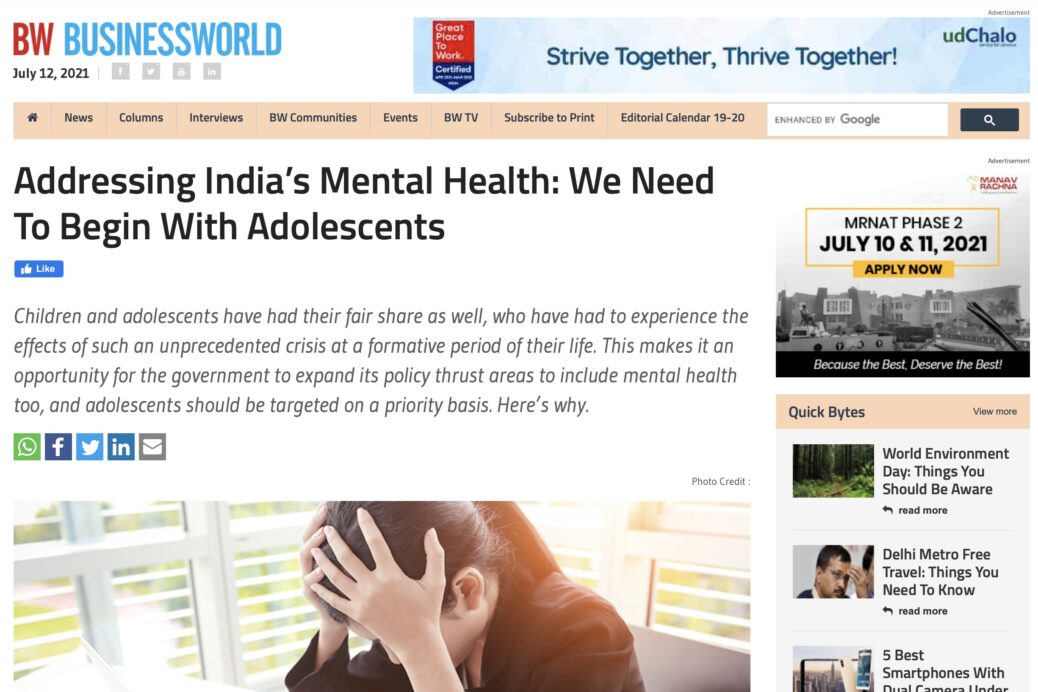 Addressing India’s mental health: We need to begin with adolescents

The Covid-19 pandemic has been devastating on all fronts. Naturally, people around the world could not escape its psychological impact either. The disruption of daily life, extended periods of quarantine, income losses and the loss of lives took a toll on every individual. Children and adolescents have had their fair share as well, who have had to experience the effects of such an unprecedented crisis at a formative period of their life. This makes it an opportunity for the government to expand its policy thrust areas to include mental health too, and adolescents should be targeted on a priority basis. Here’s why.

India’s mental health crisis precedes the onset of the pandemic. A 2017 Lancet study titled “The burden of mental disorders across the states of India: the Global Burden of Disease Study 1990–2017” found that every seventh Indian was affected by mental disorders. This itself should sound the alarm for governments and policymakers. To add to this is the finding of studies over the years that adult mental disorders usually begin in childhood or adolescence and nearly half of all mental disorders during one’s lifetime begin during mid-teenage years. Since adolescence is the period of onset of about half the cases of mental illness, it is judicious to address it at the source, when it is still in its early stages.

Secondly, besides its intrinsic value, mental wellbeing is also instrumental for better economic growth of a country. Mental health issues are one of the major factors behind productivity losses, and during a time when the Indian economy has received major setbacks due to the pandemic, we cannot afford to move down the productivity curve. Adolescents, defined by the United Nations Population Fund (UNFPA) as the population group aged 10-19 years old, will be becoming an integral part of the workforce in the near future. Hence, their mental wellbeing is crucial for the country’s growth trajectory too.

The question that follows is, where does India stand in addressing its adolescents’ mental health?  India hit a major milestone by legislating the Mental Healthcare Act (MHCA) 2017, which mandates the central and state governments to integrate mental health facilities at each level of public health system, and also recognizes mental healthcare as a justiciable right. For adolescent in particular, the Rashtriya Kishor Swasthya Karyakram (RKSK) 2014 has components addressing mental health.

However, there are impediments to effective implementation of such policy reforms. The stigma surrounding mental health admittedly prevents individuals from seeking care, and contributes to India’s high treatment gap. Nevertheless, it can be corrected with greater policy push. In the current state of public expenditure, the budget for mental healthcare is insufficient to realise the policy goals.  According to a study conducted by the Institute for Competitiveness, India requires public expenditure of at least Rs 2,745 crores per year on adolescent mental health to meet the target of MHCA 2017 to achieve the internationally accepted standards for the number of mental healthcare professionals per lakh of population, within 10 years of commencement of the Act. While this is the calculation for only addressing the adolescent mental healthcare needs, the reality of public expenditure on mental healthcare in general is abysmally low. For example, National Mental Health Programme was allocated only Rs 50 crore in FY18 and Rs 40 crore in the successive financial years.

This is a crucial time for addressing the ongoing mental health crisis of India for improving the health of both citizens and the economy. With the evidence we have, it is judicious to begin corrective action with adolescents in focus.

The article was published with Business World on July 12, 2021.