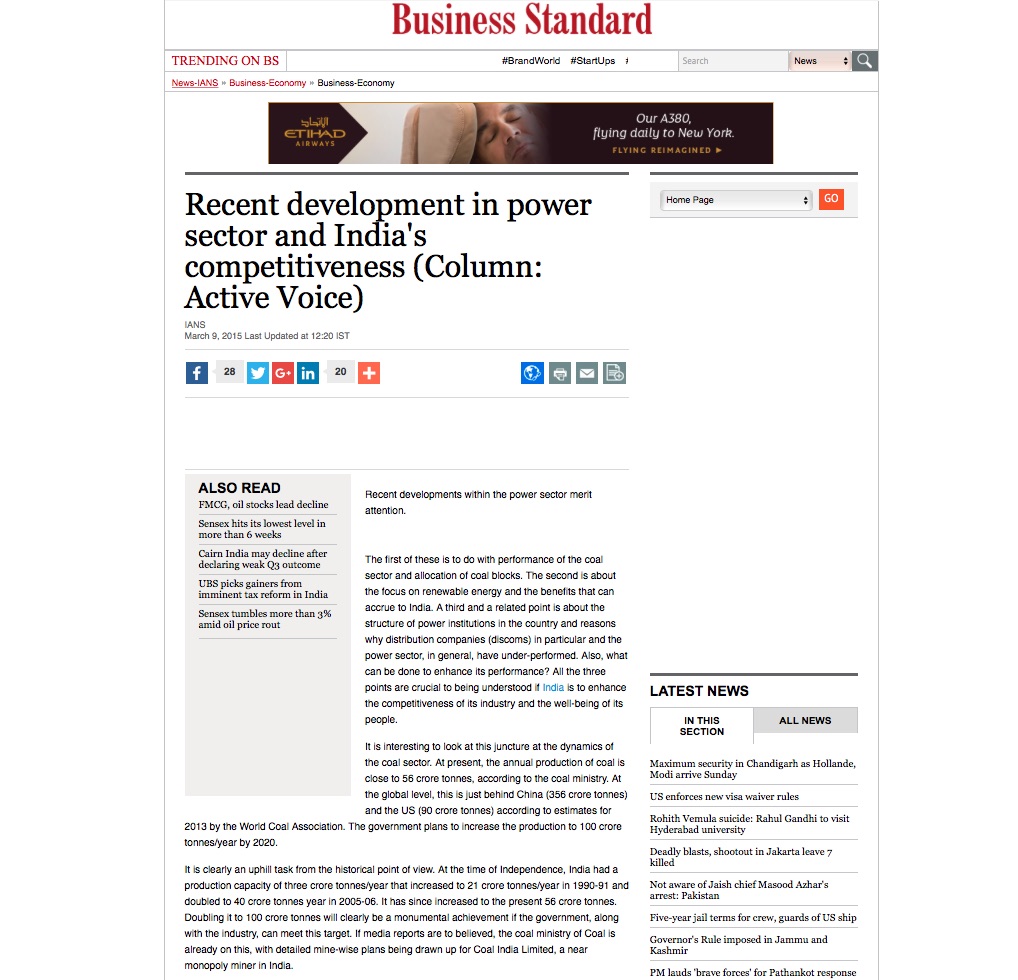 The first of these is to do with performance of the coal sector and allocation of coal blocks. The second is about the focus on renewable energy and the benefits that can accrue to India. A third and a related point is about the structure of power institutions in the country and reasons why distribution companies (discoms) in particular and the power sector, in general, have under-performed. Also, what can be done to enhance its performance? All the three points are crucial to being understood if India is to enhance the competitiveness of its industry and the well-being of its people.

It is clearly an uphill task from the historical point of view. At the time of Independence, India had a production capacity of three crore tonnes/year that increased to 21 crore tonnes/year in 1990-91 and doubled to 40 crore tonnes year in 2005-06. It has since increased to the present 56 crore tonnes. Doubling it to 100 crore tonnes will clearly be a monumental achievement if the government, along with the industry, can meet this target. If media reports are to believed, the coal ministry of Coal is already on this, with detailed mine-wise plans being drawn up for Coal India Limited, a near monopoly miner in India.

A setback to the sector came in the form of cancellation of licenses to 204 coal blocks by the apex court last September. The ministry is solving this by conducting e-auctioning of blocks. The first round had 18 mines with combined extractable reserves of nine crore tonnes going on auction. Post that, a second round that started on March 4 was also quite successful with some 15 mines going on auction. These together have been able to rope in more than Rs.1.57 lakh crore of benefits over the next 30 years for the various mineral-rich states where the mines are located. The process seems fair and transparent and seems to bring India closer the target set for coal production over the next five years in addition to revenue benefits to states.

Another major development recently was in the renewable energy space when the NITI Aayog came up with its first report titled “India’s Renewable Electricity Roadmap 2030 – Toward Accelerated Renewable Electricity Deployment”. The report made some interesting points about the need to realign the power policy with what the renewable energy sector is witnessing at present and come up with a new renewable policy and law.

The report and its findings find much more relevance in the present ambitious scenario set by the new government. For both wind and solar energy, targets have been increased from 20 GW of solar power (by 2022) to 100 GW (by 2019) and from an additional 15 GW of wind power (during 2012-17) to an additional 40 GW (by 2019). Both these found mention in Finance Minister Arun Jaitley’s budget speech. Other recommendations included: support mechanisms for compliance and timely implementation of renewable energy; and RE grid integration and more efficient grid operation.

These recommendations are apt considering that in spite of various reforms, renewable energy in India’s energy mix is still lesser than 15 percent of the total production.

Another issue in the power sector is the structure of power institutions and low realizations, particularly by the discoms. The combined losses to the sector, according to a recent World Bank report are close to Rs.350 billion ($5.5 billion). To put that number in perspective, it’s five percent of India’s GDP!

Several possible reasons are given for the underperformance of the sector prominent among which are: political interference and structure of institutions particularly lack of unbundling. Also, lack of corporate governance, power theft, and inability of distribution companies to collect revenues are cited as the reasons for losses.

Keeping in mind the above-mentioned developments, we feel the sector, as a whole at present, needs reforms in structure and accountability from state institutions, which the central ministry seems keen on. These recent developments seem to be beneficial to India’s long-term growth and competitiveness especially the good news on coal auctions. More such happenings in the economy will help India revive growth and get back on track to fulfill the promise that the present government had made to the people before assuming power – 24X7 power for all.

Published with Business Standard on March 9, 2015.