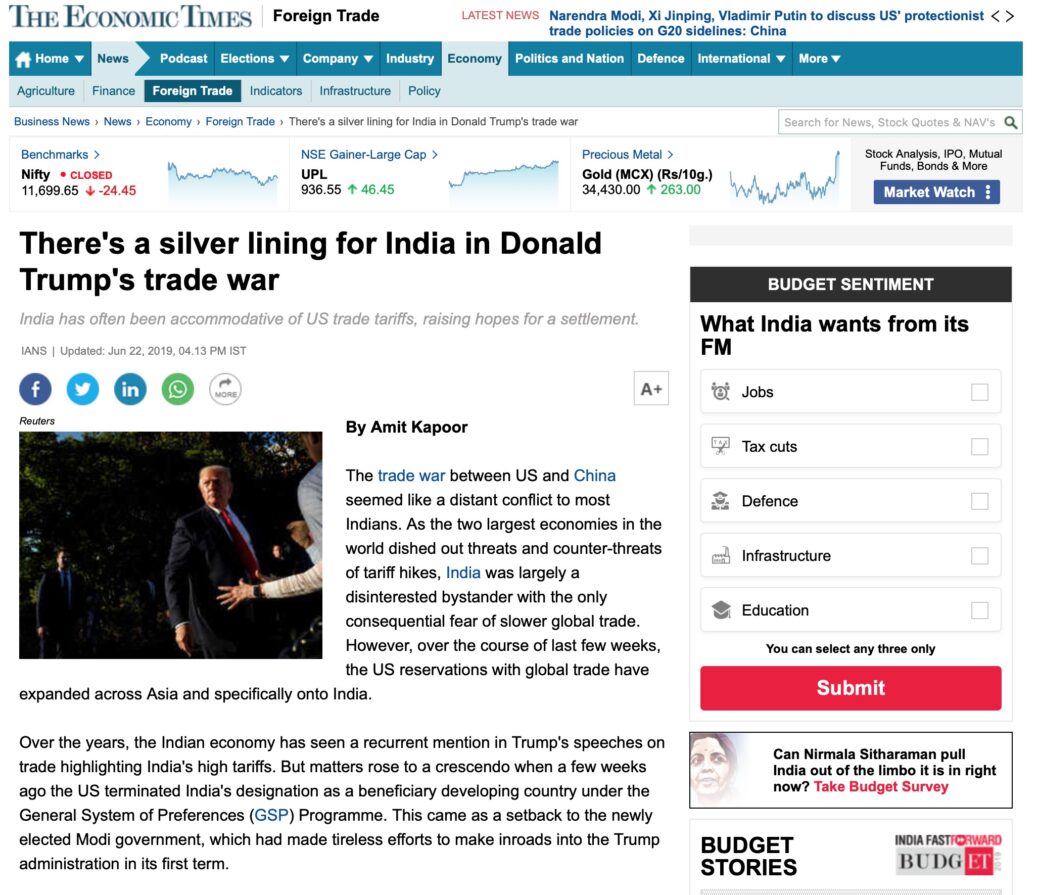 The trade war between US and China seemed like a distant conflict to most Indians. As the two largest economies in the world dished out threats and counter-threats of tariff hikes, India was largely a disinterested bystander with the only consequential fear of slower global trade. However, over the course of last few weeks, the US reservations with global trade have expanded across the Asian continent and specifically onto India.

Over the years, the Indian economy has seen a recurrent mention in Trump’s speeches on trade highlighting India’s high tariffs. But matters rose to a crescendo when a few weeks ago the US terminated India’s designation as a beneficiary developing country under the General System of Preferences (GSP) Programme. This came as a setback to the newly elected Modi government, which had made tireless efforts to make inroads into the Trump administration in its first term.

The GSP Programme, established by the Trade Act of 1974, is one of the oldest and largest trade preferential tariff system of the US, which provides a duty-free treatment for over 3500 products from a wide range of designated beneficiary countries inclusive of least-developed nations. It aims at enabling these countries to climb out of poverty and boost their economic growth. GSP promotes sustainable economic development by eliminating duties on thousands of products when imported from one of 120 designated beneficiary countries and territories result in an increased and diversified trade with the US.

As per the Congressional Research Service report, in the year 2018, the program exempted Indian goods worth more than $6 billion from import duties. As a result, India exported goods worth around $54 billion to the United States in the same year and bought $33 billion worth of American goods. There might have been significant benefits from the programme in the past but India’s reliance on it has been reducing substantially over the years.

The US decision to withdraw the GSP has come after the country’s repeated demands for greater market access for a range of products, which India has been postponing. However, it is interesting to note that the US trade deficit with India has been following a downward trend since 2016. With each passing year the deficits are falling (USD 21.3 billion 2018 from USD 22.9 billion in 2017 and USD 24.4 billion in 2016). This couldn’t have been possible if India wasn’t providing reasonable market access to its largest trading partner.

In the past, India has often been accommodative of US trade tariffs and embargos, raising the hopes for a negotiated settlement. In contrast, this time India has decided to retaliate by imposing duties on about 29 goods of US origin worth $200 million. But it is in the interest of both economies that the situation does not escalate into a series of retaliatory bouts.

The Trump administration, which is bent upon fixing its trade equation with China needs allies in the developing world. In the on-going trade war with China, India can prove to be a useful ally. It is extremely short-sighted to alienate India; especially when India’s trade surplus with the US is merely $23 billion against China’s $323 billion.

Meanwhile, the stakes for the Indian economy are also too high to get involved into an unnecessary trade war. A large number of export items to the US from India, including gems, jewellery and textiles, are labour-intensive products. An economy which is actively looking to push employment levels upwards cannot afford to lose out on this front.

Moreover, in the first five years of the Modi government, India received record levels of foreign investment, which are beginning to taper off. The growth rate for the economy has also slumped to a five-year low. So, the first task on the new foreign minister, Jaishankar’s list would be to iron out these issues through bilateral trade discussions without compromising India’s national interests.

The US Secretary of State, Mike Pompeo’s visit to India this month will be a useful opportunity to resolve these differences through negotiations. It would be a win-win for both countries to make amends. While US firms looking to relocate out of China due to rising manufacturing costs there would benefit from less strained trade relations with India. More FDI by such large firms is the need of the hour for India as an influx by such big companies has shown a boost in the economic activity by stimulating employment and improving the establishment of intermediate firms — especially in the small and medium sector — leading to an expansion in exports over time. Only time will tell how this diplomatic situation shapes up.

The article was published with Economic Times, The Hans India, Outlook Indiaand The Senitalon June 23, 2019.