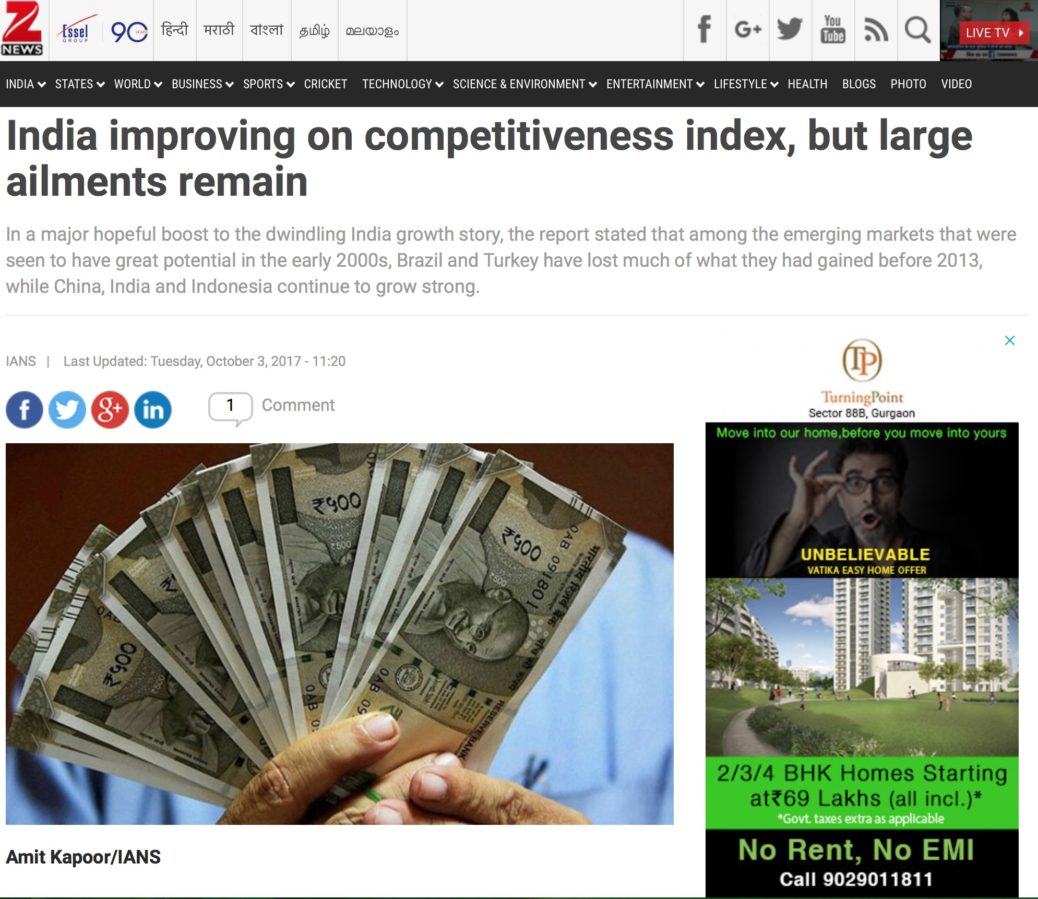 In a respite to the Modi government, which has been facing the heat over dismal economic numbers, the World Economic Forum (WEF) study on global competitiveness for 2017 commended the improving quality of institutions in India, especially in terms of improved efficiency of public spending in the last few years. This was despite the fact that India slipped a place to rank 40 out of a total 137 countries in the Global Competitiveness Index 2017-18.

However, the WEF has clarified that it has changed its methodology this year and the rankings are not comparable with those of last year. Moreover, it also pointed out that this is India’s highest score ever with the new methodology (4.6 compared to 4.5 in the previous year). The country’s score has improved across most indicators of competitiveness, especially infrastructure (66th, an improvement of two points over last year), higher education and training (75th, up six) and technological readiness (107, up two), which is a reflection of recent public investment in these areas.

India has also ranked the highest among all South Asian countries with the next highest being Bhutan and Sri Lanka ranked at 85. Among the BRICS nations, China (27) and Russia (38) rank above India while South Africa and Brazil are placed at 61 and 80. In a major hopeful boost to the dwindling India growth story, the report stated that among the emerging markets that were seen to have great potential in the early 2000s, Brazil and Turkey have lost much of what they had gained before 2013, while China, India and Indonesia continue to grow strong.

The report also gives some useful insights about the growth trends of the Indian economy. First, among the emerging economies, it finds that India and China are gradually developing into major centres of innovation. In a recent study of geographical clusters generating the most patents, three Indian cities appeared in the top 100 with Bengaluru at 43 (with patent activity focused on computer technology), Mumbai at 95 and Pune at 96 (with both registering among the most patents in organic chemistry). Due to such an improvement in the innovative environment within India, the WEF rankings place India at 29 on the innovation pillar for competitiveness.

Since innovation is a major determinant of the long-term growth trends of an economy, these figures bode well for India’s future prospects. However, the improvement comes with a caveat. It has been seen that emerging economies that are doing well in innovation are leaving large sections of the population behind since they are not technologically equipped.

The second insight from the Global Competitiveness Index is the performance of the health and primary education pillar, in which India ranks at 91 — second-worst only to technological readiness. It cannot be overstated how poor health and education outcomes can affect the competitiveness of a country and its citizens. India has always had a history of poor public investment in health and primary education and it pays a hefty cost for this in terms of its competitiveness. Such a continued trend in the long run will result in an unequal and mostly unproductive society where only the well-off, who manage to provide nutrition and education for their children, will thrive.

Thirdly, the WEF Executive Opinion Survey reveals that the private sector still considers corruption to be the most problematic factor for doing business in India. This finding puts a question mark over the effectiveness of the government’s attack on corruption over the last few years. Lack of access to financing and tax regulations also remain the prime problems for setting up a business in India. The former might gradually subside when the problems of non-performing assets (NPAs) with banks is remedied, while the latter might change once the economy adjusts to the newly-implemented Goods and Services Tax (GST). However, corruption will continue to remain an impediment to the country’s competitiveness and its long-term growth.

Therefore, India might be improving on the competitiveness index owing to high public investment in some crucial sectors, but large ailments within the economy still remain. Problems of corruption and a gross negligence of health and education sectors have always defined India’s competitiveness. A recent growth in innovative tendencies seemed to be a saving grace but as it turns out, there seem to be distributive issues. How India handles these concerns will determine its future.

The article was published with Yahoo News and Zee News on October 3, 2017.