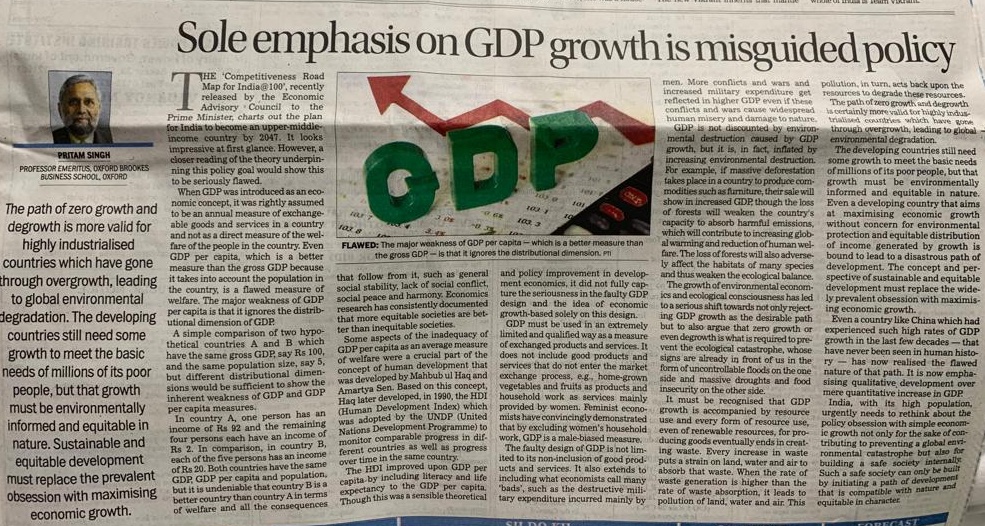 The path of zero growth and degrowth is more valid for highly industrialised countries which have gone through overgrowth, leading to global environmental degradation. The developing countries still need some growth to meet the basic needs of millions of its poor people, but that growth must be environmentally informed and equitable in nature. Sustainable and equitable development must replace the prevalent obsession with maximising economic growth.

The ‘Competitiveness Road Map for India@100’, recently released by the Economic Advisory Council to the Prime Minister, charts out the plan for India to become an upper-middle-income country by 2047. It looks impressive at first glance. However, a closer reading of the theory underpinning this policy goal would show this to be seriously flawed.

When GDP was introduced as an economic concept, it was rightly assumed to be an annual measure of exchangeable goods and services in a country and not as a direct measure of the welfare of the people in the country. Even GDP per capita, which is a better measure than the gross GDP because it takes into account the population in the country, is a flawed measure of welfare. The major weakness of GDP per capita is that it ignores the distributional dimension of GDP.

A simple comparison of two hypothetical countries A and B which have the same gross GDP, say Rs 100, and the same population size, say 5, but different distributional dimensions would be sufficient to show the inherent weakness of GDP and GDP per capita measures.

In country A, one person has an income of Rs 92 and the remaining four persons each have an income of Rs 2. In comparison, in country B, each of the five persons has an income of Rs 20. Both countries have the same GDP, GDP per capita and population, but it is undeniable that country B is a better country than country A in terms of welfare and all the consequences that follow from it, such as general social stability, lack of social conflict, social peace and harmony. Economics research has consistently documented that more equitable societies are better than inequitable societies.

Some aspects of the inadequacy of GDP per capita as an average measure of welfare were a crucial part of the concept of human development that was developed by Mahbub ul Haq and Amartya Sen. Based on this concept, Haq later developed, in 1990, the HDI (Human Development Index) which was adopted by the UNDP (United Nations Development Programme) to monitor comparable progress in different countries as well as progress over time in the same country.

The HDI improved upon GDP per capita by including literacy and life expectancy to the GDP per capita. Though this was a sensible theoretical and policy improvement in development economics, it did not fully capture the seriousness in the faulty GDP design and the idea of economic growth-based solely on this design.

The faulty design of GDP is not limited to its non-inclusion of good products and services. It also extends to including what economists call many ‘bads’, such as the destructive military expenditure incurred mainly by men. More conflicts and wars and increased military expenditure get reflected in higher GDP even if these conflicts and wars cause widespread human misery and damage to nature.

GDP is not discounted by environmental destruction caused by GDP growth, but it is, in fact, inflated by increasing environmental destruction. For example, if massive deforestation takes place in a country to produce commodities such as furniture, their sale will show in increased GDP, though the loss of forests will weaken the country’s capacity to absorb harmful emissions, which will contribute to increasing global warming and reduction of human welfare. The loss of forests will also adversely affect the habitats of many species and thus weaken the ecological balance.

The growth of environmental economics and ecological consciousness has led to a serious shift towards not only rejecting GDP growth as the desirable path but to also argue that zero growth or even degrowth is what is required to prevent the ecological catastrophe, whose signs are already in front of us in the form of uncontrollable floods on the one side and massive droughts and food insecurity on the other side.

It must be recognised that GDP growth is accompanied by resource use and every form of resource use, even of renewable resources, for producing goods eventually ends in creating waste. Every increase in waste puts a strain on land, water and air to absorb that waste. When the rate of waste generation is higher than the rate of waste absorption, it leads to pollution of land, water and air. This pollution, in turn, acts back upon the resources to degrade these resources.

The path of zero growth and degrowth is certainly more valid for highly industrialised countries which have gone through overgrowth, leading to global environmental degradation.

The developing countries still need some growth to meet the basic needs of millions of its poor people, but that growth must be environmentally informed and equitable in nature. Even a developing country that aims at maximising economic growth without concern for environmental protection and equitable distribution of income generated by growth is bound to lead to a disastrous path of development. The concept and perspective of sustainable and equitable development must replace the widely prevalent obsession with maximising economic growth.

Even a country like China which had experienced such high rates of GDP growth in the last few decades — that have never been seen in human history — has now realised the flawed nature of that path. It is now emphasising qualitative development over mere quantitative increase in GDP.

India, with its high population, urgently needs to rethink about the policy obsession with simple economic growth not only for the sake of contributing to preventing a global environmental catastrophe but also for building a safe society internally. Such a safe society can only be built by initiating a path of development that is compatible with nature and equitable in character.

The above editorial was published with The Tribune Chandigarh Edition by Pritam Singh, Professor Emeritus, Oxford Brookes Business School, Oxford