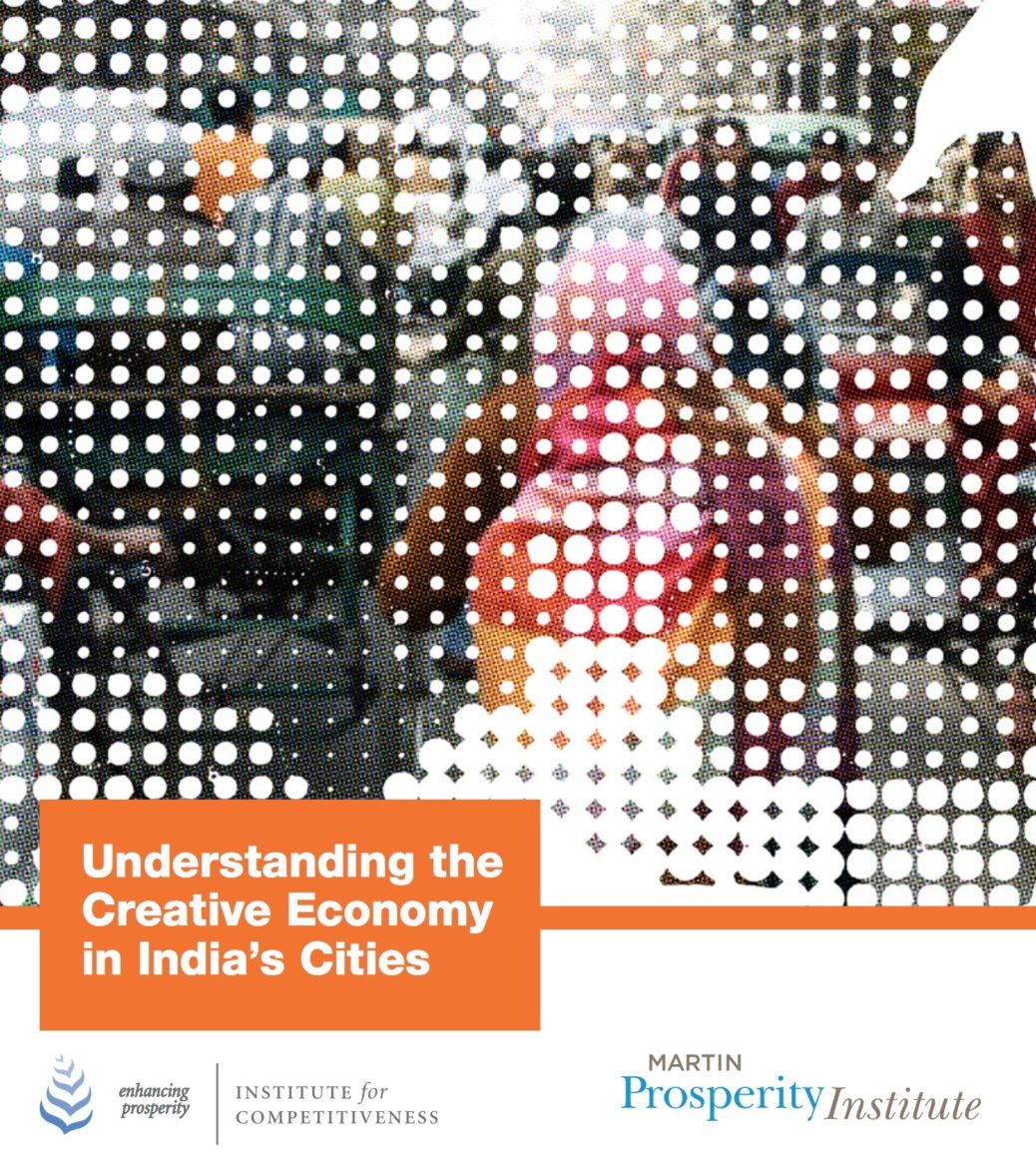 New Delhi, 3 May 2013 – According to the Creative Index Report 2013, the first in the series, launched by the Martin Prosperity Institute (MPI), Institute for Competitiveness (IFC) & The Prosperity Institute of India (TPII), Delhi takes the top spot as the most creative state in India with the greatest potential for success in today’s creative economy. Chandigarh, Punjab, Kerala, Goa, Mizoram, Andaman & Nicobar Islands, Puducherry, and Maharashtra round out the top 9.  Haryana and Manipur are tied for the 10th position.

“Each of the 3Ts is important to economic development and in establishing a robust Creative Economy, no one T on its own can provide sufficient support to sustain growth and continued prosperity. Taken together, these 3Ts of economic development combine to produce the Creativity Index, a measure of a regions overall Creative Economy”, suggests Kevin Stolarick (PhD), Research Director, Martin Prosperity Institute and the lead author of this report. “India should recognize the importance of building Talent, courting Technology and promoting Tolerance in gaining an economic advantage. Such an approach for India would mean recognizing the creative talent of its residents in order to develop the businesses and industries of tomorrow; investing in the infrastructure required to mobilize more innovation and economic growth; and recognizing the importance of openness and diversity in gaining economic advantage”.

Tolerance, the first “T” of economic development is a quality recognized as essential to objective thinking since the 19th century. In the Indian context, the Mosaic index has been used to measure the level of tolerance in a region. The Mosaic Index is calculated by the concentration of Scheduled Tribes or Castes, percent of population that is foreign born, rural and urban literacy divide, and finally, a Religious Herfindahl Index, which measures religious diversity within a specific State or Union Territory.

In the overall Tolerance Index, the results show that regions in the Far North, Far East, and South West stand out among India’s 28 States and 7 Union Territories. More generally, the regions located on or near geo-political borders, major metropolitan areas, and those positioned along the West coast tend to score better on the Tolerance Index than those in central regions and along the east coast, which score poorly.

Talent is the second “T” of economic development. Talented individuals are responsible for generating the innovative ideas that result in newly developed technologies that can stimulate economic growth and prosperity. While incubating talent through investments in employee training and education is important, the regions that can successfully attract and retain talent will ultimately be the most competitive.

The Talent Index is used to measure the amount of Talent within a region. Talent is measured as the percentage of a region’s workforce that is employed in Creative Class occupations. The Creative Class is largely responsible for generating the new and creative ideas that support economic growth. The Creative Class is individuals’ who are often engaged in either complex problem solving or in the generation of new ideas, new technology, and new creative content. This occupational grouping includes people employed in management, finance, law, healthcare, science, engineering, architecture, design, education, arts, music, and entertainment.

The Creative Class in India comprises approximately 14% of the workforce, but varies considerably from region to region. Twelve States and Union Territories have over 20% of their workforce employed in the Create Class. Those scoring highest are: Nagaland (35.5%), Arunachal Pradesh (29.5%), Mizoram (29.1%) and Chandigarh (28.2%).

Within India, the Far North, Far East, and Southern States and Union Territories appear to have higher concentrations of the Creative Class than central and western regions. High performing regions tend to have lower overall populations than the low performing regions. Due to smaller populations, the proportion of the population employed in management and professional occupations is relatively higher compared to the same in more populous regions. This inflates the Creative Class component of the Creativity Index in these regions; thereby inflating their final overall score on the Index.

Approximately 4.1% of Indians over the age over the age of 25 hold a Bachelor’s degree or higher. Like the concentration of the Creative Class, Degree share is not evenly distributed around the country. The states or territories with the highest degree shares are Chandigarh (16.47%), Delhi (13.12%), and Puducherry (8.59%).

The Talent Index combines Creative Class and degree share measures to illustrate which States and Union Territories have been the most successful in attracting and retaining talented individuals. Chandigarh leads all regions followed in second by Delhi, Goa, Kerala and Puducherry.

Technology is a critical component for any region that seeks to achieve economic growth and prosperity and is the final “T” in the 3T analysis. The greater the extent to which technology is part of a region raises the competitiveness of that region by improving the ability of businesses to provide new goods and services and acquire cost-saving advantages, often through productivity gains.

Three composite indexes – Tech Connectivity, Tech Education, and Computer Access are used to calculate a region’s level of technological capability and together, these measures are used to produce what is called the Technology Index. Tech connectivity is composed of three sub-categories: the shares of households per 100,000 with broadband internet access, hard line telephone access, and mobile phone access. Tech education is measured by combining the numbers of universities, colleges, technical colleges, and technical research institutions in a region. Finally, internet connectivity is measured by the share of households with a computer or laptop and access to the internet.

Educational institutions are well distributed around the county with particularly high scores in Mizoram (4.99), Tripura (3.72), and Delhi (3.11).

Approximately 9.5% of the Indian population has access to a computer while certain regions perform considerably higher. Chandigargh (33.2%), Goa (31.1%), and Delhi (29.1%) have the highest rates of computer access.

The leading regions in India that are the most technology sophisticated, according to the Technology Index, are the States and Union Territories in the far north and south. Delhi ranks the highest of all regions followed by Kerala, Mizoram and Karnataka. Similar to the Talent Index, the Tech Index scores appear to be highest in regions with large urban centers and/or strong international economic connections either through trade or tourism.

“Indian states have a rich heritage and culture, but we are simply not able to exploit the possibilities. We need to create some social capital or engagement. We need to engage people outside rather than at home to stimulate creativity. What matters in the end is creating cities that enable technology, talent and tolerance whilst using the unique territorial assets”, opines Dr. Amit Kapoor, Honorary Chairman, IFC & Contributing Advisor on this report.