An innovative solution to job crises 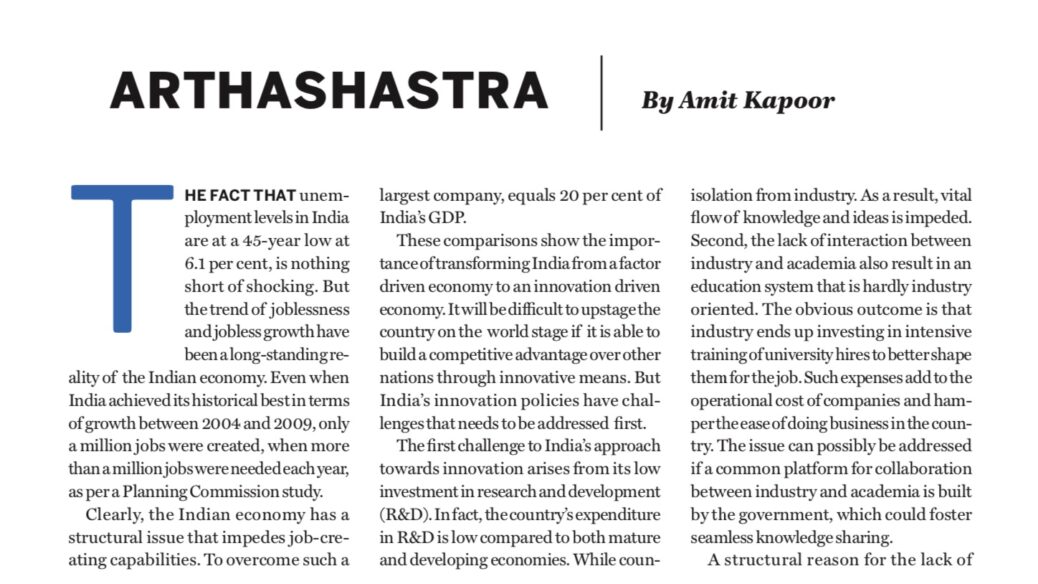 An Innovative Solution to the Job Crisis

The fact that unemployment levels in India at 6.1 percent are at a 45-year low is nothing short of shocking. But the trend of joblessness and jobless growth have been a long-standing reality of the Indian economy. Even during the years between 2004 and 2009 when India achieved its historical best in terms of growth, only a million jobs were created in the entire five-year period when there was a need for more than a million jobs each year, as per a Planning Commission study.

Clearly, the Indian economy has a structural issue that impedes its job-creating capabilities. To overcome such a limitation, the country needs to enhance the productivity levels of its labour so that the economy maintains a competitive edge over its peers and the goods and services produced by them are difficult to replace in the world market. A promising way to achieve such a competitiveness boost is to improve the innovative capacity of the economy.

The economies of US and China have become economic superpowers by working along similar lines. The by-products of the innovation-centric growth by these economies justify the idea of driving competitiveness by itself. The combined market capitalisation of the three-largest IT companies from the US – Apple, Microsoft and Amazon – almost equal the value of India’s GDP. In the case of China, the market cap of Alibaba, the country’s largest company, equals 20 percent of India’s GDP.

These comparisons show the importance of transforming India from being a factor driven economy to an innovation driven economy. If the country can build a competitive advantage over other nations through innovative means, it becomes difficult to be upstaged by another economy on the world stage. But India’s innovation policies have a series of challenges that it needs to address first.

The first challenge in India’s approach towards innovation arises from its low investment in research and development. In fact, the country’s expenditure in R&D is low compared to both mature and developing economies alike. While countries like US and Japan invest close to 3 percent of their GDP in R&D, India invests about 0.67 percent. Moreover, this trend has seen a consistent downward shift after reaching a peak of 0.86 in 2008. An evident implication has been the lack of competitive research facilities in India.

The second issue that needs redressal to improve the research ecosystem in India is the weak linkage between industry and academia. First, the economy misses out on crucial synergy effects that generally arise due to industry-academia linkages as universities tend to focus on research and development in complete isolation with industries. As a result, vital flow of knowledge and ideas is impeded. Second, the lack of interaction between industry and academia also result in an education system that is hardly industry oriented. The obvious outcome is that the industry ends up investing in intensive training of university hires to better shape them for the job. Such expenses add to the operational cost of companies and hamper the ease of doing business in the country. The issue can possibly be addressed if a common platform for collaboration between industry and academia is built by the government, which could foster seamless knowledge sharing.

A structural reason for the lack of proper linkages between industry and academia is the creation of a conflict of interest between the two when it comes to collaborating on innovation. Hardly a few universities have an IPR policy. There is, therefore, a lack of clarity on who owns the IP and how information will be shared between the different parties. Thus, such grey areas make the industry hesitant to collaborate with universities.

These are only a few challenges that ail the Indian innovation ecosystem today. There are further, and more industry-specific, issues that need to be ironed out with time. But these basic ones are a good place to kickstart that journey. Greater innovation would beget improved competitiveness, which would, in turn, transform into jobs. And the latter is the most pertinent issue facing the new government.