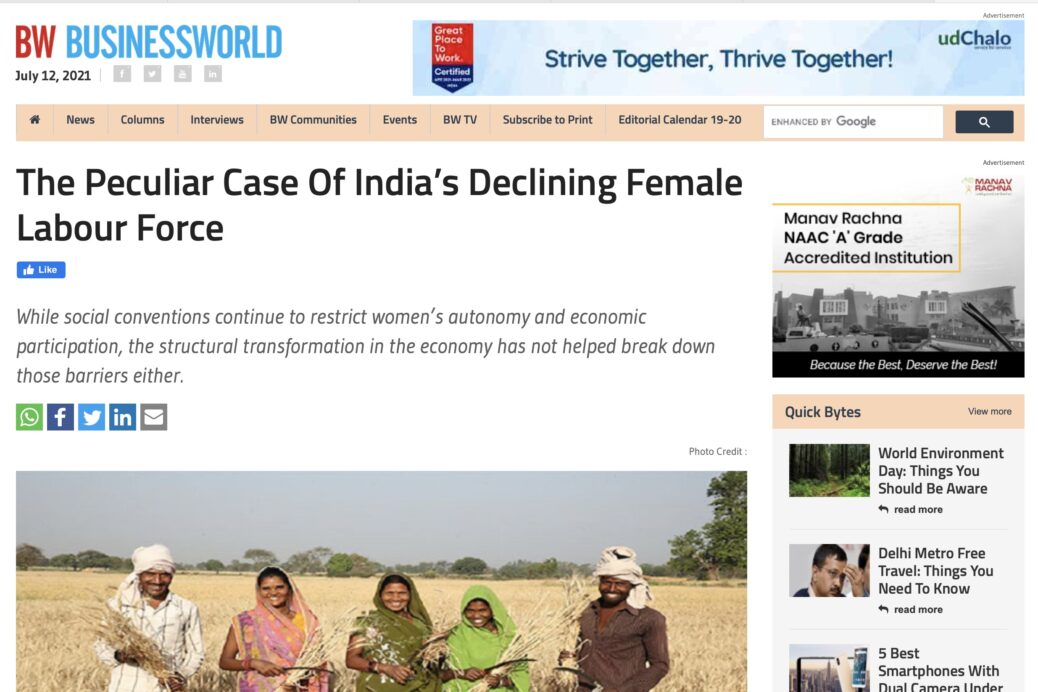 As economies around the world have grown and societies progressed, there has been a marked shift in women’s accepted gender roles. Today, more than ever, women are engaged in economic activities, which is reflected in the rising female labour force participation rate (FLFPR). However, India, one of the fastest growing economies, has emerged as an outlier with its plunging FLFPR. While other growing economies saw a rise in women’s economic participation, India’s FLFPR dipped by 4 percentage points between 1983-2012. India is now one of the 9 countries where FLFPR has fallen. India also has one of the lowest FLFPR, and being one of the most populous countries, it significantly brings down the global performance.

It could be argued that more women who were working for the sake of survival might be withdrawing from the labour market as one’s financial status improved. However, FLFPR trends follow a U-curved trajectory, wherein an initial decline marks a structural change involving better education and opportunities for women, decline in fertility rate, etc., which then leads to a rise in FLFPR. But India is yet to see an upswing in the curve. This phenomenon paints a concerning picture of women’s condition in the Indian society. From the economic perspective, India is losing out on a large section of the workforce that could otherwise contribute to its growth. Women’s economic participation is particularly critical now when the Covid-19 pandemic has devastated the economy. Thus, policymakers must think of a remedy to this issue, and the first step in this direction is to understand its underlying causes.

The issue of low FLFP is very much embedded in our social structure. Even though women’s education and participation in the workforce is acceptable now, social norms dictating their conventional gender roles still hold. The onus of domestic work and caregiving still falls primarily on women. The 2014 OWID data found that India’s female-to-male ratio of time devoted to unpaid care work is the third highest in the world at 9.83. Thus, the burden of domestic work becomes a major impediment to women’s economic participation.

Secondly, while the structural transformation in other countries consequently pushed down the social barriers that kept women from entering the workforce, India’s structural transformation spurred a growth in informal employment. Due to the nature of informal employment and the lack of social security it entails, people remain dependent on their caste and kin networks for financial support during times of crisis. Hence, they continue to uphold the society’s norms and conventions instead of challenging them, which also implies keeping women from seeking employment. Further, social traditions restrict women’s mobility, and the informal jobs do not pay enough or provide job security enough to influence the same, and drive women towards regions that provide employment opportunities.

Moreover, the jobless growth pervading the Indian economy has further shut down opportunities for women. While it has been harsh on men too, data shows women have been impacted disproportionately more than men. Between 2012 and 2018, 65 million men and 63 million women were added in the Indian working age population. The LFPR remained stagnant for men but declined in the case of women. This suggests that the lack of jobs exacerbated the employment inequalities as the job market was able to absorb the additional male workers but not their female counterparts.

Thus, an interplay between social and economic factors has contributed to the rising gender-based economic inequalities. While social conventions continue to restrict women’s autonomy and economic participation, the structural transformation in the economy has not helped break down those barriers either.

The article was published with Business world on June 24, 2021.