The Missing Politics of Inequality 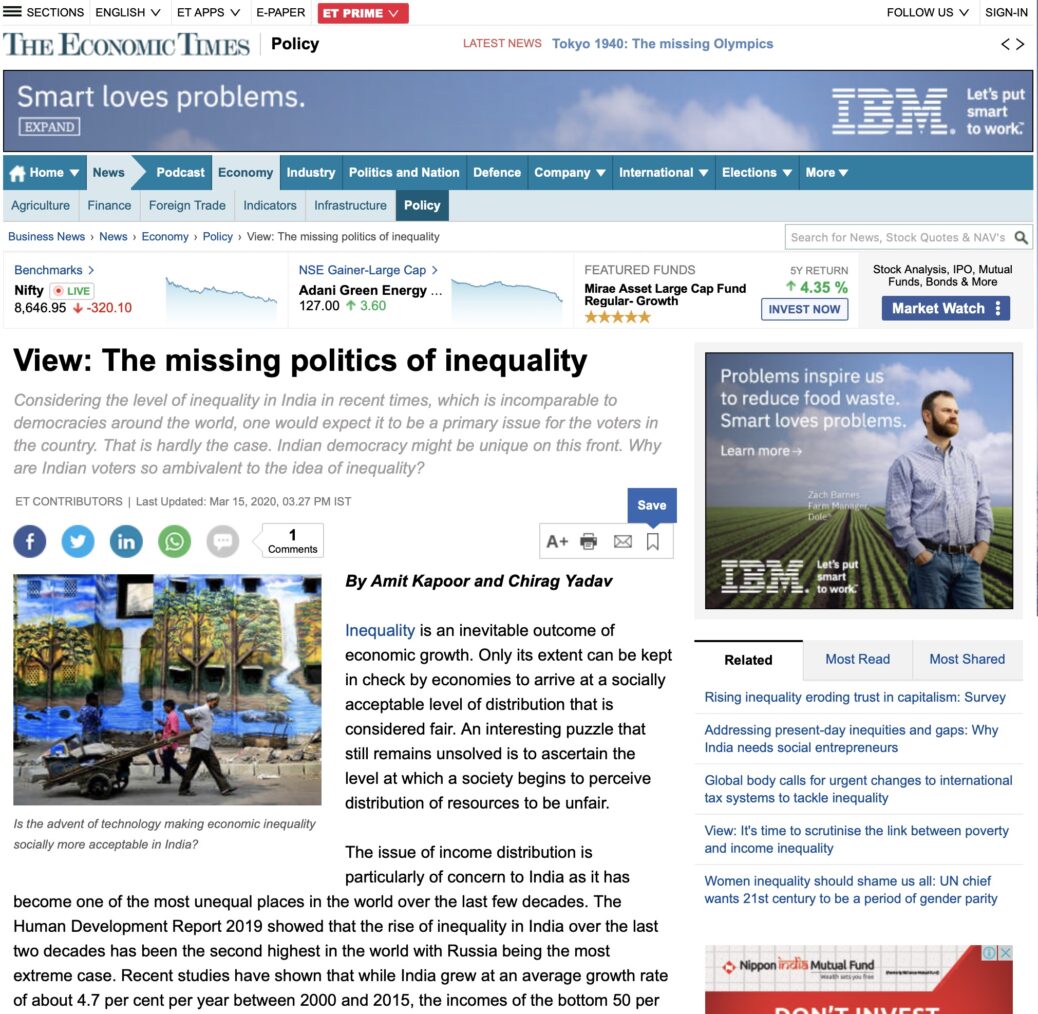 The Missing Politics of Inequality

Inequality is an inevitable outcome of economic growth. Only its extent can be kept in check by economies to arrive at a socially acceptable level of distribution that is considered fair. An interesting puzzle that still remains unsolved is to ascertain the level at which a society begins to perceive distribution of resources to be unfair.

The issue of income distribution is particularly of concern to India as it has become one of the most unequal places in the world over the last few decades. The Human Development Report 2019 showed that the rise of inequality in India over the last two decades has been the second highest in the world with Russia being the most extreme case. Recent studies have shown that while India grew at an average growth rate of about 4.7 percent per year between 2000 and 2015, the incomes of the bottom 50 percent and the next 40 percent of the population grew at about 2 percent per year and the top 1 percent grew at more than 7 percent per year.

It must be noted that this period was marked by a drastic reduction in poverty levels as well, which is inarguably a key developmental outcome. However, there need to be limits beyond which growth concerns should be coupled with how its distribution is taking place across society. This was the crux of the “Sen-Bhagwati debate” that broke out in 2013, which pit the advocates of growth before redistribution (Jagdish Bhagwati) against the advocates of redistribution before growth (Amartya Sen). The academic debate had deeper political undertones as it took place in the run-up to the 2014 general elections.

But the one-off academic debate was an anomaly in India’s political sphere that remains curiously detached from the idea of inequality. Considering the level of inequality in India in recent times, which is incomparable to democracies around the world, one would expect it to be a primary issue for the voters in the country. That is hardly the case. India, for instance, is yet to experience any show of public discontentment against rising inequality to the scale of mass demonstrations it had witnessed against corruption in 2011, which the voters even took to the ballot box as seen in the unambiguous vote against Congress in 2014. Inequality could be said to have been a talking point in the 2019 general elections to the extent that there were political conversations around income transfers to the poor. But those ideas never caught the fancy of the electorate.

Indian democracy might be unique on this front. Inequality has been a primary political issue in elections across the developed (United States) and the developing (Brazil) countries alike. Why, then, are Indian voters so ambivalent to the idea of inequality?

A US economist, Tibor Scitovsky, suggested three criteria when rising inequality is socially acceptable: when it arises out of merit, when there is equality of opportunity, and when there is an improvement in the condition of those at the bottom of the ladder. The latter simply does not hold true for India. Meanwhile, inequality in the modern world has been hardly meritocratic or stemming from equality of opportunity as validated by an Oxfam study, which found that approximately two-thirds of billionaires’ wealth currently is a product of inheritance.

The US economist Albert O. Hirschman might have one argument to offer in the Indian context. He theorised that inequality has different social reactions under different growth phases. In a stagnant economy, inequality is perceived as a zero-sum game where economic advancement of a particular section of society signals a possible deterioration in economic prospects of other sections. On the other hand, when the economy grows at a rapid pace, an improvement in economic advancement of one section of society signals a possibility of a rise in prosperity of the rest. The tolerance levels of society towards inequality in such a case are typically higher.

Hirschman’s arguments could partially explain the tolerance of inequality among Indian voters during the high-growth years that lasted from the turn of the millennium till 2012. However, the Indian economy has entered a low-growth phase since then. It might be the case that the advent of technology has elongated the social acceptance of inequality. Over the last few years, the fall in prices of technology like mobile phones and fast-speed internet has created a few cascading effects. One, it has allowed Indian consumers to access e-commerce services (Amazon and Flipkart) and ride-hailing businesses (Uber and Ola), which has created multiple low-skill employment opportunities. This has probably maintained the sense of prosperity for the lower sections of society. Second, as these technologies have become cheaper, the purchasing power of the masses has increased despite their falling incomes. This could have had an added sense of improving prosperity.

In case these ideas explain the prevailing sense of calm in the Indian voter base at a time when growth is faltering and unemployment levels are peaking, they point to an oncoming burst of resentment and discontentment once the gains from technological advancement peak. India needs to explore avenues of job creation and high growth soon, which might become more difficult in the impending recessionary fears spreading across the world. It is time inequality is addressed in a serious manner in Indian policy circles.

The article was published with Economic Times on March 15, 2020.