Assessing the Regional Competitiveness of the Indian Bioeconomy: Moving Towards A Sustainable, Circular Model 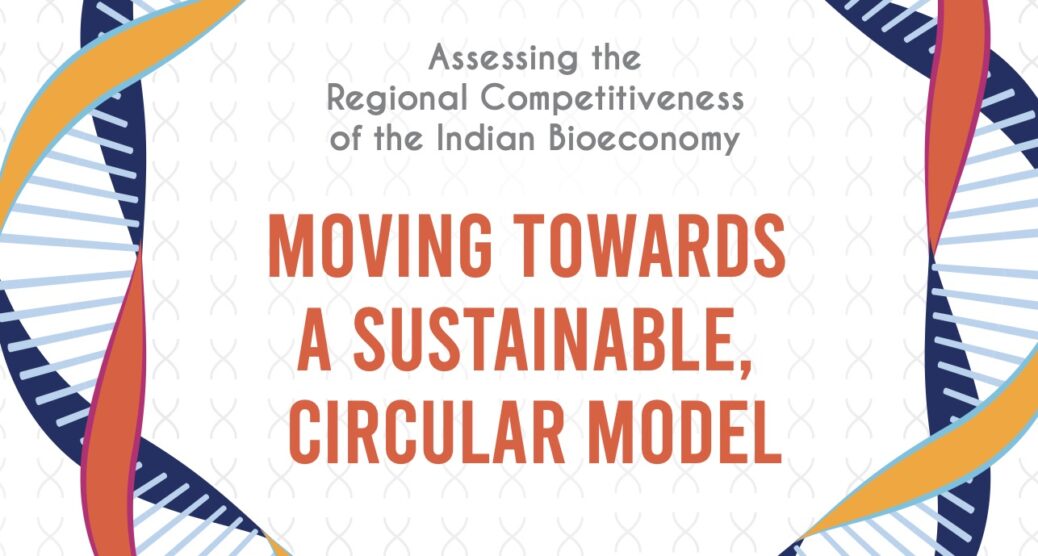 The report analyses the competitiveness of the Indian bioeconomy from the perspective of its regional bio-clusters.

The world is moving towards more sustainable forms of production spurred by global changes in the form of climate change, and ecological degradation. Additionally, there has been rising pressure on food, health, energy resources and basic amenities propelled by an increasing population, especially in India. Thus, one of the ways to meet such challenges would be to shift away from a fossil-fuel development paradigm to bio-based resources dominated trajectory. This will ensure that India can continue on its high growth trajectory without completely depleting its natural resource base.

The Indian Bioeconomy has been growing steadily over the years, with it reaching $51 billion in 2018, realising a 14.68% percent growth from 2017. Considering the growth potential of this sector, it is expected that during the next five years, the Indian Bioeconomy will grow to $150 Billion by 2025. Within this broader domain, the Indian bio-manufacturing would contribute to 66.7% of the projected growth by 2024. The strong position of this sector has been propelled by its inherent performance, and growth drivers, namely: affordable human capital, cost-competitive manufacturing, a multitude of biodiversity, and rising demand for health services. The Indian government has also initiated several projects to improve its basic infrastructure through the initiation of biotech science clusters, biotechnology parks, and incubators. Additionally, missions and targeted schemes such as National Bio-Pharma Mission, Biotech KISAN Programme, Biotech Start-Up Policy and North Eastern Biotechnology Programmes have been implemented to nurture nation-wide and region-wide strengthening of biotechnology activities.

Nonetheless, in order to build a strengthened Indian bio-manufacturing hub and bioeconomy, structural reforms are required to be implemented. This would involve that the Indian biomanufacturing needs to move beyond cost-competition and focus on creating high-value, specialized products that would give them an edge over other countries.  Additionally, states would also need to orient their bioeconomy strategies with the national vision by driving the growth of their clusters through better incentive models. The formulation of region-wide strengthened clusters also provides India with a perfect opportunity to shift towards a Sustainable, Circular Bioeconomy model. This would not only enable the creation of new market and job opportunities but also aid in the protection of the environment and biodiversity. The necessity of creating sustainable production processes has also been highlighted by NITI Aayog in its strategy to advance India towards a resource-efficient and circular economy.

Against this backdrop, this report analyses the competitiveness of the Indian bioeconomy from the perspective of its regional bio-clusters. It starts by analysing the concept of the circular bioeconomy and why it would be beneficial for the Indian bio-based industry to uptake the same. This is further strengthened with India’s position in the global bioeconomy, the key enablers and the future growth opportunities that could allow the transition in a phased manner. Furthermore, the cluster mapping for the Indian bioeconomy has been carried out by drawing conceptual antecedents from “Clusters: The Drivers of Competitiveness” – a report submitted to the Economic Advisory Council to the Prime Minister (EAC-PM). Based on the analysis of the cluster strength of the States and Union Territories, policy recommendations have been provided to enhance the regional competitiveness of India’s bioeconomy.

The report suggests that there is an urgent need to move away from the traditional concept of clusters and build a holistic cluster environment that should have strengthened linkages with the labour force, allied industries, research hubs, financial institutions and consumers.  In lieu of the findings, policy actions have been suggested on – strengthening region-wide bioeconomy clusters, enabling performance tracking and data management across the sectors of Indian bioeconomy, enhancement of facilitating factors as well as the development of sustainable, circular bioeconomy within India.

The report was done in collaboration with Department of Biotechnology, Biotechnology Industry Research Assistance Council and was released on March 20, 2020.