Taking Competitiveness to the next level 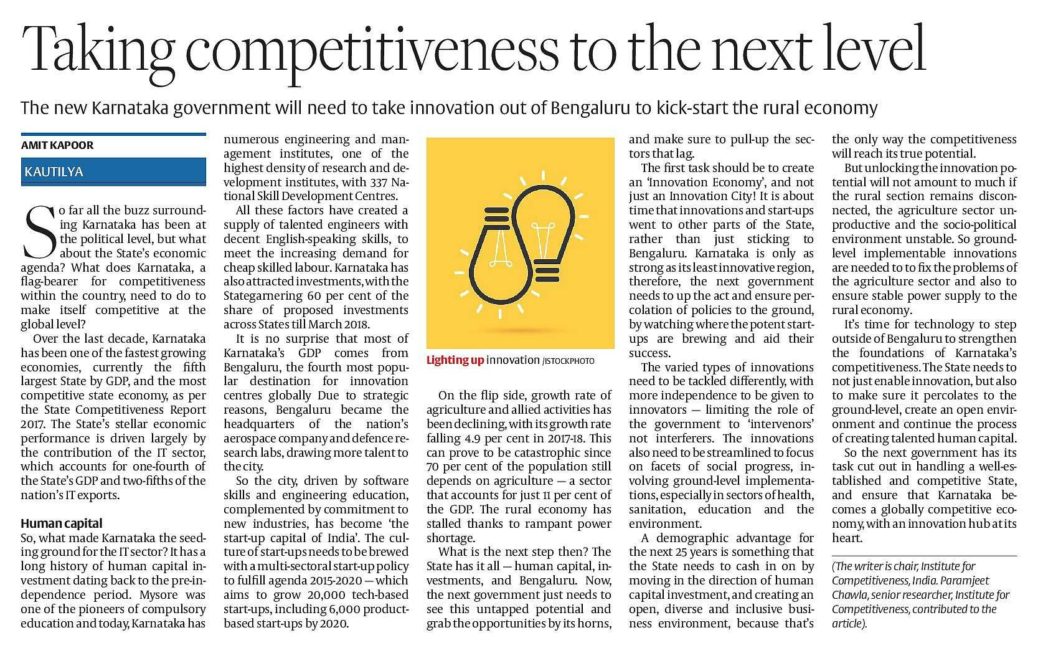 Taking Competitiveness to next level

So far all the buzz surrounding Karnataka has been at the political level, but what about the State’s economic agenda? What does Karnataka, a flag-bearer for competitiveness within the country, need to do to make itself competitive at the global level?

Over the last decade, Karnataka has been one of the fastest growing economies, currently the fifth largest State by GDP, and the most competitive state economy, as per the State Competitiveness Report 2017. The State’s stellar economic performance is driven largely by the contribution of the IT sector, which accounts for one-fourth of the State’s GDP and two-fifths of the nation’s IT exports.

So, what made Karnataka the seeding ground for the IT sector? It has a long history of human capital investment dating back to the pre-independence period. Mysore was one of the pioneers of compulsory education and today, Karnataka has numerous engineering and management institutes, one of the highest density of research and development institutes, with 337 National Skill Development Centres.

All these factors have created a supply of talented engineers with decent English-speaking skills, to meet the increasing demand for cheap skilled labour. Karnataka has also attracted investments, with the Stategarnering 60 per cent of the share of proposed investments across States till March 2018.

It is no surprise that most of Karnataka’s GDP comes from Bengaluru, the fourth most popular destination for innovation centres globally Due to strategic reasons, Bengaluru became the headquarters of the nation’s aerospace company and defence research labs, drawing more talent to the city.

So the city, driven by software skills and engineering education, complemented by commitment to new industries, has become ‘the start-up capital of India’. The culture of start-ups needs to be brewed with a multi-sectoral start-up policy to fulfill agenda 2015-2020 — which aims to grow 20,000 tech-based start-ups, including 6,000 product-based start-ups by 2020.

On the flip side, growth rate of agriculture and allied activities has been declining, with its growth rate falling 4.9 per cent in 2017-18. This can prove to be catastrophic since 70 per cent of the population still depends on agriculture — a sector that accounts for just 11 per cent of the GDP. The rural economy has stalled thanks to rampant power shortage.

What is the next step then? The State has it all — human capital, investments, and Bengaluru. Now, the next government just needs to see this untapped potential and grab the opportunities by its horns, and make sure to pull-up the sectors that lag.

The first task should be to create an ‘Innovation Economy’, and not just an Innovation City! It is about time that innovations and start-ups went to other parts of the State, rather than just sticking to Bengaluru. Karnataka is only as strong as its least innovative region, therefore, the next government needs to up the act and ensure percolation of policies to the ground, by watching where the potent start-ups are brewing and aid their success.

The varied types of innovations need to be tackled differently, with more independence to be given to innovators — limiting the role of the government to ‘intervenors’ not interferers. The innovations also need to be streamlined to focus on facets of social progress, involving ground-level implementations, especially in sectors of health, sanitation, education and the environment.

A demographic advantage for the next 25 years is something that the State needs to cash in on by moving in the direction of human capital investment, and creating an open, diverse and inclusive business environment, because that’s the only way the competitiveness will reach its true potential.

But unlocking the innovation potential will not amount to much if the rural section remains disconnected, the agriculture sector unproductive and the socio-political environment unstable. So ground-level implementable innovations are needed to to fix the problems of the agriculture sector and also to ensure stable power supply to the rural economy.

It’s time for technology to step outside of Bengaluru to strengthen the foundations of Karnataka’s competitiveness. The State needs to not just enable innovation, but also to make sure it percolates to the ground-level, create an open environment and continue the process of creating talented human capital.

So the next government has its task cut out in handling a well-established and competitive State, and ensure that Karnataka becomes a globally competitive economy, with an innovation hub at its heart.

The article was published with The Hindu Business Line on May 24, 2018.