Remember the debilitating crisis of 2008? Something scarier is heading your way 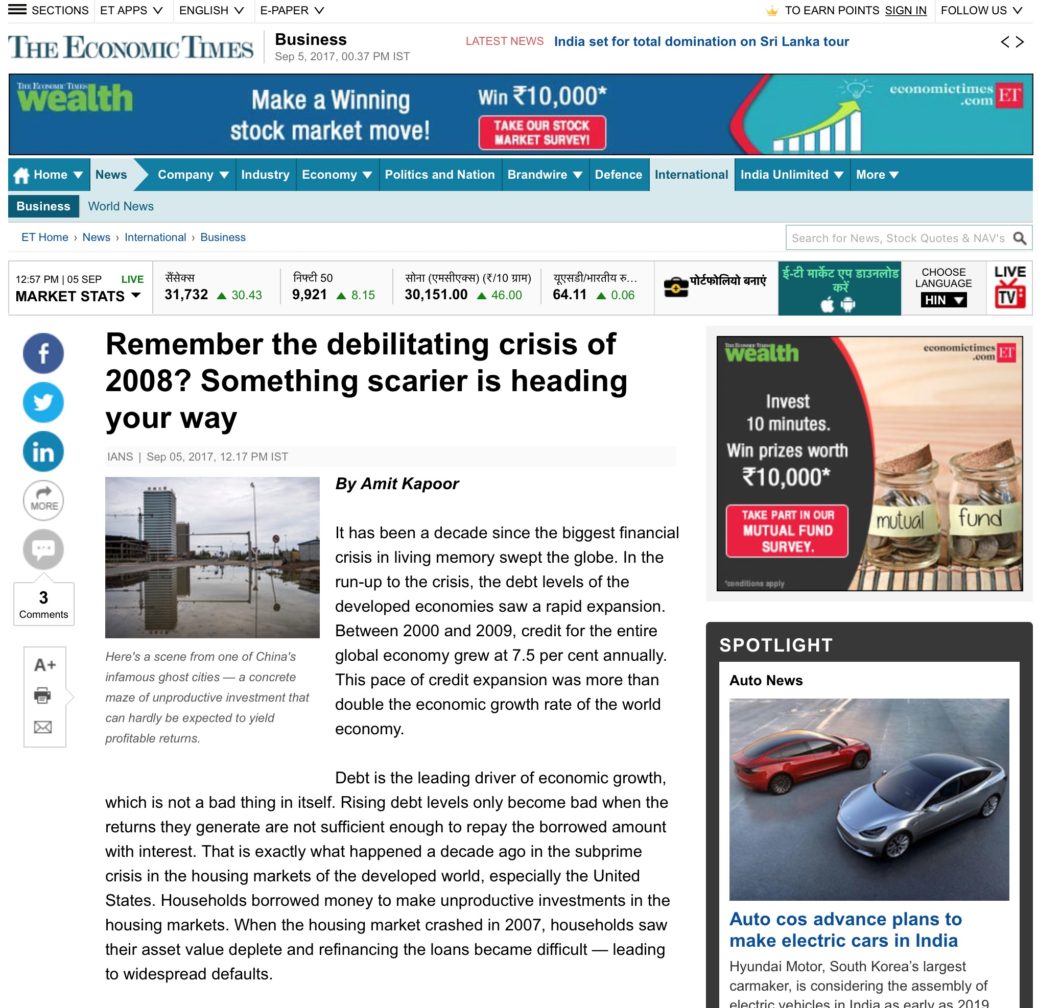 It has been a decade since the biggest financial crisis in living memory swept the globe. In a run up to the crisis, the debt levels of the developed economies saw a rapid expansion. In between 2000 and 2009, credit for the entire global economy grew at 7.5 percent annually. This pace of credit expansion was more than double the economic growth rate of the world economy.

Debt was the leading driver of economic growth, which is not a bad thing in itself. Rising debt levels only become bad when the returns they generate are not sufficient enough to repay the borrowed amount with interest. That is exactly what happened a decade ago in the subprime crisis in the housing markets of the developed world, especially the United States. Households borrowed money to make unproductive investments in the housing markets. When the housing market crashed in 2007, households saw their asset value deplete and refinancing the loans became difficult leading to widespread defaults.

By the time the crisis hit, the US needed a debt of $4 to $5 to generate $1 of economic growth, according to Federal Reserve statistics. Compare this to the 1950s when US merely required $1 to $2 of debt for an additional $1 of GDP. The case was similar in other developed countries where debt levels had reached three to four times the GDP level, which has only happened in wartimes earlier. Surely, we must have learnt not to accumulate such high levels of debt unless they are devoted to productive investments. It turns out that was not the case.

China is currently on a path that is eerily similar to the pre-crisis US. In fact, it is in a much worse state by some standards. Currently, the country needs $6 to $8 of debt to achieve an economic growth of $1, compared to $1 to $2 only a decade ago. China’s debt as a percentage of its GDP, which had hovered around 150 in the first decade of the century has shot up to 256 percent in the last 7 years. Such a rapid expansion in debt levels is worrisome for the country as well as the entire global economy.

As exports fell after the crisis, the Chinese government resorted to stimulate the economy with high levels of infrastructure spending. The Chinese local governments and state-owned companies borrowed heavily to build cities and roads at an unprecedented pace. “Unprecedented” is an understatement. In merely three years between 2011 and 2013, China used more cement than the US did in the entire 20th century! A lot of this construction was undertaken in the hope that people will move into them. However, even though the urban migration in China has been quite dynamic, it could not keep up with the shockingly rapid pace of construction and it eventually led to the creation of China’s infamous ghost cities; a concrete maze of unproductive investment that can hardly be expected to yield profitable returns. The situation resembles the economic crisis of 2008 in that money invested in houses is not yielding commensurate returns affecting the quality of credit.

As long as growth remains intact, asset prices will rise and high debt levels will not be of concern. Problems will escalate once the Chinese economy falters for one reason or another and will pose a threat to the repayment mechanism that is in place. An economic disaster will not be unfathomable in such a scenario.

However, the major difference in the current context is the Chinese government’s mountain of reserves and its unwillingness to get off the growth bandwagon. Any threat to China’s growth due to unsustainable debt levels will be dealt with commensurate bailout packages to even private companies if the need arises. The incentive problem that held back the US government from doing so in 2008 will not be a constrain for China if its growth is at stake.

The government has also taken some steps to deal with the debt problem. It intends to reduce the corporate debt burden through instruments like debt-for-equity swaps, which effectively convert debt into shares and puts the risk onto the shareholders instead of the debt holders. Only time will tell if the Chinese government will be able to steer itself away from a full-blown crisis.

Leaving China aside, the global situation is not particularly better. The total global debt has reached historical highs of 325 percent of GDP mainly led by government debt, unlike China where corporates along with households have been heavy borrowers. Average global government debt has risen the most among different sectors from below 60 percent of the GDP before the crisis to around 90.

Nevertheless, even on a global scale, non-financial corporates hold the largest debt exactly like China having taken advantage of the cheap money available at low interest rates across the globe, which was done in an attempt to boost economic activity after the crisis. Even India’s private sector debt, which is comparatively low according to world standards at $105 billion, has risen from $59 billion in 2008. As quantitative easing across the developed world ends and the interest rates start rising, debt servicing will become increasingly difficult and if economic growth is not forthcoming, all hell will break loose. The response of global economies to their respective debt levels will define the possibility of the next crisis. Hopefully, the ghost of crisis past will not visit us this Christmas.

The article was published with Economic Times, Business Standard , Millennium Post on September 5, 2017.