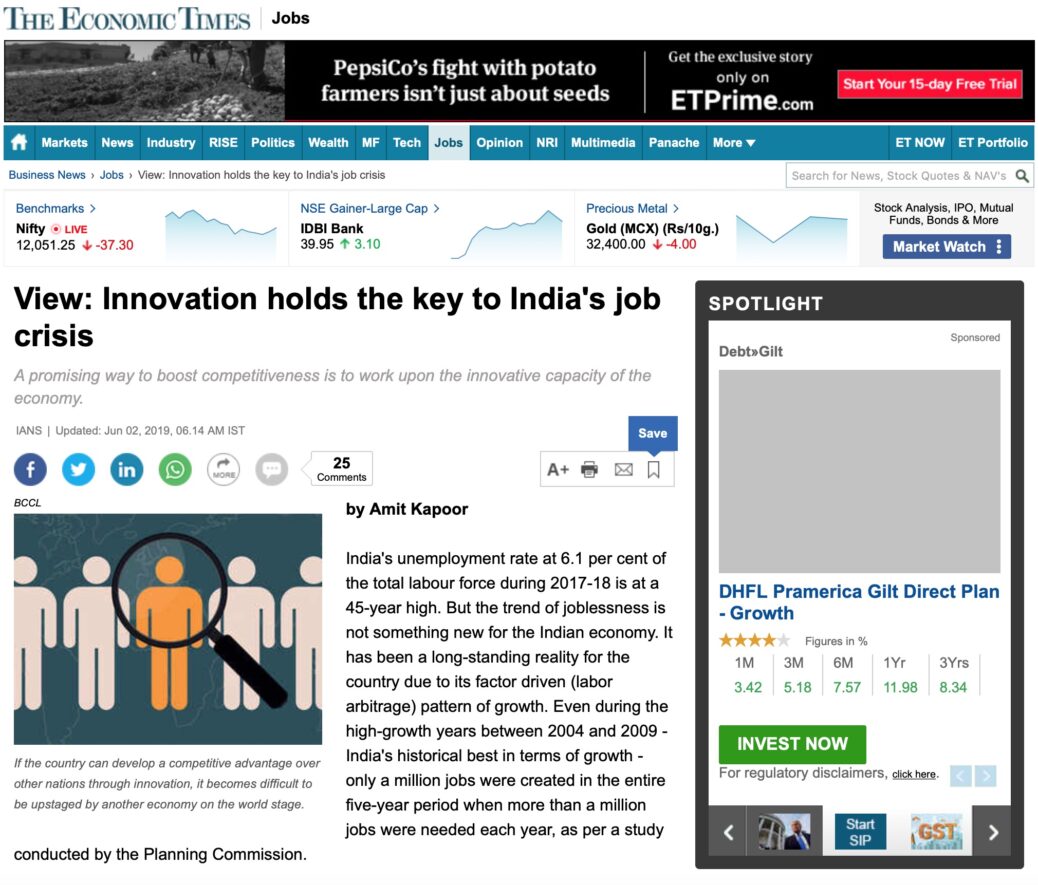 India’s unemployment rate at 6.1 percent of the total labour force during 2017-18 is at a 45-year high. But the trend of joblessness is not something new for the Indian economy. It has been a long-standing reality for the country due to its factor driven (labor arbitrage) pattern of growth. Even during the high-growth years between 2004 and 2009 – India’s historical best in terms of growth – only a million jobs were created in the entire five-year period when more than a million jobs were needed each year, as per a study conducted by the Planning Commission.

So, the Indian economy has a structural reason for its lack of a job-creating capacity. The country needs to enhance its competitiveness, that is its productivity levels, to overcome such a limitation. A promising way to achieve such a boost in competitiveness is to work upon the innovative capacity of the economy. Both US and China have become economic superpowers by working along similar lines.

The by-products of the innovation-building efforts by these countries justify the idea of driving competitiveness by itself. The combined market cap of the three-largest IT companies from the US – Apple, Microsoft and Amazon – equal India’s GDP as a whole. In the case of China, the market cap of its largest company, Alibaba, equals 20 percent of India’s GDP.

Such comparisons show why India needs to transform itself from a factor driven to an innovation-led economy. If the country can develop a competitive advantage over other nations through innovation, it becomes difficult to be upstaged by another economy on the world stage. But India’s innovation policies have a series of challenges that it needs to address first.

The first issue that India needs to work upon is the strengthening of its industry-academia linkages. Universities are seen as hubs of research and innovation around the world. There are two specific roles that universities are intended to play – knowledge creation and knowledge transfer. In India, the latter is often overlooked. Even if the process of knowledge creation is fulfilled albeit with issues of quality, the mechanism of knowledge transfer between universities themselves and with industry is quite limited. There are a few issues which arise due to such lack of linkages.

First, as universities work on the same issues in isolation without consulting and collaborating with one another, they fail to create crucial synergy effects that impede the flow of knowledge and ideas. Second, the Indian education system is hardly industry-oriented due to lack of interaction between the two. As a result, the industry has to invest in months of intensive training for freshly hired graduates. This adds to their operational costs and proves inimical to the ease of doing business within the country. The government can possibly address this issue by providing a platform for collaboration between industry and academia that would foster greater knowledge creation and dissemination.

A structural reason for the lack of proper linkages between industry and academia is the creation of a conflict of interest between the two when it comes to collaborating on innovation. Hardly a few universities have an IPR policy. There is, therefore, a lack of clarity on who owns the IP and how information will be shared between the different parties. Thus, such grey areas make the industry hesitant to collaborate with universities.

The second challenge in India’s approach towards innovation arises from its low investment in research and development. India’s R&D expenditure is low not only compared to the mature economies but also compared to emerging economies. India invests 0.67 percent of GDP in R&D while mature economies like US, Japan etc invest around 3 percent of their GDP. It is more worrisome that the this has consistently fallen in the last decade after reaching a peak of about 0.86 in 2008. The impact of this low investments is research and development is quite evident in the lack of world class R&D infrastructure facilities in India.

The third challenge lies in the country’s IP regime. The two main aspects of India’s IP Regime that are at the core of conflict between the government and the industry are: Section 3(d) of the Patents (Amendment) Act of 2005 and the propensity to grant compulsory licenses. Most of these issues primarily pertain to the Indian pharmaceutical industry but they are a serious challenge, nonetheless. Section 3(d) is mainly criticised for setting a higher standard for patentability than mandated by TRIPS. The industry is of the view that the additional requirement of enhanced efficacy by India discourages incremental innovation and impacts the foreign investment. The government, however, maintains the stand that it is TRIPS compliant. Compulsory licensing gives rights to the Controller to suspend patent privileges in cases where the best interests of their citizens are at stake or there is a wilful exploitation of patent privileges by the patentee. The industry claims that lack of clarity from the government is keeping many firms out of India. However, the government holds the view that the country has used this privilege just once in the past. In such a case it is important for the Indian government and the industry to chalk out a plan of action that will be beneficial for both the innovators as well as the general public.

The challenges facing the Indian economy to become innovation-led do not end there. There are further issues which need to be ironed out with time, but these would be a good place to kickstart that journey. Innovation begets competitiveness and competitiveness begets jobs. And the latter is the thorniest issue facing the economy and the new government as of today.

The article was published with Economic Times and CNBC TV18 on June 1, 2019