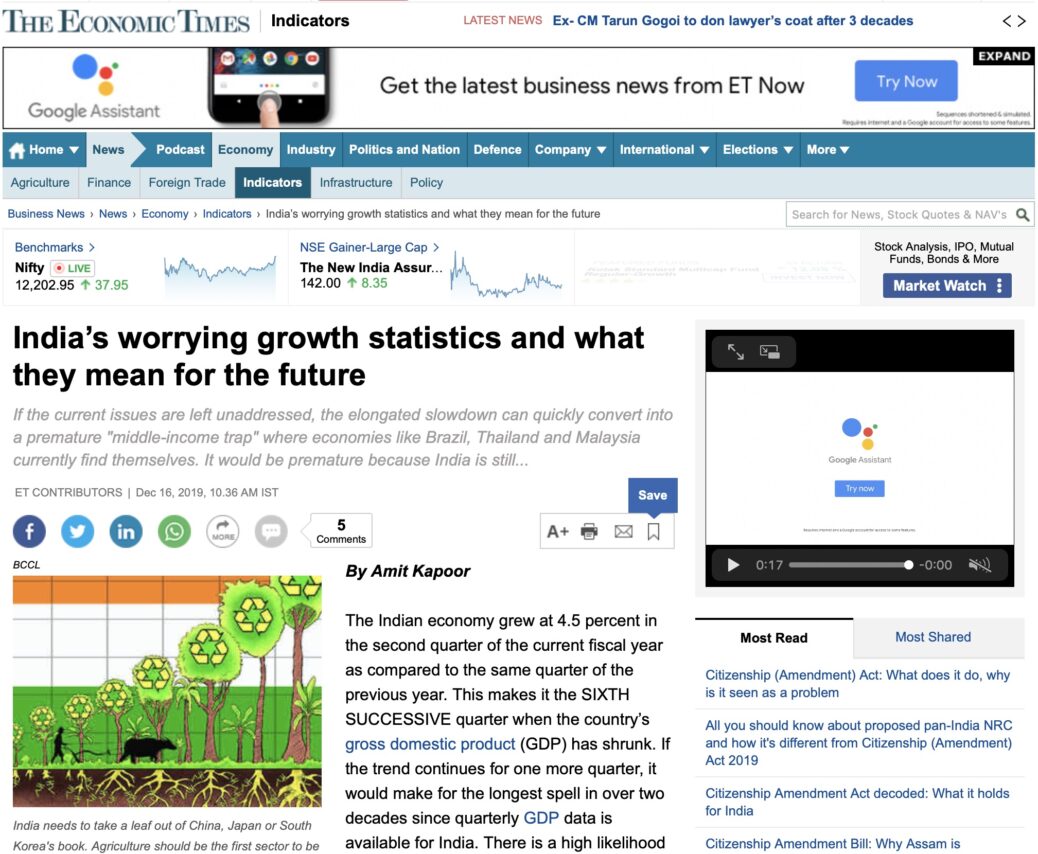 The Indian economy grew at 4.5 percent in the second quarter of the current fiscal year as compared to the same quarter of the previous year. This makes it the sixth successive quarter when the country’s gross domestic product (GDP) has shrunk. If the trend continues for one more quarter, it would make for the longest spell in over two decades since quarterly GDP data is available for India. There is a high likelihood of such a scenario fructifying. The data shows why this is the case.

To understand the GDP numbers better, it is crucial to understand the components of the measure. GDP is a sum of four values: government expenditure, consumption, investment and net exports. If the first component of GDP is removed, the value would denote the non-government part of the economy. In the second quarter of the current fiscal, this grew at 3.05 percent – exactly 150 basis points lower than the overall GDP growth.

The poor performance of the non-government part of the GDP is taking place because investment in the economy has stalled, consumption is muted, and exports are barely growing. Investment growth fell to 1 percent in the last quarter, which has been the trend for over a year. Low investment has been primarily led by weak consumer demand. Even though consumption has slightly picked up in the last quarter, sales of all consumer products from cars to toothpastes has fallen. The latest export numbers also show a degrowth by 1.1 percent in October.

There are limits to the extent to which government stimulus can drive the Indian economy. First, government expenditure accounts for just above 10 percent of India’s GDP. Second, in an economy that has stagnated, tax collections start to taper off. This is already showing up in the data. In the first seven months of the current fiscal year, the government has collected merely Rs 10.52 trillion and is likely to fall well short of its target of Rs 24.61 trillion that it has set for the entire year. The dividend from the RBI of Rs 1.76 trillion and its earnings through disinvestment can help bridge the gap to a certain extent. But sooner or later, the government will have to move beyond stimulating growth through spending and address the fundamental causes of the slowdown.

While some of the cause for the downturn can be attributed to the global economy, the burden of internal factors is quite overwhelming. What needs to be understood is that the current growth slowdown is not cyclical in nature. The growth in India has been historically consumption-led as evidenced in its consistent double-digit imports against weak exports. In fact, currently almost 60 percent of India’s GDP is determined by consumption. But this primary component of the economy has dropped from double digits in the second quarter of last fiscal to 3.1 percent and 5.1 percent in the first two quarters of the current fiscal respectively. Such worrying trends had not even occurred as a result of the 2008 crisis.

Thus, the numbers show that the slowdown must have structural reasons. In such a situation, a revival cannot be expected using the usual Keynesian tinkering through higher government expenditure. The twin balanced sheet problem of over-leveraged companied and bad-loan-burdened banks is only one sign of the structural issues ailing the Indian economy. There are even deeper concerns that need to be addressed. First, India needs to avoid drawing lessons from the Western economies, which grew amidst a different global scenario under very different conditions. Successful Asian economies hold much vital lessons for it. Most successful economies in the East like China, Japan, and South Korea first reformed their agriculture sectors by not aiming for scale but for efficiency through competition among small farms. India needs to adopt a similar approach. Agriculture should be the first sector to be reformed.

Second, in a similar approach adopted by the East, India needs to focus on strengthening its human capital through higher investment in health and education. This would go a long way in building the country’s manufacturing strength as well just like China did in 1980s. It does not help India’s long-run growth if it keeps losing out on low-skill manufacturing to countries like Bangladesh and Vietnam. There are evident structure concerns with the Indian economy that make India unattractive to global manufacturers. Beyond skill, there are issues of regulation and infrastructure that impede investment in the sector as well.

If such issues are still left unaddressed, the elongated slowdown can quickly convert into a premature “middle-income trap” where economies like Brazil, Thailand and Malaysia currently find themselves. It would be premature because India is still far behind the income levels that those countries have managed to achieve during their high-growth years. The next few years would decide India’s place in the world for decades to come.

The article was published with Economic Times on December 16, 2019