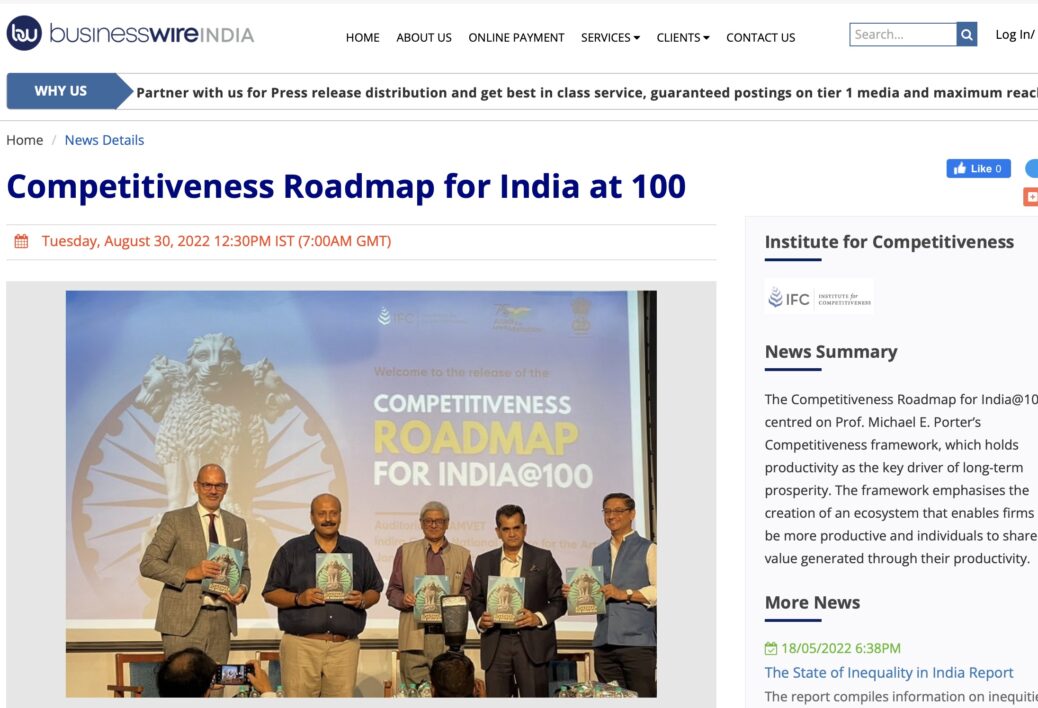 The Competitiveness Roadmap for India@100 is centred on Prof. Michael E. Porter’s Competitiveness framework, which holds productivity as the key driver of long-term prosperity. The framework emphasises the creation of an ecosystem that enables firms to be more productive and individuals to share the value generated through their productivity. Based on this, the India@100 roadmap guides India in its journey towards becoming a high-income country by 2047. The new guiding principles rest on a renewed development approach. The approach to achieving prosperity, as per the roadmap, lies with the “4 S” guiding principles, which emphasise the necessity for growth to be accompanied by social progress, to be shared across the country, to be in line with environmental sustainability, and to be solid in the face of external shocks. The roadmap also lays down key action areas that are crucial in India’s pathway to attaining a high-income status. Some of the significant action areas are creating more competitive jobs, elevating labour productivity levels, boosting the economy’s ability to mobilise the labour force, and ensuring effective policy implementation.

In his message to the august gathering, Prof Michael E Porter highlighted the strengths of the competitiveness framework that forms the basis of the roadmap and helps translate the diagnostics on competitiveness fundamentals into actionable insights. He added, “The solutions to the challenges faced do not lie in narrow interventions. A clear strategy identifying key priority areas is a prerequisite to achieving greater progress”. The roadmap thoroughly analyses India’s current competitiveness in the diagnostics section and provides a detailed view of the strategies to be adopted for India’s future growth pathway. Further, Dr Amit Kapoor stated, “To sustain long-term economic growth, the Competitiveness roadmap has the potential to guide India’s economic and social policy. The roadmap takes into account the unique features of India, and proposes a set of guiding principles, policy goals, and an implementation architecture”.

The roadmap was presented by Dr Christian Ketels, who discussed the need to look at individual sectors’ and locations’ potential to build India’s overall national value proposition. For this, developing a thorough understanding of India’s advantages and areas for improvement is necessary. Adding to the importance of mapping out India’s distinctive characteristics. He asserted, “India’s performance has global ramifications. How India addresses its competitiveness challenges and harnesses opportunities will affect how different countries address challenges they face”.

Further emphasising another major action area, Dr Bibek Debroy, Chairman, EAC-PM, stated in the keynote address, “Government policies shape the context in which enterprises and individuals function. For the Indian development trajectory to reach higher levels of competitiveness,  the focus must be on government policies and the enterprises and individuals functioning in the environment shaped by these policies”.

The roadmap undertakes a renewed development approach that identifies the significance of people and industries. Further emphasising this point, Amitabh Kant, G20, Sherpa, stated, “A growth model that sustains in the long-term must give equal importance to facilitating ease of living for its people and ease of doing business for its industries”. While achieving the set ambitions is necessary, the journey of getting them is also equally significant. He added, “The roadmap proposes major changes in the principles underlying our policy approach. They are vital to moving India to the high-income group”.

The roadmap sets the premise for a transformed approach to augment India’s growth. Both the structural transformations outlined and the integration of economic and social progress will be of utmost importance in the coming decades. Going forward, the target would be to develop KPIs and formulate roadmaps for various industries, ministries, and states so as to traverse toward the country’s ambitions.

The Press Release could also be seen at https://www.businesswireindia.com/competitiveness-roadmap-for-india-at-100-80415.html