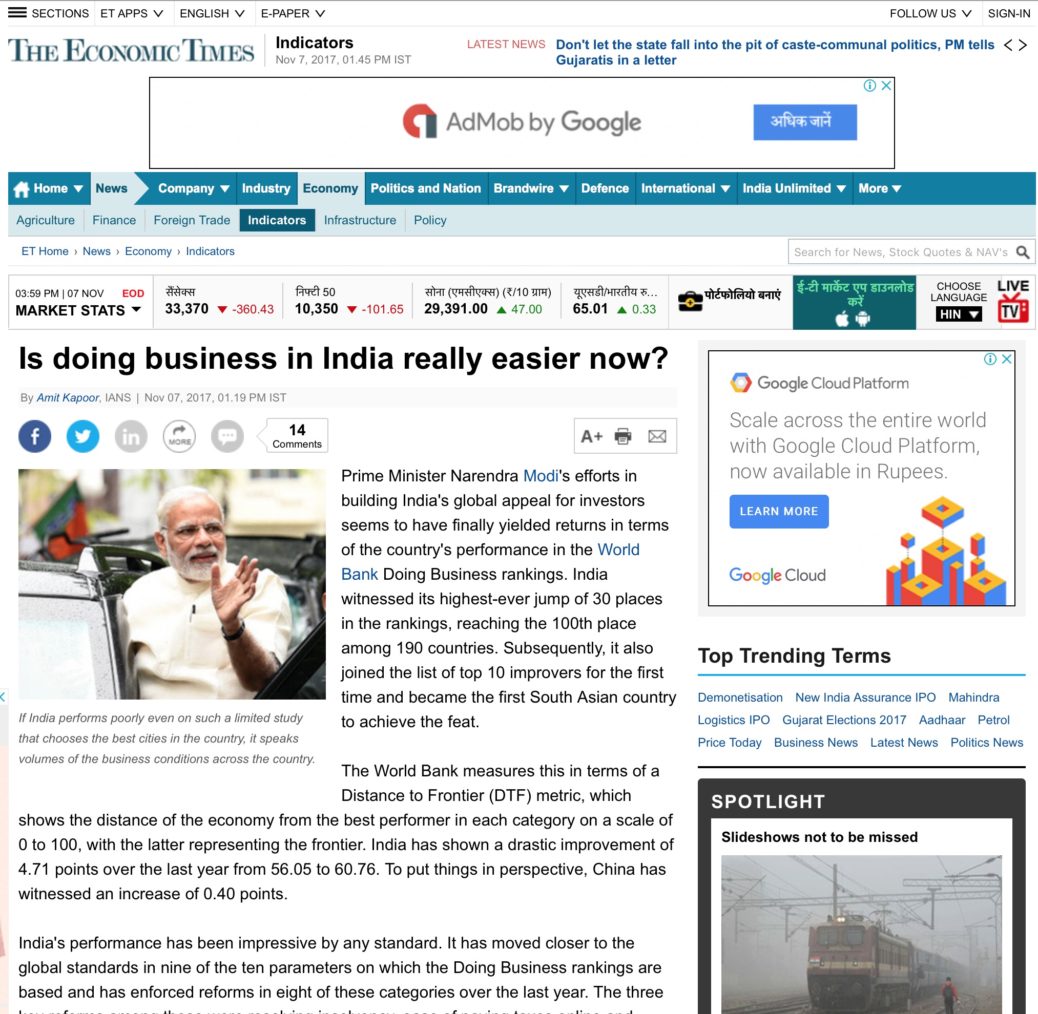 Modi’s efforts in building India’s global appeal to investors seems to have finally yielded returns in terms of the country’s performance in the World Bank Doing Business rankings. India witnessed its highest ever jump of 30 places in the rankings reaching the 100th place among a total of 190 countries. Subsequently, it also joined the list of top 10 improvers for the first time and became the first South Asian country to achieve the feat.

The World Bank measures this in terms of a Distance to Frontier (DTF) metric, which shows the distance of the economy from the best performer in each category on a scale of 0 to 100 with the latter representing the frontier. India has shown a drastic improvement of 4.71 points over the last year from 56.05 to 60.76. To put things in perspective, China has witnessed an increase of 0.40 points.

India’s performance has been impressive by any standard. It has moved closer to the global standards in nine of the ten parameters on which the Doing Business rankings are based and has enforced reforms in eight of these categories over the last year. The three key reforms among these were resolving insolvency, ease of paying taxes online and protection of minority investors. Despite these improvements, the general sentiment has been to dismiss the rankings mainly for the flaws in its methodology.

First, the rankings are based on perception surveys of few entrepreneurs or professionals based on questions that are mostly subjective in nature. Second, they are not even based on the economic conditions of the entire economy but one or two cities within a nation. For India, it is based on Delhi and Mumbai alone. However, the critics miss the point.

If India performs poorly even on such a limited study that chooses the best cities in the country, it speaks volumes of the business conditions across the country and is indicative of the scope of improvement that remains. Moreover, rankings are relative by definition and since the World Bank chooses a maximum of two cities for other countries as well, it should depict a near accurate performance of any country on a relative scale. Therefore, any improvement up the ladder cannot be summarily dismissed.

Further, reforms considered by the World Bank include a mix of central and state initiatives. Passing of central legislations like the Insolvency and Bankruptcy Code, 2016 that helped India jump from a rank of 136 to 103 in the ‘resolving insolvency’ parameter have pan-India benefits and are not just limited to Delhi and Mumbai. Therefore, it would be incorrect to presume that merely focussing on a few cities is disassociated from reality even though the actions of state governments are not reflected.

Incidentally, India performs poorly in parameters where state government interference is maximum: getting an electricity connection, starting a business and registering a property. This underlines the importance of policy coordination between the States and the Centre. Nevertheless, credit needs to be given where it is due for an improvement in rankings majorly driven by reforms undertaken by the central government over the last few years. It must be noted that the rankings have not taken into account the implementation of the Goods and Services Tax (GST). Therefore, considerable potential remains for further improvements in ranking.

But, it should also be kept in mind that these rankings are not an end in themselves and are far from perfect. A lot of it is based on policies which are on the books and does not necessarily capture the real experiences on the ground. After reforms are initiated to ease the business environment, the main task of implementation begins where the real problems emerge. For instance, the World Bank applauded India’s efforts at increasing access to credit with the adoption of a new insolvency and bankruptcy code. However, the parameters fail to recognise the problem that India is going through one of its slowest phases of credit growth and that banks are wary of lending so easily.

Moreover, a lot more parameters apart from the ones considered in the Doing Business rankings need to be considered to understand the business environment in India. India’s dismal performances in the Heritage Foundation’s Index of Economic Freedom, in which India is ranked 143 below most of its South Asian neighbours, and Transparency International’s Corruption Perception Index, in which India is ranked 79th, reflect the areas that the country still needs to improve upon to better the business environment. Therefore, the chest-thumping around the Doing Business ranking improvements need to be seen in conjunction with these factors and worked upon to ease the problems faced by common businessmen. A premature celebration can be counter-productive.

The article was published with Economic Times and Business Standard on November 7, 2017.