A budget of good politics and economics 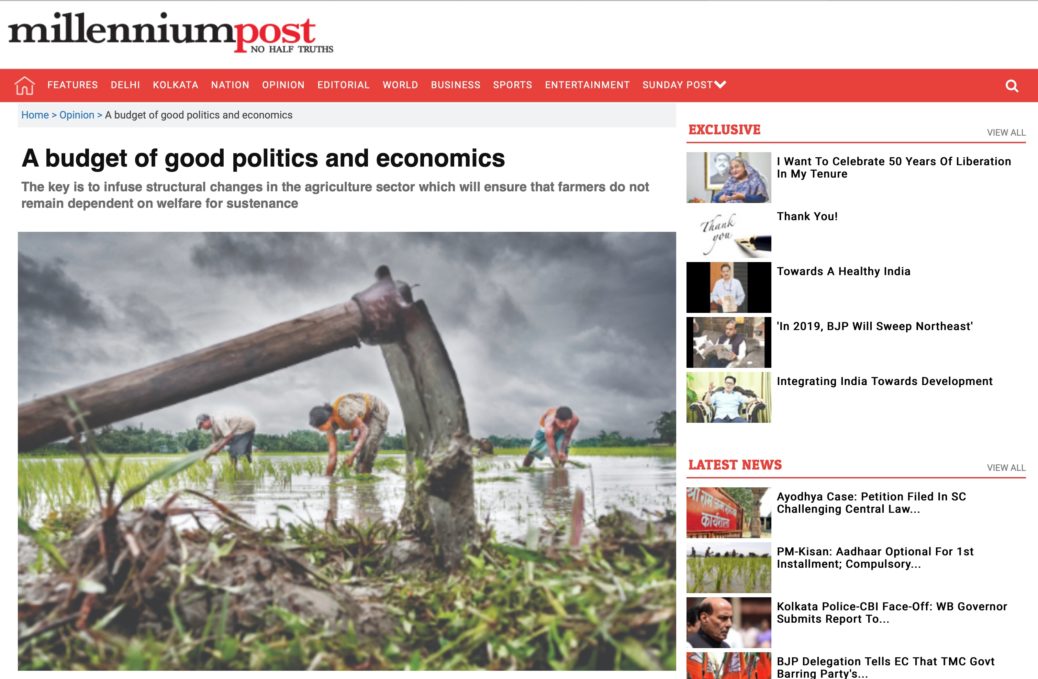 As was being expected, the interim Budget presented by Piyush Goyal was not a traditional vote-on-account by any means. Contrary to the election-year convention, a full Budget was introduced by the government to pacify the voters. And it was undoubtedly a successful effort. Howsoever the scales stood between the BJP and the opposition before Piyush Goyal began his Budget speech, they were tilted in favour of the former by the time he ended. The Budget has managed to appease a majority of the country through its populist leanings.

The two highlights of the Budget were the farm income support scheme doled out by the government and the announcement of the tax rebate for income earners below 5 lacs. The former was targeted at the farmers across the country who had been reeling under an agricultural crisis.

The disappointing performance of BJP in the rural areas in the recent state assembly elections had made it evident that the problem of farm distress was in urgent need of redressal. Real rural wages have hardly increased in the last few years despite the persistence of low inflation. This was in contrast to the promise of doubling farm incomes by 2022.

The Budget attempts to address this problem with an income transfer scheme for small farmers, Kisan Samman Nidhi. The scheme intends to transfer Rs 6000 a year to farmers that have less than 2 hectares of land. To put things in perspective, about 70 percent of agricultural households own less than 1 hectare of land. Over 120 million small farmers are likely to benefit from the scheme and it would cost the exchequer over 750 billion rupees per year.

In the run-up to the Budget, such ideas had increasingly gained currency. However, the government has been more conservative than most suggestions. Rahul Gandhi had made a pitch to the farmers where he promised Rs 1500 per month per household. The ex-Chief Economic Advisor, Arvind Subramanian, had also proposed a plan that involved a higher transfer of income and was wider in coverage.

The proposed scheme is also not sufficient by any standards as NSSO data shows that farm households with even the smallest size of land holdings has an expenditure of nearly Rs 6000 per month on an average. But, keeping fiscal constraints in mind, it seems to be a positive step forward to begin addressing the farm distress as it would partly cover the cost of inputs. The success of these schemes has been experienced in the states of Telangana and Odisha as discussed in this column last week.

There are, however, certain challenges that need to be highlighted. First, nearly 250 million out of a total of 850 million Indians that reside in rural areas are landless agricultural workers. The scheme leaves them out of its ambit when, in fact, they are the most vulnerable sections of the rural society. A second challenge lies in the process of identification and delivery. It will be an arduous pan-India effort to identify households that have land holdings less than 2 hectares and ensure that they are connected to the direct benefit transfer (DBT) network.

Finally, and most importantly, even though the scheme is a positive step to allay the agricultural crisis, it is not a long-term solution. The key would be to infuse structural changes in the sector that ensure that farmers do not remain dependent on welfare for sustenance. The productivity of Indian farmers needs to be enhanced as I’ve often argued through this column by strengthening the country’s food processing industry, for instance. Only if Indian farmers become competitive on the world stage can the perpetually ailing sector be extricated from itself.

Meanwhile, the second aspect of the Budget that generated waves was the announcement that tax payers with annual income up to five lakhs will get full tax rebate. The tax slabs were, however, left untouched. Nevertheless, over 30 million individuals will gain from the move. As a result, the purchasing power of these individuals will witness an unambiguous push upwards. Combined with the income transfer given to farmers, the demand conditions of the country will certainly improve in the process driving its competitiveness forward.

With a focus on the rural economy and middle-class Indians, the Budget has managed to be the perfect election-year Budget and has also aimed at driving consumption in the economy. However, two challenges remain. First, the capital expenditure of the government has stagnated and needs to be consistently increased to ensure long-term growth. Second, the fiscal health of the economy needs to be maintained. The government has yet again slipped on its fiscal target this year. The fiscal deficit of the economy stands at 3.4 percent as per revised estimates. It has been 11 years since the target of 3 percent was supposed to have been met. If India aims to be fiscally responsible, kicking the can further down the road is not the way to go. The Budget might have brought immediate cheers all around and rightly so, but the nation also needs to have the longer picture in mind. Anyhow at this moment we can say this is a budget that is good politics and economics all rolled in one.