Mr Jaitley, isn’t it time to get rid of personal income tax for the sake of better economy? 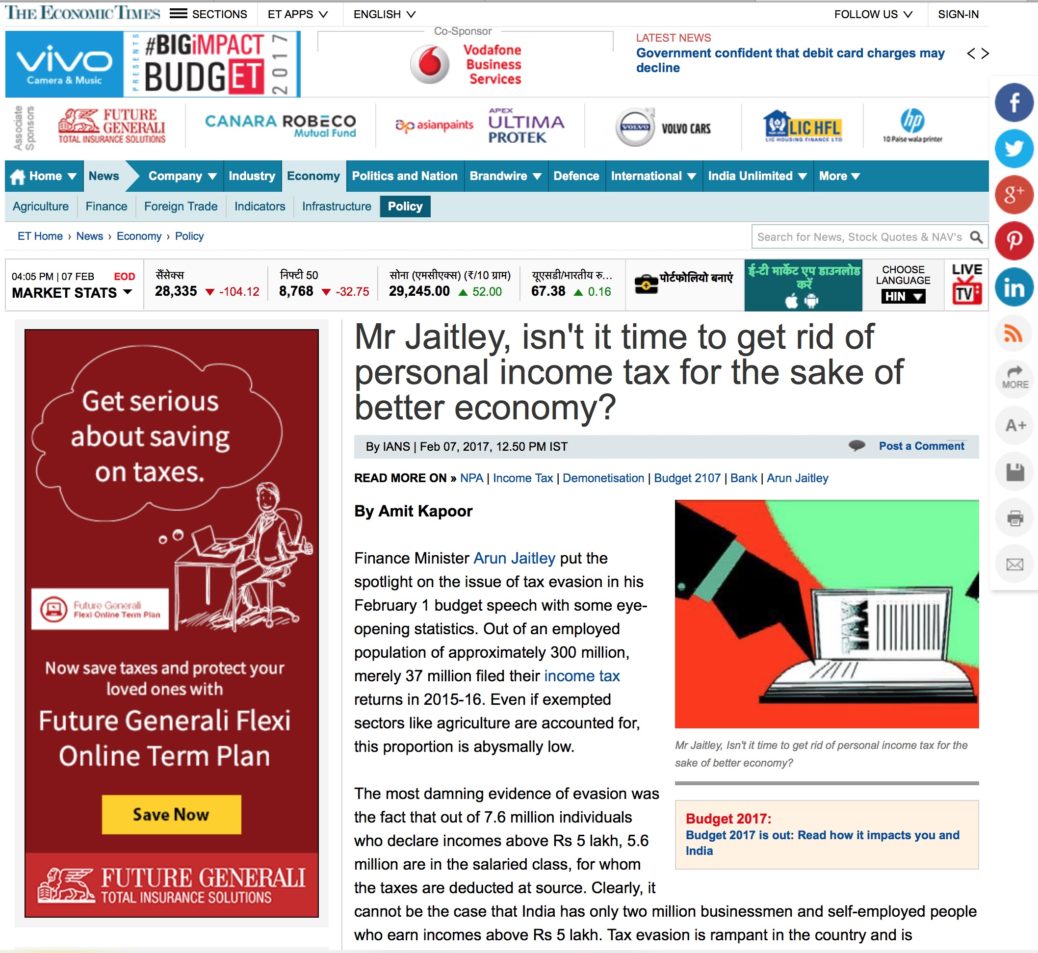 Finance Minister Arun Jaitley put the spotlight on the issue of tax evasion in his February 1 budget speech with some eye-opening statistics. Out of an employed population of approximately 300 million, merely 37 million filed their income tax returns in 2015-16. Even if exempted sectors like agriculture are accounted for, this proportion is abysmally low.

The most damning evidence of evasion was the fact that out of 7.6 million individuals who declare incomes above Rs 5 lakh, 5.6 million are in the salaried class, for whom the taxes are deducted at source. Clearly, it cannot be the case that India has only two million businessmen and self-employed people who earn incomes above Rs 5 lakh. Tax evasion is rampant in the country and is especially high among the non-salaried class.

The facts in the Budget underline the unjust nature of the imposition of income tax in the country. The honest taxpayer is simply discriminated against. This happens in two ways. First, in Jaitley’s own words, “When too many people evade taxes, the burden of their share falls on those who are honest and tax-compliant.” Second, the complicated filing procedures and undue harassment later impose an additional shoe-leather cost on the person paying taxes. These issues create incentive problems among taxpayers. It is in the payer’s best interest to find ways to avoid taxation.

The constitution’s promise to treat every citizen equally before the law fails to hold in the case of such unjust tax laws. When the constitution was formulated, nobody could foresee that such laws would always keep the honest taxpayer on edge. While filing returns, the person has to present pages after pages of evidence that carry his earnings, expenses and rebates to a hired accountant because the process is simply so arcane and complicated for a layman to handle.
The problems do not end after the process is complete. There are recurrent situations where years after an honest return, people are arbitrarily commanded to appear before an investigator to present evidence that has long been destroyed or misplaced. In the case of failure to do so, the said investigator declares that the taxpayer would be re-taxed on the said return. Generations of good citizens have been at the mercy of an army of tax collectors and auditors that presume a taxpayer guilty until he proves his innocence.

The discrimination against honest taxpayers has resulted in the ballooning problem of tax evasion that has led to India’s tax to GDP ratio being as low as 5.47 per cent in 2015-16. By comparison, China has a tax to GDP ratio of 9.7 per cent while the US ratio stands at 11 per cent.

Such a dismal state of affairs calls for radical change. The demonetisation drive might have helped the tax authorities get many people on their radar, but the inherent, flawed incentive mechanisms will encourage people to find ways to evade imposition of taxes in the future as well. Tax reforms need to eliminate all incentives to practise non-compliance.

An interesting proposition is to eliminate the imposition of income taxes altogether. There are numerous advantages from such a move. First, it will make a large proportion of black money white. This would bring the horde of funds stored in foreign banks back to the country and in circulation. Second, it would increase the disposable income of the honest taxpayers and boost consumption and investment of the country. Third, the savings rate would see a push as people deposit more money in banks to earn higher interest instead of storing it in cash or fixing it in gold.

This should boost private investment and mellow the non-performing assets (NPA) problem that the banks are currently facing. It would also reduce our gold import bill and strengthen the rupee. Finally, it would also improve efficiency in the economy. People wouldn’t need to spend unproductive hours with their accountants figuring out ways to evade taxes. Also, the bureaucratic process and the harassment that comes along with it would be eliminated. It would also reduce a source of corruption in the economy.
The biggest criticism of such a move would be the resulting loss of revenue. However, income tax is not a strong revenue-generating mechanism for the government as merely two per cent of Indians comply with it (compared to 53 per cent in the US). Also, a loss of over Rs 3 lakh crore that the move would entail can be easily replaced with much more efficient mechanisms. A banking transaction tax can be considered. A small tax on any banking transaction in an economy can vastly increase the government’s tax base and revenue compared to the current inefficient method.

There are various steps that can be taken to eliminate the inefficiencies that are inherent in the current system of taxation in India. Its incentive structure needs to be corrected and replaced with an innovative mechanism that is non-discriminatory and aligned with the country’s constitutional principles. It is high time we question the relevance of the personal income tax.

The article was published with Economic Times on February 7, 2017.

The article was published with The Quint on February 7, 2017.