Market investors need to avoid being driven by animal spirits 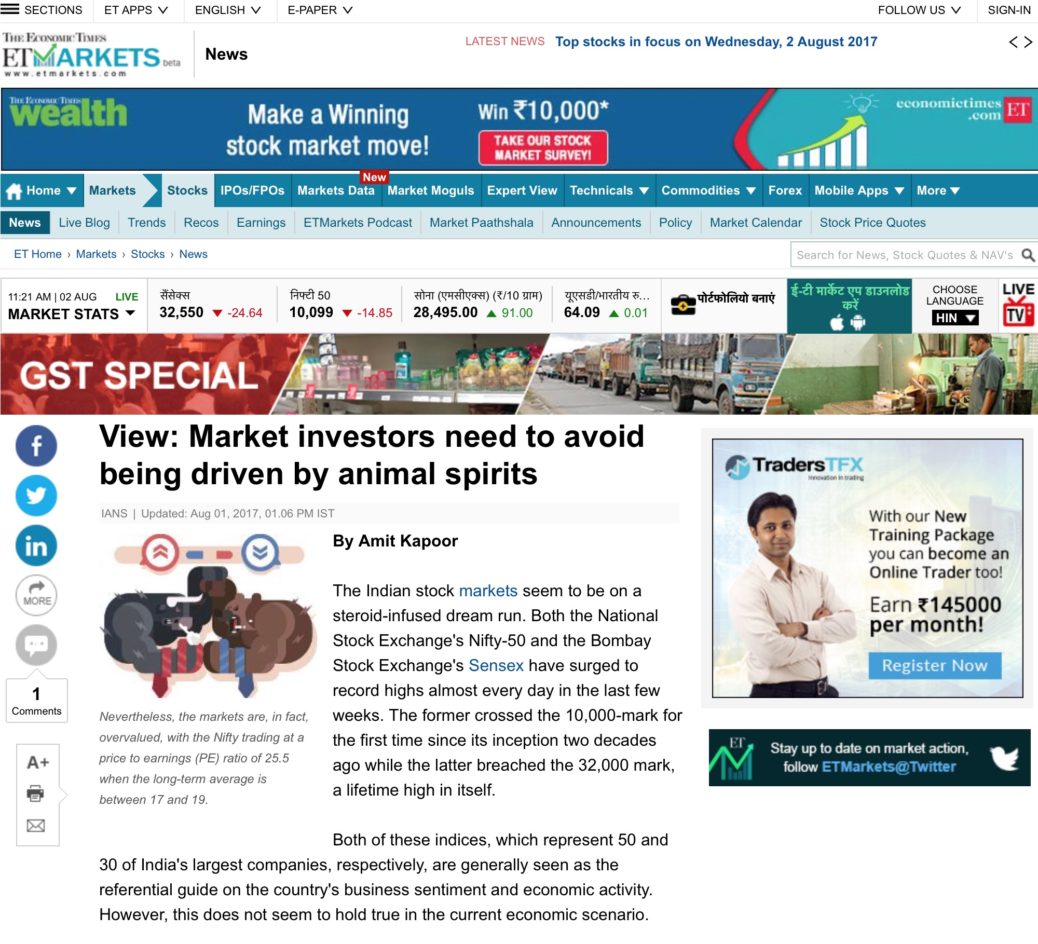 The Indian stock markets seems to be on a steroid-infused dream run. Both the National Stock Exchange’s Nifty-50 and the Bombay Stock Exchange’s Sensex have surged to new record highs almost every day in the last few weeks. The former crossed the 10000-mark for the first time since its inception two decades ago while the latter breached the 32000-mark, a lifetime high in itself. Both of these indices, which represent 50 and 30 of India’s largest companies respectively, are generally seen as the referential guide on the country’s business sentiment and economic activity. However, this does not seem to hold true in the current economic scenario.

The stock market is performing exceedingly well despite low investment activity across the country. The problem of rising non-performing assets in banks has been highly inimical to corporate lending and, thus, private investment. The lending situation has worsened to the extent that bank credit increased by merely 5.1 percent in the year ending March 2017, which has been the lowest since 1951. Likewise, fresh corporate investments during the same period have grown at their slowest pace since 1992. Just going by these factors, it can be said that business sentiment across the country has been at its worst in decades. Therefore, the recent stock market performance seems inexplicable.

The bull run of the stock market is, however, being driven by a few domestic and international reasons that are unrelated to real investments. First, as noted in my last week’s column, Indian households have been displaying a non-linear shift towards savings in financial assets post-demonetisation. Mutual funds have emerged as the preferred mode of investment. In fact, net inflows into mutual funds have witnessed an expansion of 155 percent, which is the highest in its history in India. These funds ultimately find their way into the stock markets. Retail investors and high net-worth individuals are also choosing to put their money in financial assets rather than holding cash.

Second, the market performance can also be seen as a positive response to the Goods and Services Tax (GST) that was implemented earlier this month. The GST has not impacted corporate earnings for the organised sector as they were paying taxes earlier anyway and the tax slabs have ensured that the tax rate would not vary much from their earlier levels. Moreover, the implementation of GST has unified the Indian states into a common market making it easier to transport goods across state borders and to do business in general.

Third, on the external front, global investors have regained their faith in the Indian growth story. Foreign direct investment has hit an all-time high of $60.1 billion in the last financial year. On the other hand, foreign portfolio investors (FPIs) have also recently become bullish on the Indian market. Net FPI inflow, which had been INR 48,411 crores in 2016-17, has already exceeded INR 1 lakh crore in the current financial year.

The faith imposed by foreign investors in the Indian economy has been due to its strong fundamentals and future growth prospects. Inflation has been consistently falling from a high of 12 percent in 2013 to as low as 2.18 percent in May 2017. Fiscal deficit has also narrowed to 3.5 percent of the GDP in 2016-17 from a high of 6.6 percent in 2009-10. Current account deficit has also been contained at 0.6 percent. This puts the country’s balance sheet in a comfortable zone. With a stable rupee and low oil prices, the situation cannot destabilise any time soon. All these factors have made India an attractive foreign destination compared to other emerging economies.

Nevertheless, the markets are, in fact, overvalued with the Nifty trading at a price to earnings (PE) ratio of 25.5 when the average long-term average between 17 to 19. The highest PE ratio that the Nifty has ever achieved is 28.5 in February 2000 during the dotcom bubble after which it went into a freefall for the rest of the year along with the stock market. Generally, a Nifty PE above 22 is considered overbought. The stocks will maintain their upward trend in the short run as RBI will expectedly reduce rates this week. A good monsoon will further boost investor sentiment. However, as only domestic and global liquidity is driving markets and not real investment, stock prices will keep running ahead of its fundamentals.  Valuations will get expensive and when earnings will not see commensurate growth, markets will consolidate at a lower level. Therefore, a correction is expected anytime soon. That could happen with any trigger on the global or domestic front ranging from an escalation of the Doklam standoff to an abrupt withdrawal of FPI funds.

Hopefully, before such a situation arises, investment activity will pick up as the NPA issue is gradually resolved and earnings will grow to support the market performance and reduce its fragility. Until then, going forward, investors need to remain cautious on stocks and avoid being driven by animal spirits.

The article was published with Economic Times on August 1, 2017. Aashi Yadav has contributed to the article who is an intern at Institute for Competitiveness, India