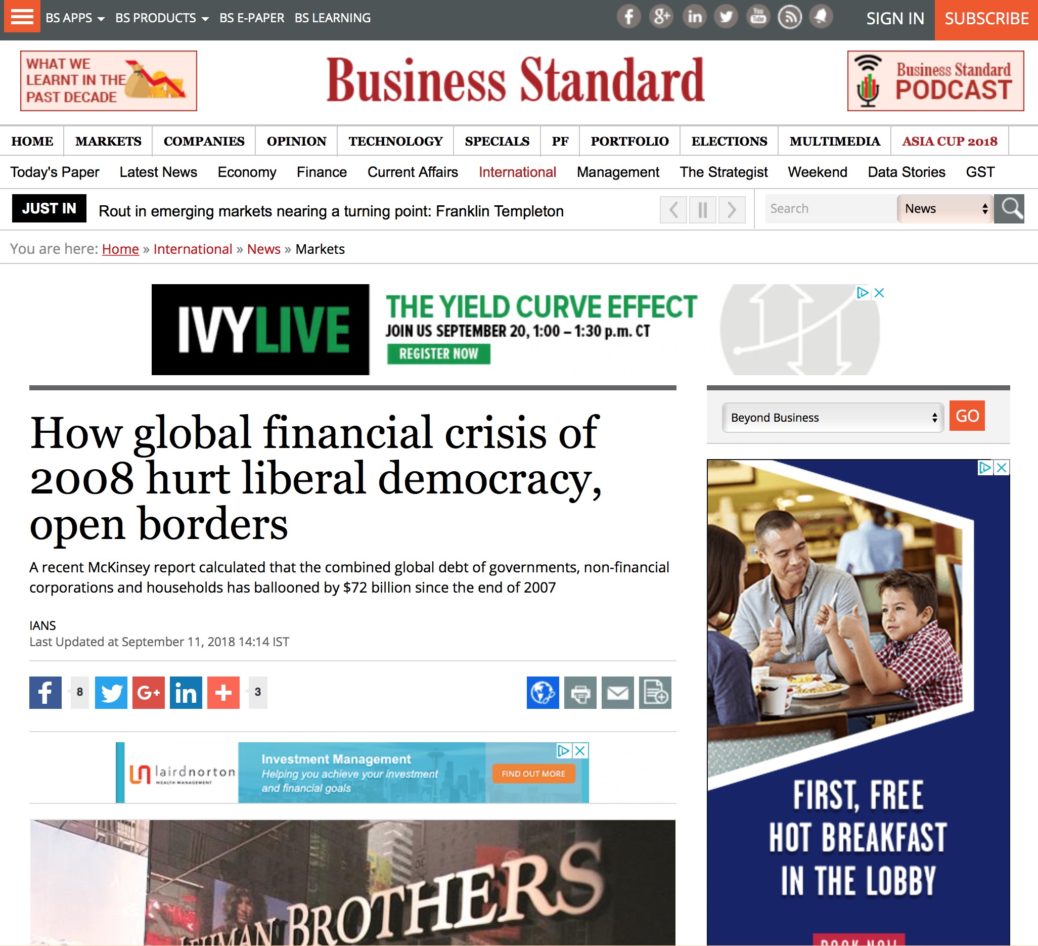 Exactly ten years ago on 15 September 2008, the dream run of the world economy came undone with the collapse of Lehman Brothers revealing a rotten scaffolding of financial skulduggery underneath it. Lehman’s failure had been the inevitable fallout of a systemic economy-wide pattern of irresponsible lending financed through issuance of exotic new financial instruments that had fuelled the American housing market for years. When the music finally stopped as property prices fell, and the loans and securities linked to the real estate market became worthless, all hell broke loose. The world’s worst economic crisis since 1929 ensued. The previous decade has been all about returning to the normalcy of the pre-Lehman days. There have, however, been little successes.

Debt, which had been the linchpin of the 2008 crisis, has continued to grow contrary to expectations mainly led by government borrowing across the world. A recent McKinsey report calculated that the combined global debt of governments, non-financial corporations and households has ballooned by $72 billion since the end of 2007. Quite interestingly, the Chinese economy accounts for more than a third of the global debt growth since the financial crisis. On a related note, as central banks around the world had kept interest rates low to encourage lending and boost growth, corporate debt levels have doubled since the crisis. This has been especially true for the developing world. As for the household sector, which was directly connected to the crisis, debt levels have fallen for the United States and Europe but has risen elsewhere.

The world economies did manage to stabilise the global financial system with such policies of burdening sovereign balance sheets, lowering interest rates, and widening fiscal deficits. But all of these moves only amounted to a weak recovery over the decade. This has been a failure of the field of economics more than anything else. The legacy of the global financial crisis could have been the re-thinking of the market economy. But little changed. A paltry of bankers were shown the door and a few institutions were levied with fines and penalties. Eventually, most of the burden was borne by the state or the shareholders.

To be fair, regulations were strengthened for banking institutions. They have to hold more capital and employ an army of compliance officers. Nevertheless, there has been no solution to the problem of too-big-to-fail institutions. Taxpayers will still have to bear the brunt of the next crisis. Just as before, profit is privatised but the risk is nationalised. The lack of unique policy recommendations from the economists has been deafening in the post-Lehman years. This has been in complete contrast to the previous major global crises.

While the post-war period saw a sustained period of robust growth on account of the successes of Keynesian economics, the post-1960s world shifted to a greater reliance on markets led by free-marketeers like Milton Friedman. The world failed to see any such shift in economic thinking after 2008. Policy-makers seem to be simply fidgeting to find the right balance between “free markets” and “government intervention”.

An unfortunate change that did occur after the crisis, however, has been the rise in populism around the world. In a world with widening income disparities where growth is skewed at the top while incomes stagnate or fall for the rest with no respite in sight, a toxic rhetoric that makes fanciful promises of reinstating past glory rings a bell with the voters even if more is usually said than done. In the process, more and more people have grown averse to the idea of laissez-faire and globalisation, especially in the advanced countries. Thus, liberal democracy and open international borders have been the biggest victims of the 2008 financial crisis.

Sooner or later the field of economics will have to rethink the way the world works. The status quo is an uncomfortable one. The current economic system has become highly rent-seeking behind the facade of free markets; a system that is highly rewarding for the politically connected insiders. The establishment’s complacency for change has built up rage among those who have been left behind in the process, which has materialised in elected leaders that have successfully managed to tap into this sense of unfairness. If the field of economics does not deliver soon as it did repeatedly in the twentieth century, a challenging future lies ahead for the world economy. Thomas Paine once wrote at the beginning of the American Revolution, “We have it in our power to begin the world over again.” Hopefully economists find the same conviction soon enough.

The article was published with Business Standard and Daily Hunt on September 11, 2018.