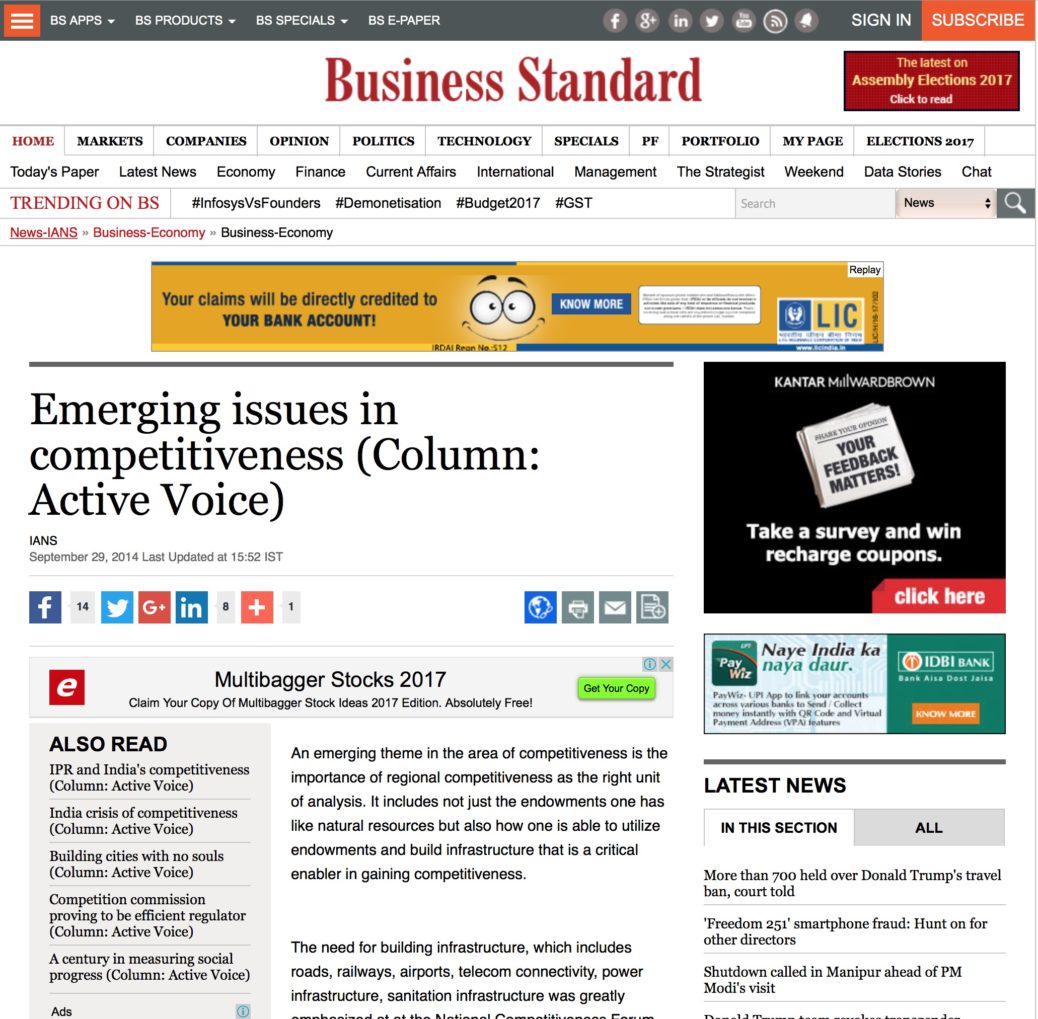 Recently we had the privilege of organizing the National Competitiveness Forum on September 26, 2014, where leaders from four continents had congregated to discuss issues pertaining to competitiveness and strategy. Some topics were conceptual and theoretical while others were analytical and practical. The broad contours of almost all aspects of competitiveness were touched upon, and solutions for India were looked at from various levels of geography as well as from diverse and often somewhat differing lenses and viewpoints. Almost all agreed to the fundamental premises that, competitiveness is about productivity with which a firm/ a geographical unit utilizes its resources to gain maximum output per unit of input.

An emerging theme in the area of competitiveness is the importance of regional competitiveness as the right unit of analysis. It includes not just the endowments one has like natural resources but also how one is able to utilize endowments and build infrastructure that is a critical enabler in gaining competitiveness.

The need for building infrastructure which includes roads, railways, airports, telecom connectivity, power infrastructure, sanitation infrastructure was greatly emphasized as well as the need to manage urbanization and to build more cities. This was in line with the smart cities initiative of the government of India. The fact that each unit of geography is important was put forth. This included the state, district and the city levels of economic geography that have the capability to make India truly competitive. Also challenges at various levels of geography were discussed, and the need to understand India from the perspective of cities/districts and states was put forward. It is in contrast to the viewpoint that India is a singular reality and the fact that one needs to understand the diversity, which fosters innovation, that in turn creates prosperity. The tolerance, which enables diversity, was also emphasized as a fundamental driver of competitiveness. Also stressed was the need to look at DAMB (Delhi, Ahmedabad, Mumbai, and Bangalore) i.e., City level and local Competitiveness rather than BRICS (Brazil, Russia, India, China and South Africa) i.e., National Competitiveness to understand growth and competitiveness.

Another theme, that came up, was technology adoption and and its ability to foster inclusion, innovation and competitiveness. The usage of technology for bettering the productivity was mentioned which could be across sectors namely agriculture, industry including manufacturing and services and functional domains within organizations. Technology also is disrupting the global value chains and having a great impact on the overall innovation ecosystem of firms as well as regions. Another critical aspect of technology adoption today is the end-user using technology in radically different ways to the one conceived by the maker of the product/service. Technology has the capability to fundamentally alter the ways of doing business and have a lasting impact on competitive advantage of a firm and in turn the competitiveness of a country.

Industrial development is another theme, which came up in the conference proceedings that was to an extent also accentuated by the PM’s ‘Make in India’ campaign started a day before the National Competitiveness Forum. The idea clearly was that India requires manufacturing capability to have a stronger economy.  The issues pertaining to manufacturing competitiveness were discussed and so were the land regulations and their impact on the competitiveness of Indian industry. Reasons as to why India fares so poorly on the ease of doing business and what could policymakers do to help remove bottlenecks was also looked at. Why India has been a laggard and has not been able to fast track industrial development that we see in countries like South Korea and Japan was mentioned as an area of concern.  It is something we need to learn from countries that have performed well over the past 20-30 years.

Institutions are the rules of the game that can bring about economic, societal and political change. The basic question for competitive economy is to look at how institutions particularly bureaucracy helps in creating an enabling environment for fostering economic growth and competitiveness. The need is to look for the ‘marginal man’, one who is dissenting and standing up to the bureaucratic system and nurture him in order to fundamentally change the way bureaucracy functions in the country. Also, there is a need to recalibrate institutions according to needs and requirements and with respect to time. The need is also to align institutions to serve the purpose they are meant to serve and not act to protect vested interests.  The protection of vested interests not only leads to economically sub-optimal outcomes but also undermines India’s democracy in a fundamental way. The basic question with respect to realigning the institutions has to start with the fact that whom are the institutions serving/ meant to serve. If there is a definite answer to that question most of what we see as wrong with institutions can be altered.

Tools and techniques were also discussed to assess, track and compare the competitiveness dimensions across countries including India. The deliberations focused on the need to visualize data and make it relevant to a policy context to enable policymakers as well as business to look at the national level comparisons for gaining deeper level insights into competitiveness of nations. At a different level of geography is the district level work that will bring to the fore crucial insights into how the country is performing and what needs to be taken into account while formulating policies for the district level in India.

The ideas discussed clearly helped build consensus on what competitiveness in general means and why is it important for India at this juncture. The discussions also clearly brought out the fact that if India needs to develop, its bureaucracy needs to deliver, the policy environment needs to be made stable and the rule of law needs to be upheld. With these significant insights, there is renewed hope to make India truly competitive in the 21st century. The years ahead must see the implementation of what is discussed in letter and in spirit.

Published in Business Standard on September 29, 2014.