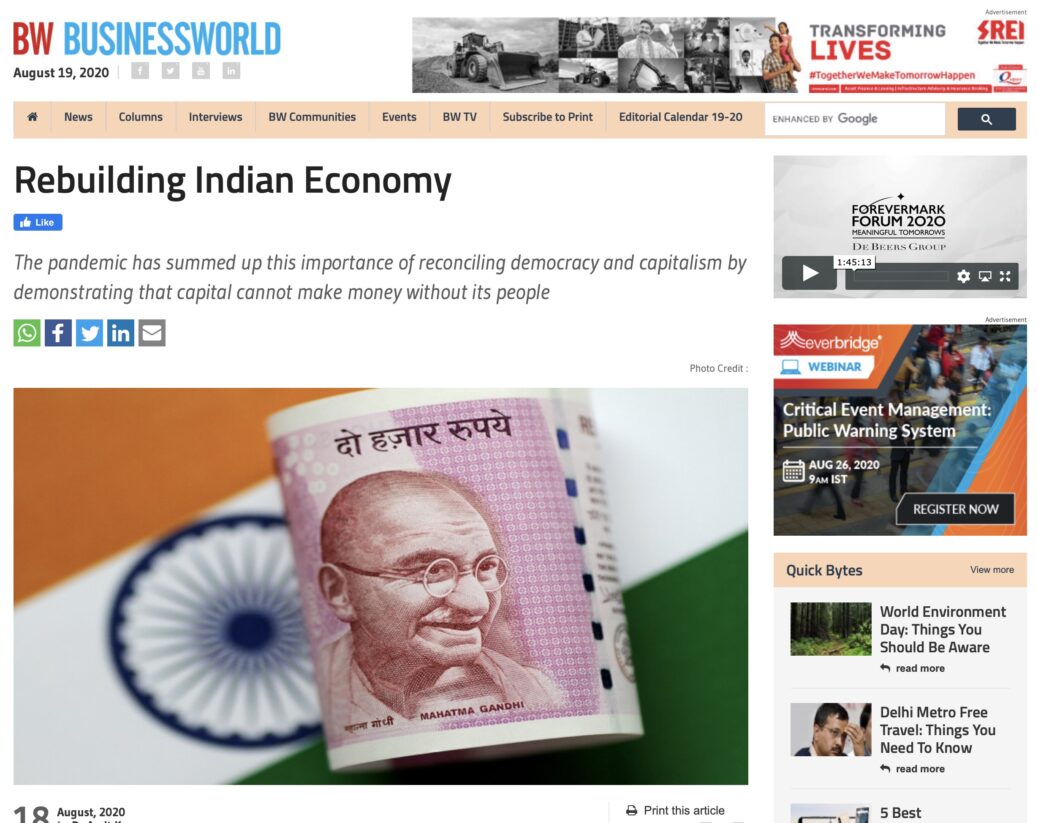 This year, Independence Day is a quiet affair and just another day of rising COVID-19 cases. While our economy struggles to stand back up, some of the economies have already begun on their recovery journey, including China.

China has been an old nemesis in terms of economic growth, and comparisons continue even though our neighbour has left us far behind to become the prime competitor to the world’s strongest economy, the United States. Indeed, both India and China began from the same starting point. We gained independence around the same time, faced massive economic downturns until both gradually began their upward growth journey. However, beneath the surface, both countries could not be more different than the other, which makes any comparison between them pointless.

The key difference that makes all the difference is that China is an authoritarian state, whereas India a democratic one. The policy response of different nations to the pandemic has shown that authoritarian states like China were more efficient in implementing their policies. The same goes with economic decisions, because there is lack of opposition or conflict.

In our eagerness to reach up to the success of China, we tend to forget that India’s challenges are different from China’s. We have chosen a political system that believes in equal rights for all, which translates into larger role for the people in governance and spreading the benefits of development more widely. Democracy may slow down processes and economic growth, but India has chosen to hold on to the values that do not begin and end with GDP. Moreover, economic growth has little significance if a section of the population is excluded from reaping its benefits.

Unlike China, India faces the challenge of juggling democratic values with economic growth. Hence, when we face a separate set of challenges, our growth journey cannot emulate China’s. By choosing democratic capitalism, we have signed up to the challenge of reconciling opposing forces of democracy that promotes equality and capitalism that creates inequalities.

Even though India has begun the endeavour to promote domestic markets and become more self-reliant, the challenges arising out of democratic capitalism could threaten free market. Markets require both market-creating and market-supporting institutions to enforce contracts and protect property rights. Institutions that are not strong enough to provide that assurance jeopardise competition and innovation, and consequently allow capitalist excesses to creep in.

As we begin rebuilding our economy, it is critical to remember that strong institutions can only exist in a democracy. It is democracy that keeps the pressure on institutions to function in a fair manner and therefore allows for equal opportunities in the market. It wouldn’t be wrong to say that free market would be a misnomer without democracy to ensures free entry and fair competition in the market. Thus, while democracy and capitalism often seem to be in conflict, they form the path for sustainable economic growth if melded together in right proportions.

If democratic ethos seep into the business community as well, it can inspire businesses to self-regulate, support their business ecosystems, ensure fair competition and look out for their communities. This can be a more sustainable and equitable way to shift to a market-driven economy.

The pandemic has summed up this importance of reconciling democracy and capitalism by demonstrating that capital cannot make money without its people. Hence, this Independence Day, let’s begin to rebuild our economy by keeping in sight the democratic values that served as the foundation for the Indian state and not leave people behind in our growth journey.

The article was published with Business World on August 18, 2020.