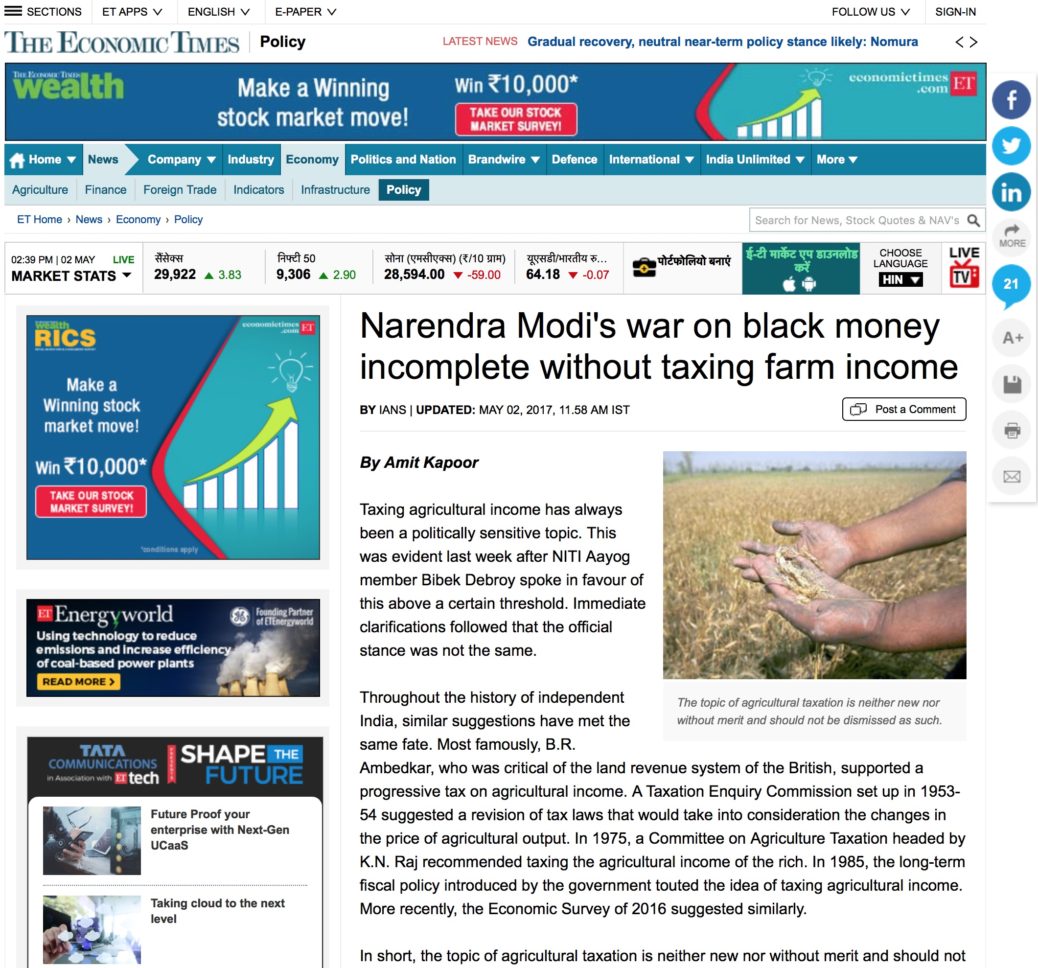 Taxing agricultural income has always been a politically sensitive topic. This was evident last week after NITI Aayog member Bibek Debroy spoke in favour of this above a certain threshold. Immediate clarifications followed that the official stance was not the same.

Throughout the history of independent India, similar suggestions have met the same fate. Most famously, B.R. Ambedkar, who was critical of the land revenue system of the British, supported a progressive tax on agricultural income. A Taxation Enquiry Commission set up in 1953-54 suggested a revision of tax laws that would take into consideration the changes in the price of agricultural output. In 1975, a Committee on Agriculture Taxation headed by K.N. Raj recommended taxing the agricultural income. More recently, the Economic Survey of 2016 suggested similarly.

In short, the topic of agricultural taxation is neither new nor without merit and should not be dismissed as such. The first argument in favour of such a taxation is that an exemption in the sector allows non-agricultural entities to evade taxes by declaring agriculture as their source of income. This undermines any effort to curb the circulation of black money in the economy. Post-demonetisation, a Parliamentary panel raised concerns that there was a rise in the number of cases with farm income higher than Rs 1 crore. The Modi government’s fight against black money will be rendered incomplete if the agricultural sector is not brought within its ambit.

Secondly, it hardly makes sense to keep big farmers and agricultural companies out of purview of the tax department. Companies like Kaveri Seeds and multinational Monsanto India claimed exemption of Rs 186 crore and Rs 94 crore as agricultural income in the year 2014-15. Surely such companies and farmers owning land above a certain threshold can be brought under the tax net.

Third, the scale of tax exemption in the sector is such that the government will have to consider levying income tax on them. Bibek Debroy pointed out that two-thirds of India’s 225 million households are in rural India and are effectively not taxed. Moreover, India has 110-120 million cultivators and a tax payer base of 64.4 million. It is both unfair and inefficient to impose the burden of taxation on such a small proportion of the country’s population.

Fourth, a uniform taxation of agricultural income across the country will eliminate the competitive disadvantage farmers of some states face due to taxes imposed by their state governments. For instance, plantations in Kerala are taxed at 50 per cent, while farmers in neighbouring Tamil Nadu pay no taxes. Such a scenario hurts farming activities in the taxed state and leaves little scope for agricultural growth.
Finally, agriculture acts as a depressant on the tax to GDP ratio of any country due to exemptions. Indira Rajaraman estimated in a cross-country analysis of developing countries that a one per cent increase in the share of agriculture in GDP reduced tax revenues as a percentage of GDP by a little over a third of a percent. For a developed country, where the share of agriculture in GDP is quite small, non-taxation of agriculture becomes a minor concern. But, for a country like India, where agriculture still accounts for about 18 percent of the GDP, the loss in tax revenue is significant

A major problem that arises out of any move towards agricultural taxation is that of the process. An agricultural income tax above a certain limit based on self-declaration of income will be difficult to verify due to the prevalence of cash transactions and absence of any standard book-keeping. The few states that have tried taxing agricultural income since independence have witnessed a natural evolution of taxation towards plantation crops. This is mainly because plantation agriculture is the only form of agricultural activity that has large-scale operations, formal records of accounts, and connection to the banking system

But devolving taxation powers to local levels can be an effective mechanism of taxing agricultural income. First, local governments will have a greater sense of the ground reality of agricultural practices. It will be difficult to conceal farm earnings from a local tax authority than when the state government is in charge of tax collection. Second, when the tax payers have assurance that their money will be used for local development, or more preferably reinvested in improving the local agriculture sector, they will be more compliant.

In order to ensure higher compliance, expenses on inputs can also be made deductible from income and depreciation subject to rebates. This will also incentivise farmers to invest in inputs, thus boosting agricultural productivity. Taxation of agriculture isn’t as ghastly a proposition as it is portrayed. In fact, it can be a blessing in disguise for the tax authorities and for the agricultural sector itself.

More importantly, an income threshold will leave a majority of Indian farmers, who have small land holdings, unaffected. According to the Agricultural Census 2010-11, 95 per cent of Indian farmers have operational holdings below four hectares. The case for not taxing agricultural income is weak and only the fear of being perceived as “anti-farmer” has been holding political parties back. The key is to change the narrative around making such a move by highlighting its inherent benefits.

The article was published with Economic Times on May 2, 2017.