US Election and America’s Deep Divide 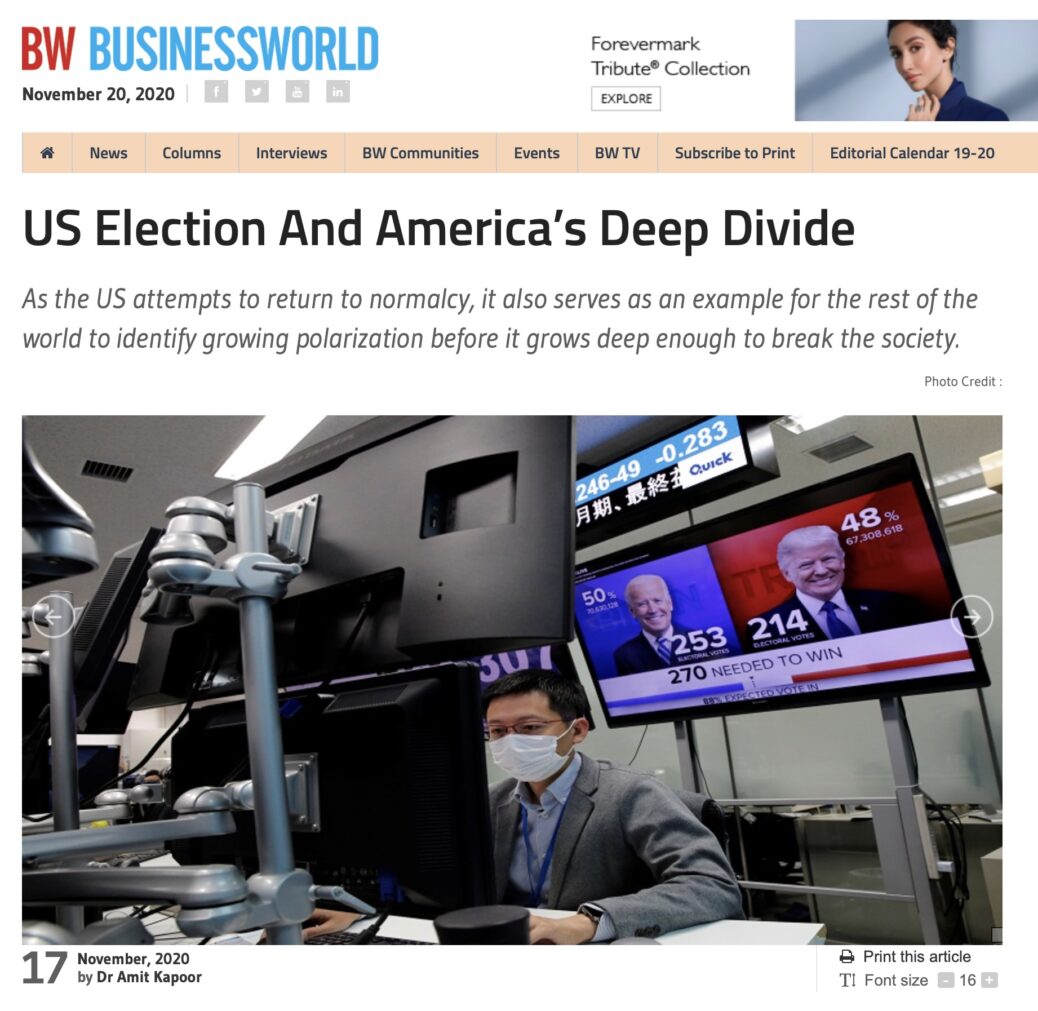 US Election and America’s Deep Divide

The high-stakes US election that concluded with the victory of Democrat candidate Joe Bidenyet again revealed the hyper-polarization within the United States. Donald Trump’s term in office was marked with unscientific policies, rise in racial tension and consistent discord with mainstream news media, which alone could have swayed a modern democracy towards the Opposition. However, the Presidential race turned out to be a close one. Even though Biden won 290 electoral votes, the popular votes count shows that close to half (47.5%) of American voters had chosen Trump.

While polarization had been growing gradually over the decades in the US, it became particularly apparent during the last Presidential election in 2016. In the following four years, the antipathy between Republicans and Democrats only grew more, and captured the attention of several studies and research.

The Pew Research Center recently published a study which revealed how Republicans and Democrats viewed their opponents negatively, and that some of their negative views have grown stronger since 2016. Other studies reveal that their hate towards their opponents have grown more than their loyalty towards their own party. The interlink between their partisan identity and social identity also creates further distance between both camps. Studies show that Republicans are usually composed of White Christians, whereas Democrats comprise ofnon-White and non-Christians in large numbers.

One cannot ignore the role of the outgoing government in fuelling this divide. Trump’s vow to build a wall at the US-Mexico border certainly alienated Mexican immigrants as well as Mexican-Americans, who gravitated towards Democrats. The socio-cultural divide has reinforced the partisan divide, and resulted in othering and dehumanization of their political opponents. This has pushed the frontiers of political discussions. Immigration, healthcare, abortion, same-sex marriage, government spending, and gun control are not mere policy discussions now, but one’s reflection of value system. A differing opinion on either of these issues could be a deal-breaker in personal relationships. The result is a fractured society.

The COVID-19 pandemic drove another wedge between the two groups. The whole world witnessed how Republican and Democrats could not even agree on basic facts. Preventing the fast spreading virus required citizens to follow social distancing norms, which in turn required cooperation and mutual trust. However, America was yet to collectively agree on the existence of the virus, and the opinions were again divided over partisan lines.

Republicans’ steady loyalty towards the President even as he upped the ante each time -whether by downplaying the pandemic or dubbing it as “Chinese virus”- reveals how peopleuse partisan cues to form their opinions on any subject from foreign policy to scientific facts. The social media and partisan media have also contributed to shielding people from accessing alternate viewpoints and opinions that could even slightly unsettle them. The phenomenon extends to other democracies around the world to an extent too.

Joe Biden’s very first speech as President-elect appealing to Americans to stop treating each other as enemies indicates the severity of the problem, but also a step in the right direction. It is a reminder for other democracies to not let national identity be overshadowed by partisan identity. It is also a reminder that politics should not be so binary that it leaves little room for dialogue and compromise. Politics does involve contestation and conflict, but not at the expense of national unity. As the US attempts to return to normalcy, it also serves as an example for the rest of the world to identify growing polarization before it grows deep enough to break the society.

The article was published with Business World on November 17, 2020.