Implications of the Rising Rupee 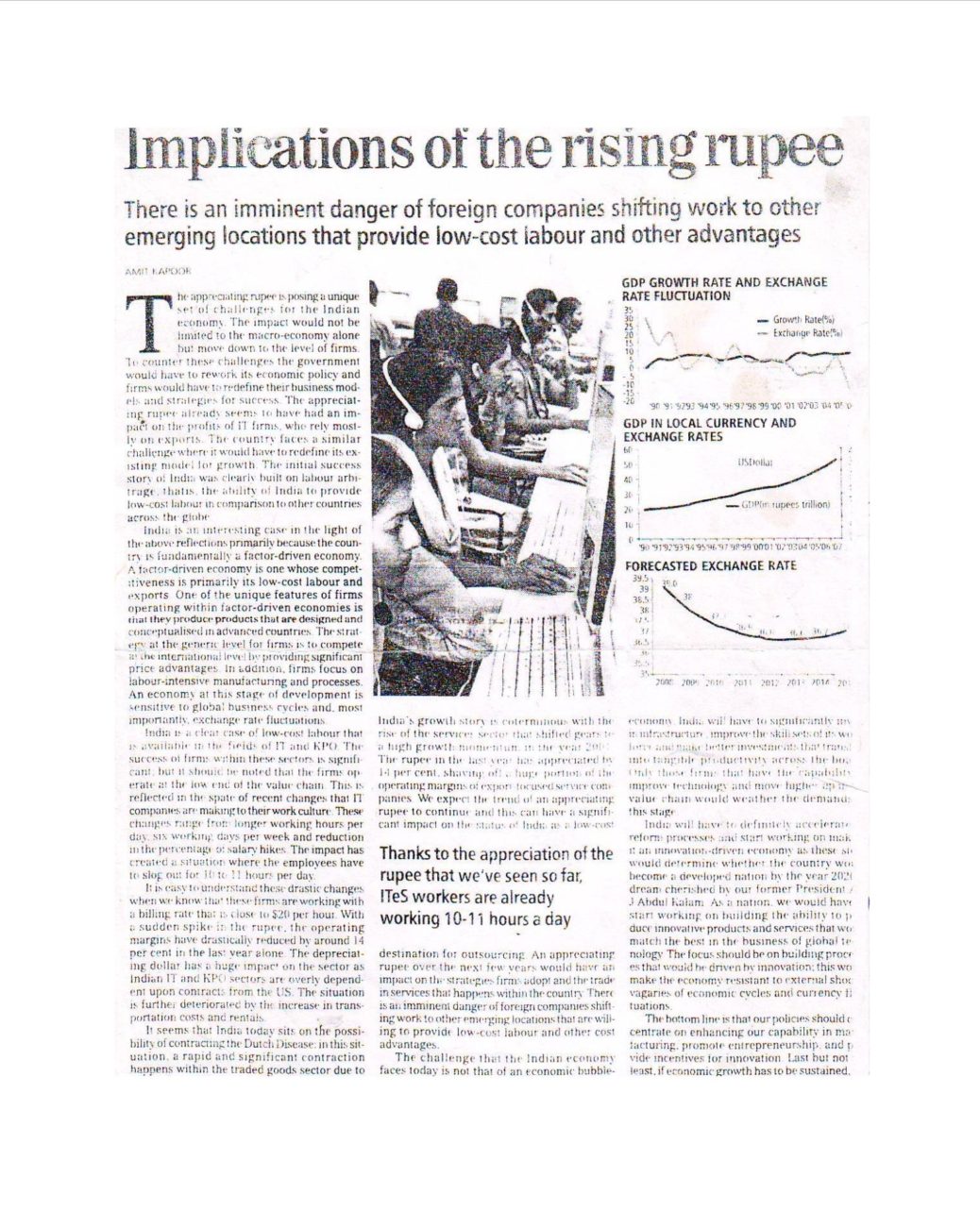 The appreciating rupee is posing a unique set of challenges for the Indian economy. The impact would not be limited to the macro-economy alone but move down to the level of firms. To counter these challenges the government would have to rework its economic policy and firms would have to redefine their business models and strategies for success. The appreciating rupee already seems to have had an impact on the profits of IT firms, who rely mostly on exports. The country faces a similar challenge where it would have to redefine its existing model for growth. The initial success story of India was clearly built on labour arbitrage, thatis, the ability of India to provide low-cost labour in comparison to other countries across the globe.

India is an interesting case in the light of the above reflections primarily because the country is fundamentally a factor-driven economy. A factor-driven economy is one whose competitiveness is primarily its low-cost labour and exports. One of the unique features of firms operating within factor-driven economies is that they produce products that are designed and conceptualised in advanced countries. The strategy at the generic level for firms is to compete at the international level by providing significant price advantages. In addition, firms focus on labour-intensive manufacturing and processes. An economy at this stage of development is sensitive to global business cycles and, most importantly, exchange rate fluctuations.

India is a clear case of low-cost labour that is available in the fields of IT and KPO. The success of firms within these sectors is significant; but it should be noted that the firms operate at the low end of the value chain. This is reflected in the spate of recent changes that IT companies are making to their work culture. These changes range from longer working hours per day, six working days per week and reduction in the percentage of salary hikes. The impact has created a situation where the employees have to slog out for 10 to 11 hours per day.

It is easy to understand these drastic changes when we know that these firms are working with a billing rate that is close to $20 per hour. With a sudden spike in the rupee, the operating margins have drastically reduced by around 14 per cent in the last year alone. The depreciating dollar has a huge impact on the sector as Indian IT and KPO sectors are overly dependent upon contracts from the US. The situation is further deteriorated by the increase in transportation costs and rentals.

It seems that India today sits on the possibility of contracting the Dutch Disease: in this situation, a rapid and significant contraction happens within the traded goods sector due to the real appreciation of the currency. It is also a situation where there is a large inflow of foreign currency along with sharp spikes in the prices of natural resources. In the Indian context, the natural resource is primarily cheap labour that is readily available and the traded goods are the deliverables of the IT and KPO companies. India’s growth story is coterminous with the rise of the services sector that shifted gears to a high growth momentum in the year 2001. The rupee in the last year has appreciated by 14 per cent, shaving off a huge portion of the operating margins of export-focused service companies. We expect the trend of an appreciating rupee to continue and this can have a significant impact on the status of India as a low-cost destination for outsourcing. An appreciating rupee over the next few years would have an impact on the strategies firms adopt and the trade in services that happens within the country. There is an imminent danger of foreign companies shifting work to other emerging locations that are willing to provide low-cost labour and other cost advantages.

The challenge that the Indian economy faces today is not that of an economic bubble-burst but is primarily about moving on to the next growth trajectory and economic development. Going by the model proposed by Porter, India has to embark on a journey that would move the country to an investment-driven stage and sow the seeds for catapulting India to an innovation-driven economy. To become an investment-driven economy, India will have to significantly invest in infrastructure, improve the skill sets of its workforce and make better investments that translate into tangible productivity across the board. Only those firms that have the capability to improve technology and move higher up in the value chain would weather the demands of this stage.

India will have to definitely accelerate its reform processes and start working on making it an innovation-driven economy as these steps would determine whether the country would become a developed nation by the year 2020, a dream cherished by our former President A P J Abdul Kalam. As a nation, we would have to start working on building the ability to produce innovative products and services that would match the best in the business of global technology. The focus should be on building processes that would be driven by innovation; this would make the economy resistant to external shocks, vagaries of economic cycles and currency fluctuations.

The bottom line is that our policies should concentrate on enhancing our capability in manufacturing, promote entrepreneurship, and provide incentives for innovation. Last but not the least, if economic growth has to be sustained, the authorities should facilitate infrastructural expansions.

The Article was published with  Business Standard on August 12, 2007.