The report released by the Institute for Competitiveness, India seeks to analyze the impact of Reliance Jio’s entry on the Indian economy.

Highlights of the report:

Since Jio’s entry into the Indian telecom markets on September 2016, the face of the industry has not remained the same. It changed the basis of competition by offering free lifetime calling to its consumers in an industry that derived 75 percent of its revenue from voice. Instead, data became the new focal point of competition. Within six months of Jio’s launch, India became the highest mobile data user in the world consuming over 1 billion GB of data every month as compared to 200 million GB earlier. The most recent estimates of the Jio network show that its users on an average consume almost 10 GB of data, 700 minutes of voice and 134 hours of video every month. Such levels of digital consumption were unprecedented a year and a half ago.

Increased accessibility and affordability of data

In the year since it launched, Jio has acquired over 100 million users — many connecting to the mobile internet for the first time in their lives. To give some context, this effectively makes Jio that fastest adopted technology in human history.

The first and the most obvious one has been that it has made data accessible and affordable for every user in the country. Average prices per GB of data have dropped from Rs 152 to Rs 10. Such a drastic reduction in data prices has not only brought the internet within the reach of larger proportion of the Indian population but has also allowed newer segments of society to use and experience it for the first time. As per our calculations, even the most conservative estimate shows that due to Jio’s entry the annual financial savings to the consumers would be to the tune of Rs 60,000 crores.

Think of the hundreds of millions of Chinese internet users and how they changed the very nature of e-commerce, creating behemoths like Alibaba and Tencent, and have revolutionised finance by creating cheap digital payments far faster than any in the United States. Indians might well initiate the next series of transformations because of how this vast user base will use the internet.

Before Jio’s entry there were hardly many avenues where such high levels of data could be expended by a consumer. On the other hand, Jio offers its consumers a wide bouquet of digital applications that address a variety of consumer needs ranging from education, health, entertainment and banking. All of these services form a part of the digital platform through which Jio aims to address multiple socio-economic needs of its customers. This study aims to delve deeper into the company’s unique business model and highlight its societal impact. We do this at three levels: through the shared value perspective, the social progress angle and an econometric analysis.

[Reliance Jio] has succeeded in using the India Stack to enrol 108 million consumers in 170 days with a totally paperless, mobile-centric manner — in the process achieving customer acquisition costs of less than $1 (USD) per customer, compared with the prior industry standard of $25.

The process of digital disruption — whether led by government or not — creates numerous significant social challenges. Rather than seeking to slow that process to reduce those challenges, India has taken the opposite approach: to not only embrace but accelerate digital disruption, to ensure its full potential for economic and social inclusion is realized.

In order to quantify the economic impact of Jio’s entry into the Indian telecom market, an econometric analysis was conducted to measure the impact of internet penetration on economic growth. The model used data for 18 states for the decade 2004-14 and showed that a 10 percent increase in internet penetration leads to an increase in GDP per capita by 3.9 percent, if all remains constant. Using the findings, the study found that through network effects, Jio’s entry into the telecom industry will expand India’s per capita GDP by about 5.65 percent, if all else is kept constant in the economy. 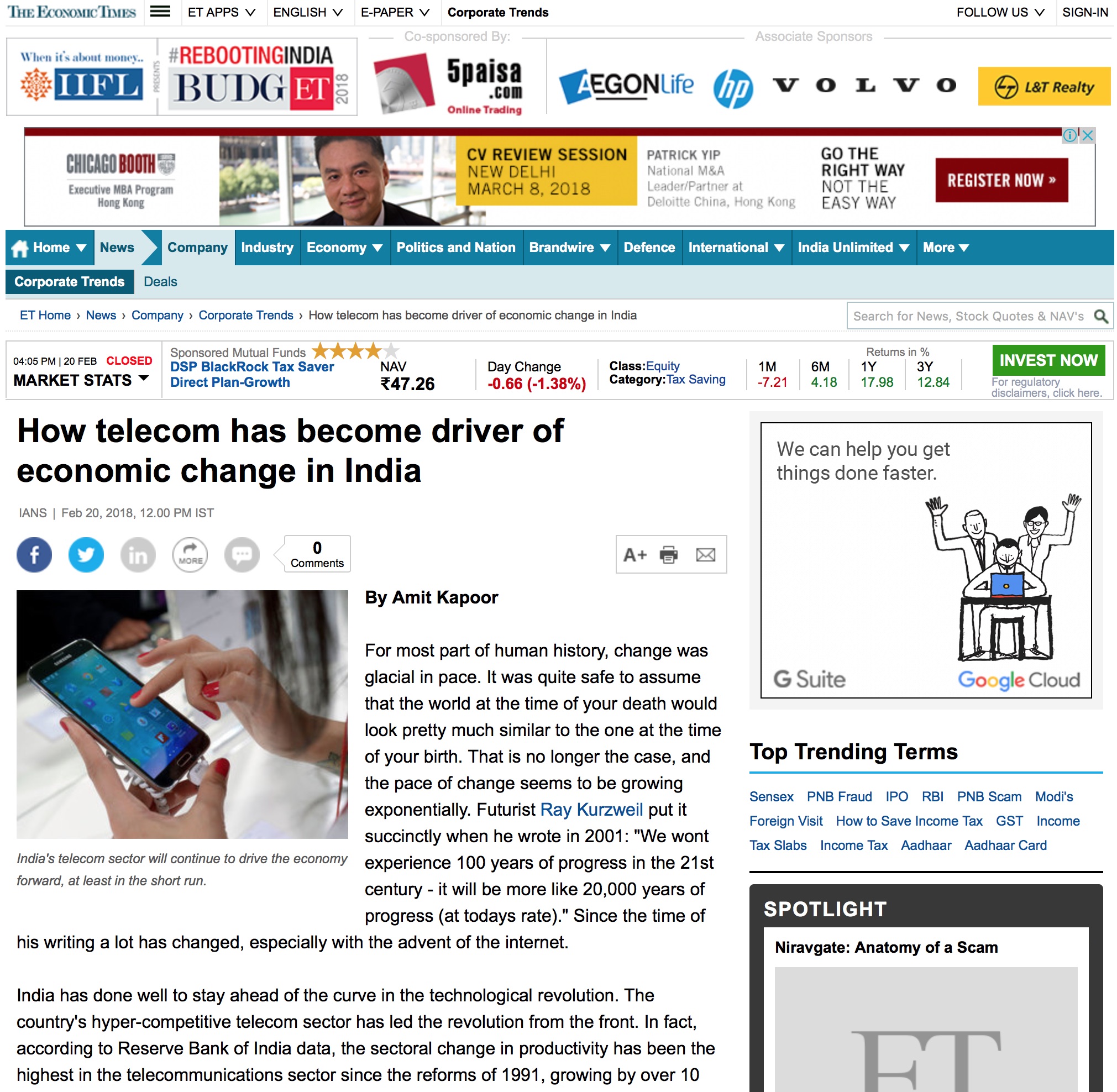 How telecom has become driver of economic change in India  For most part of human history, change was glacial... 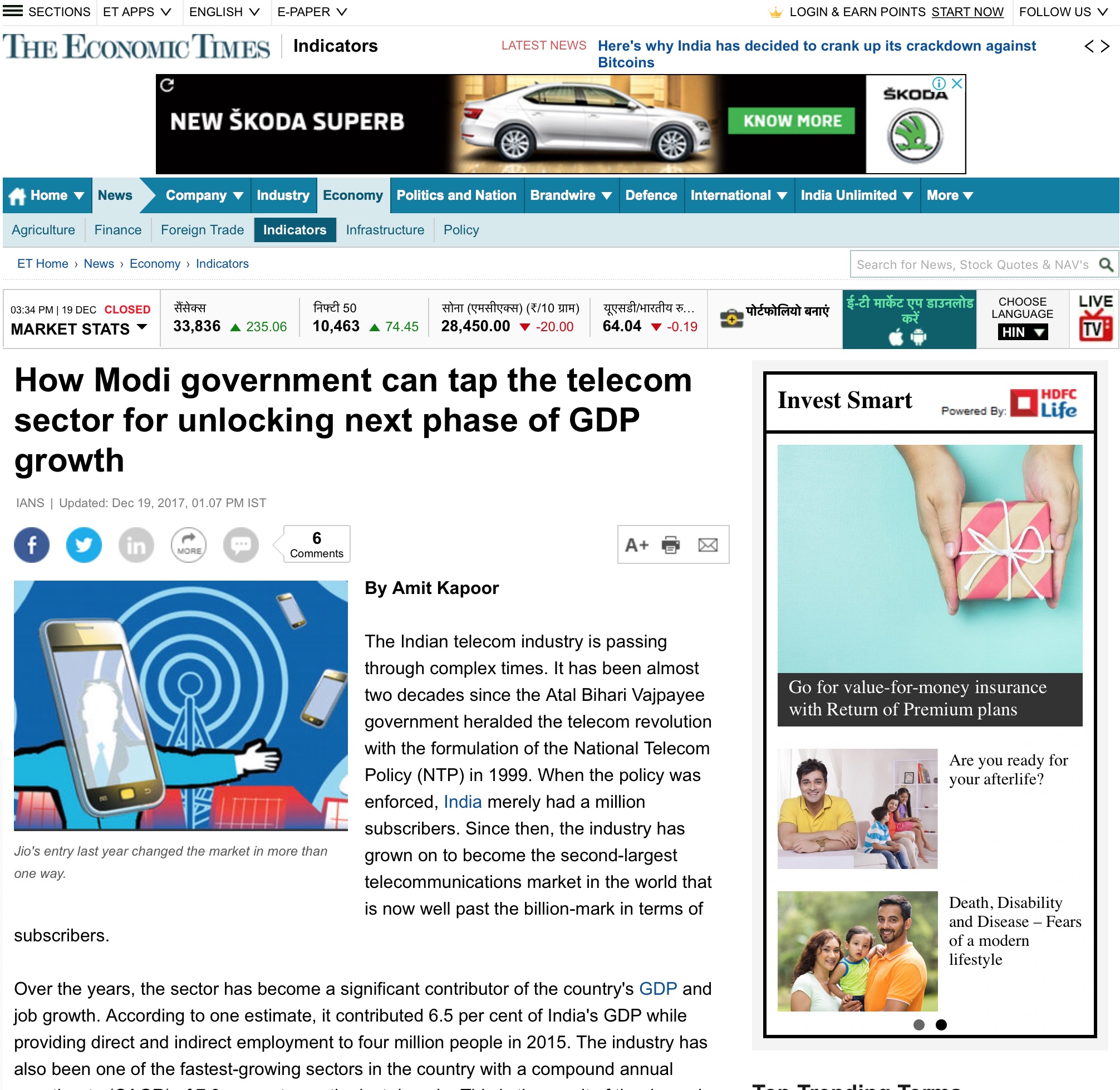 Tapping Into the Evolving Telecom Sector The Indian telecom industry is passing through complex times. It has been almost two decades since the Atal... 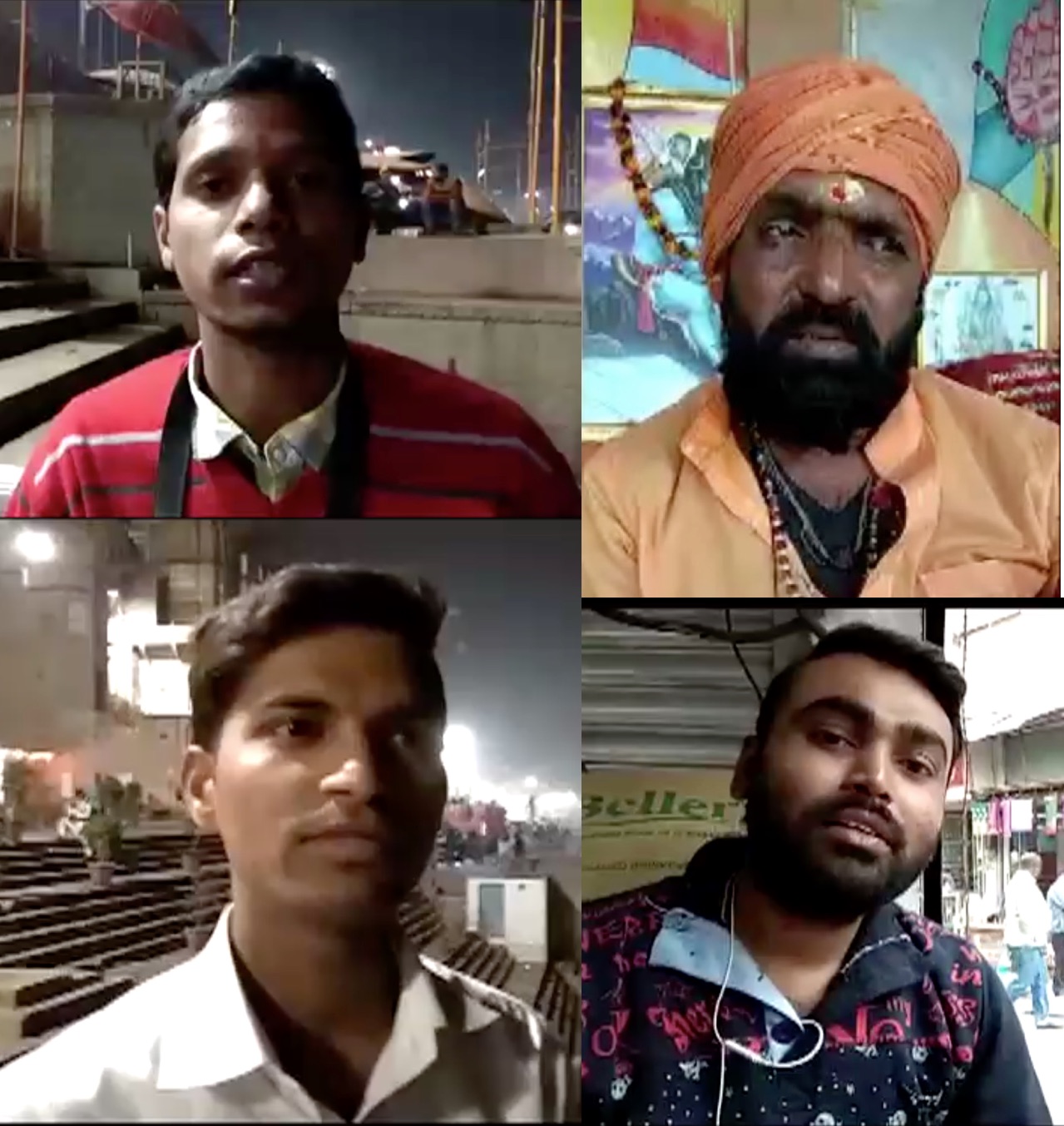 The videos showcases the experiences of people living in Varanasi who have started using Jio. Shubham Singh, Sunil Bharatiya, Rakesh...