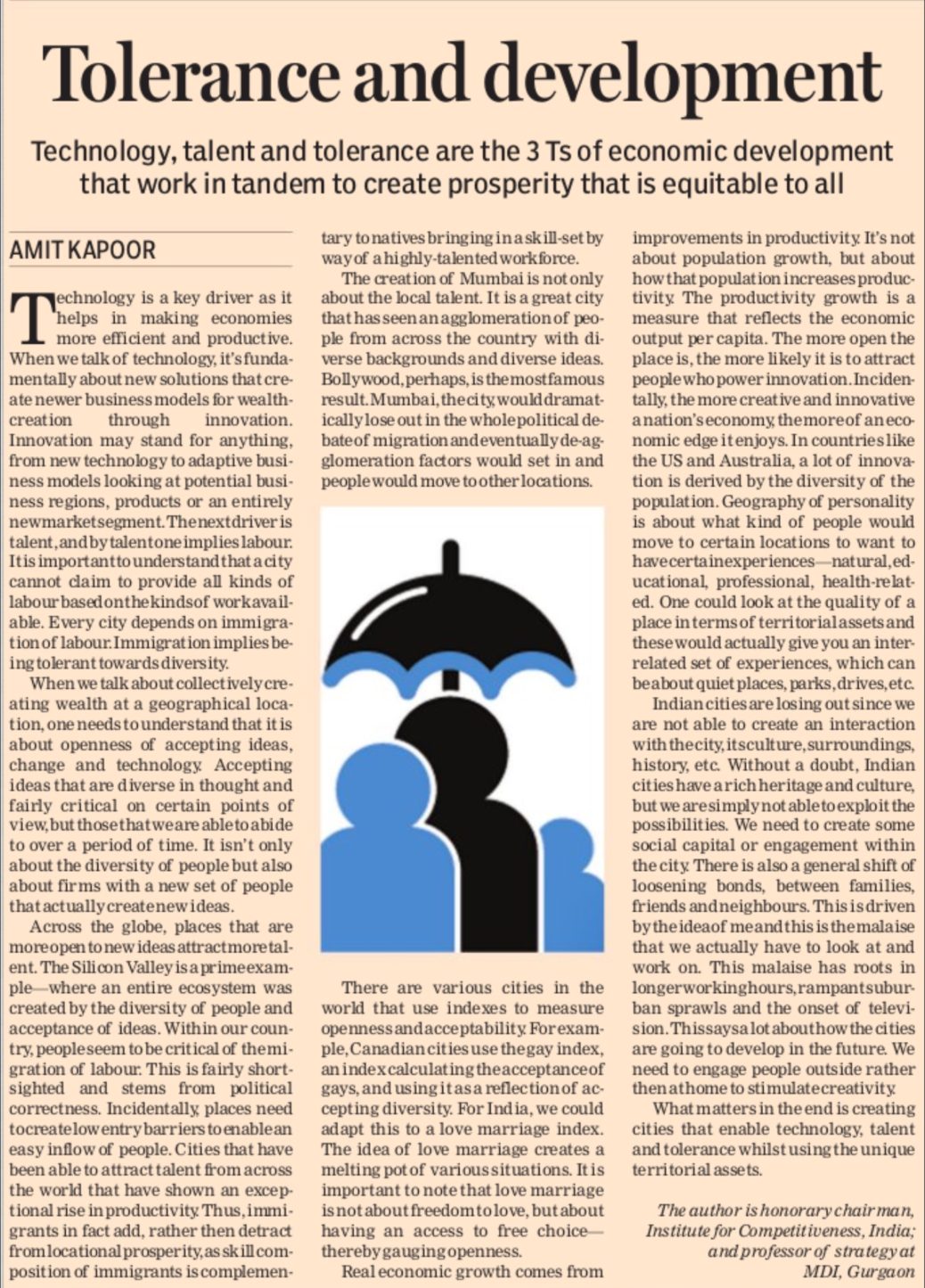 Technology, talent and tolerance are the 3 Ts of economic development that work in tandem to create prosperity that is equitable to all

Technology is a key driver as it helps in making economies more efficient and productive. When we talk of technology, its fundamentally about new solutions that create newer business models for wealth-creation through innovation. Innovation may stand for anything, from new technology to adaptive business models looking at potential business regions, products or an entirely new market segment. The next driver is talent, and by talent one implies labour. It is important to understand that a city cannot claim to provide all kinds of labour based on the kinds of work available. Every city depends on immigration of labour. Immigration implies being tolerant towards diversity.

When we talk about collectively creating wealth at a geographical location, one needs to understand that it is about openness of accepting ideas, change and technology. Accepting ideas that are diverse in thought and fairly critical on certain points of view, but those that we are able to abide to over a period of time. It isnt only about the diversity of people but also about firms with a new set of people that actually create new ideas.

Across the globe, places that are more open to new ideas attract more talent. The Silicon Valley is a prime examplewhere an entire ecosystem was created by the diversity of people and acceptance of ideas. Within our country, people seem to be critical of the migration of labour. This is fairly short-sighted and stems from political correctness. Incidentally, places need to create low entry barriers to enable an easy inflow of people. Cities that have been able to attract talent from across the world that have shown an exceptional rise in productivity. Thus, immigrants in fact add, rather then detract from locational prosperity, as skill composition of immigrants is complementary to natives bringing in a skill-set by way of a highly-talented workforce.

The creation of Mumbai is not only about the local talent. It is a great city that has seen an agglomeration of people from across the country with diverse backgrounds and diverse ideas. Bollywood, perhaps, is the most famous result. Mumbai, the city, would dramatically lose out in the whole political debate of migration and eventually de-agglomeration factors would set in and people would move to other locations.

There are various cities in the world that use indexes to measure openness and acceptability. For example, Canadian cities use the gay index, an index calculating the acceptance of gays, and using it as a reflection of accepting diversity. For India, we could adapt this to a love marriage index. The idea of love marriage creates a melting pot of various situations. It is important to note that love marriage is not about freedom to love, but about having an access to free choicethereby gauging openness.

Real economic growth comes from improvements in productivity. Its not about population growth, but about how that population increases productivity. The productivity growth is a measure that reflects the economic output per capita. The more open the place is, the more likely it is to attract people who power innovation. Incidentally, the more creative and innovative a nations economy, the more of an economic edge it enjoys. In countries like the US and Australia, a lot of innovation is derived by the diversity of the population. Geography of personality is about what kind of people would move to certain locations to want to have certain experiencesnatural, educational, professional, health-related. One could look at the quality of a place in terms of territorial assets and these would actually give you an inter-related set of experiences, which can be about quiet places, parks, drives, etc.

Indian cities are losing out since we are not able to create an interaction with the city, its culture, surroundings, history, etc. Without a doubt, Indian cities have a rich heritage and culture, but we are simply not able to exploit the possibilities. We need to create some social capital or engagement within the city. There is also a general shift of loosening bonds, between families, friends and neighbours. This is driven by the idea of me and this is the malaise that we actually have to look at and work on. This malaise has roots in longer working hours, rampant suburban sprawls and the onset of television. This says a lot about how the cities are going to develop in the future. We need to engage people outside rather then at home to stimulate creativity.

What matters in the end is creating cities that enable technology, talent and tolerance whilst using the unique territorial assets.

The article was published with Financial Express on January 2, 2013.