Reaffirming Faith in the Fight Against Climate Change﻿ 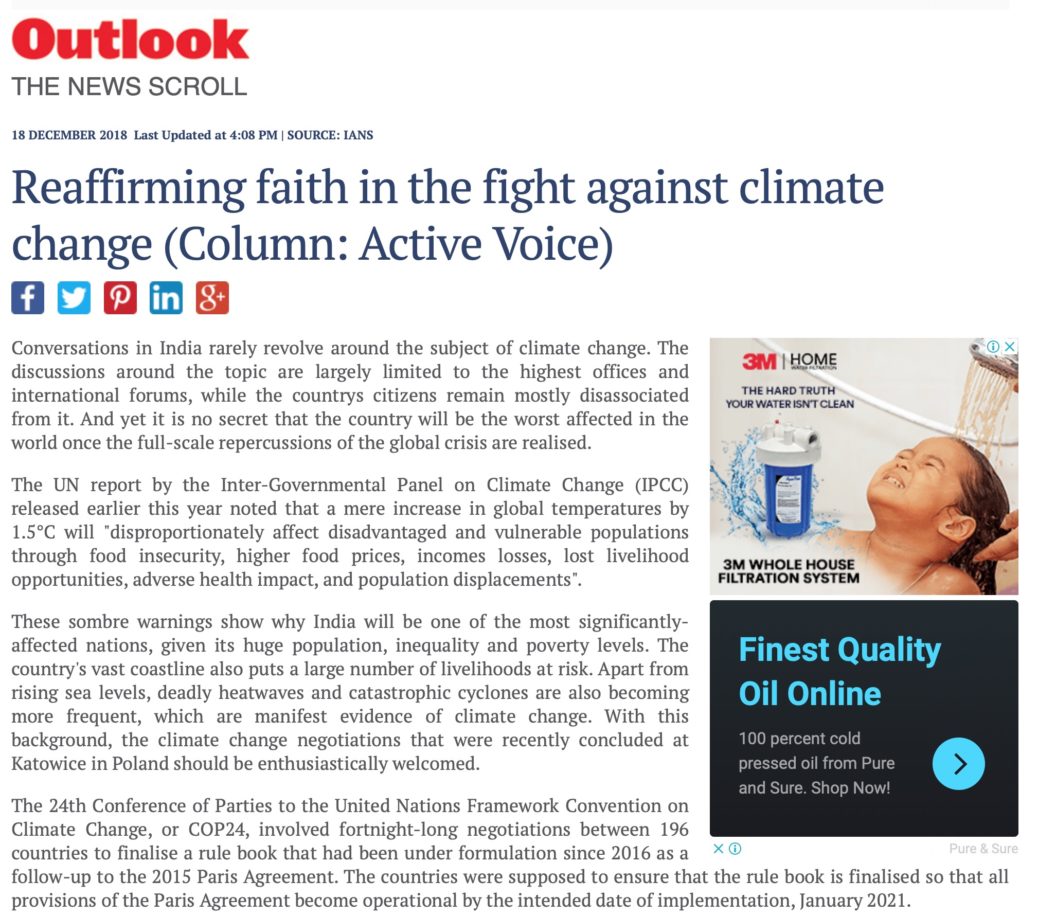 Reaffirming Faith in the Fight Against Climate Change

Conversations in India rarely revolve around the subject of climate change. The discussions around the topic are largely limited to the highest offices and international forums, while the country’s citizens remain mostly disassociated from it. And yet it is no secret that the country will be the worst affected in the world once the full-scale repercussions of the global crisis are realized. The UN report by the Inter-Governmental Panel on Climate Change (IPCC) released earlier this year noted that a mere increase in global temperatures by 1.5°C will “disproportionately affect disadvantaged and vulnerable populations through food insecurity, higher food prices, incomes losses, lost livelihood opportunities, adverse health impact, and population displacements.”

These sombre warnings show why India will be one of the most significantly affected nations, given its huge population, inequality and poverty levels. The country’s vast coastline also puts large number of livelihoods at risk. Apart from rising sea levels, deadly heatwaves and catastrophic cyclones are also becoming more frequent, which are manifest evidences of climate change. With this background, the climate change negotiations that were recently concluded at Katowice in Poland should be enthusiastically welcomed.

The 24th Conference of Parties to the United Nations Framework Convention on Climate Change, or COP24, in short, involved fortnight-long negotiations between 196 countries to finalise a rule book, which had been under formulation since 2016 as a follow-up to the 2015 Paris Agreement. The countries were supposed to ensure that the rule book is finalised so that all provisions of the Paris Agreement become operational by the intended date of implementation, January 2021.

The successful achievement of a compromise among the countries, firstly, comes as a relief. Since the announcement by President Trump in 2017 that the US would be withdrawing from the Paris Agreement, the very survival of the climate pact stood in jeopardy. Under the Paris Agreement, global cooperation was required on three fronts: first, the nations had to set carbon-reduction targets for themselves; second, the countries were to be held accountable for meeting these targets; and finally, the rich states were meant to subsidise the transition of developing nations to a carbon-free future. But, most of it was feared to be difficult to achieve with the withdrawal of US.

In fact, over the last few years the rising right-wing nationalism upset the global solidarity that was crucial to avoid an inevitable catastrophe. The US renegading on the deal has encouraged others to behave along similar lines. Saudi Arabia, for instance, played a key role in attempting to ensure that the summit does not “welcome” the IPCC report. Last month, even Brazil chose a climate-change denier as its foreign minister and the nation pulled out of hosting COP25.

In the face of such dangerous manifestations, the outcome of COP24 seems promising. The rule book ensures that from 2020 the fight against climate change will be driven by actions rather than promises. The agreement defines the responsibilities of each of the 195 signatory states for tackling climate change, report progress and intensify their efforts in the future. The very act of reaching an agreement shows that even if multilateralism has been desecrated in the last few years, it is not dead yet.

The negotiators at the summit believed that the rule book is a robust tool to combat the worst effects of climate change. But the reality is not as promising. Against the Paris Agreement’s long-term goal of limiting the increase in global average temperature to well below 2°C, the current pledges put the world on track for up to 4 degrees of warming. It might disappoint many that the summit could not urge governments to commit to more ambitious targets, especially after the findings of the IPCC report. All eyes will now be on the next deadline in 2020 when countries are expected to demonstrate that they have met their previous targets and set new tougher ones for themselves.

India, on its part, is on track to meet at least two of the three commitments it made in Paris. The country’s greenhouse gas emission intensity was to be reduced by 33-35 percent below 2005 levels by 2030. Second, 40 percent of its power capacity was to be based on non-fossil fuel sources. Third, India promised to create an additional ‘carbon sink’ of 2.5 to 3 billion tonnes through additional forest and tree cover by 2030. India is well on its way to achieve the first two targets.

It is heartening that most of the countries around the world are resolute in their commitment to the fight against climate change. Katowice has once again reaffirmed that belief. The world now has a solid road map for the actions it needs to take to carry on the fight. What is missing is strong leadership, the sense of unified urgency and scaled-up national ambitions. Hopefully, 2020 will change that. As Greta Thunberg, the 15-year-old Swedish activist said at the COP24 summit, “Until you start focussing on what needs to be done rather than what is politically possible, there is no hope.”

The article was published with Business Standard and Outlook India on December 18, 2018.