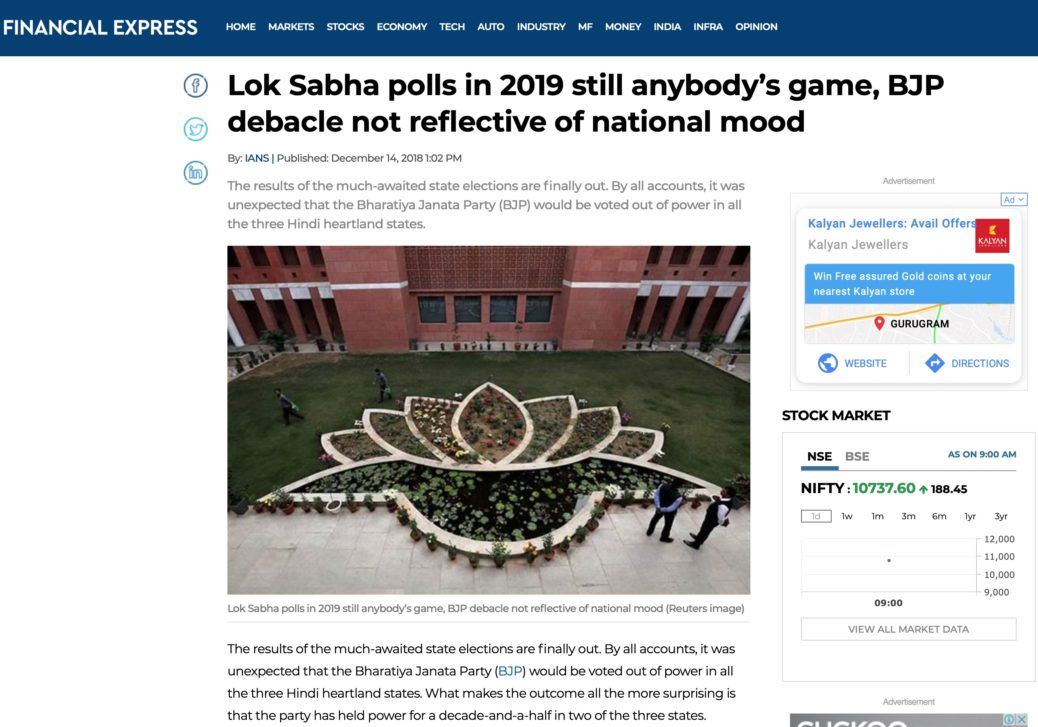 The results of the much-awaited state elections are finally out. By all accounts, it was unexpected that the Bharatiya Janata Party (BJP) would be voted out of power in all the three Hindi heartland states. What makes the outcome all the more surprising is that the party has held power for a decade-and-a-half in two of the three states.

The party’s performance makes two questions extremely pertinent. First, do the results serve as a good predictor of the 2019 general elections? And second, what can the BJP-led National Democratic Alliance (NDA) and the Congress-led United Progressive Alliance (UPA) take away from these results?

Past trends indicate that the results of assembly elections of some states are not reflective of the mood of the voters across the country for the subsequent general elections.

The extrapolation of sentiments from state assembly to general elections does not work for two reasons. First, in the latest state assembly election, 14.86 crore citizens went to vote across five states. Equating those voices with those of 85 crore voters across India fails to take into account the fact that the aspirations of voters across 543 constituencies differ quite significantly.

Second, different dynamics are at work during assembly and general elections. Regional issues play a key role in state elections. In the state elections of northern states, the rural section of the society usually plays a decisive role as their economies are vastly agrarian. In the recent elections, the spiking costs of fertilisers, clubbed with declining agricultural commodity prices worked against the incumbent party. On the other hand, in the general elections, issues apart from farm distress will also come into play to determine voter behaviour.

Another argument that is made to support such electoral extrapolations is that these results can at least serve as bellwethers for the parliamentary seats from these states and not for the entire country as such. However, there are important inferences that can be drawn about the public perception of the ruling and opposition parties from these results.

The wins of the Congress party have brought it back in the reckoning as a major force in national politics. However, given the 30-year-old trend of voting out the incumbent government in assembly elections in Rajasthan, the result should have been more decisive in Congress’s favour. In Madhya Pradesh as well, despite the anti-incumbency feeling against a 15-year-old BJP incumbent, along with other major issues such as farmers’ discontent, the Congress couldn’t significantly impact the BJP’s vote share.

In fact, the BJP has managed to garner a marginally higher vote share of 41 per cent than the Congress in Madhya Pradesh, which ended up with a vote share of 40.9 per cent. Clearly, the Congress party was unable to capitalise the anti-incumbency by providing an alternative narrative. For the ruling party, these results seem to be a wake-up call, but it would be wrong to claim that BJP has lost ground in the Hindi heartland as they have put up a strong fight in both Madhya Pradesh and Rajasthan.

The support garnered by BJP shows that people have not completely rejected the Hindutva ideology and politics. The lack of public decisiveness and higher turnout on both sides may lead to further polarisation and social conflicts in the short run.

The other lesson is that voting behaviour will be highly motivated by prominent social and economic issues: Farm distress in the rural areas, unemployment in urban areas, and corruption. The opposition needs to work towards providing an alternative development model that will solve the citizens’ issues and address the institutional challenges that exist in the Indian system.

One thing that can be concluded from the results is that 2019 is going to be an interesting contest. Before these results, despite demonetisation and implementation of GST, the popular sentiment was still seen with the BJP and it was able to sweep away state elections in major states like Uttar Pradesh and Gujarat. Now, the Congress party seems to be on the path to revival.

The 2019 elections will depend on how the two national parties position themselves politically and whether they are able to provide an alternative narrative to the voters.