India is only as ‘socially progressive’ as Yemen, Ghana, Nigeria, Pakistan and Congo! Ranks 101 of 133 countries in ‘Social Progress Index’ 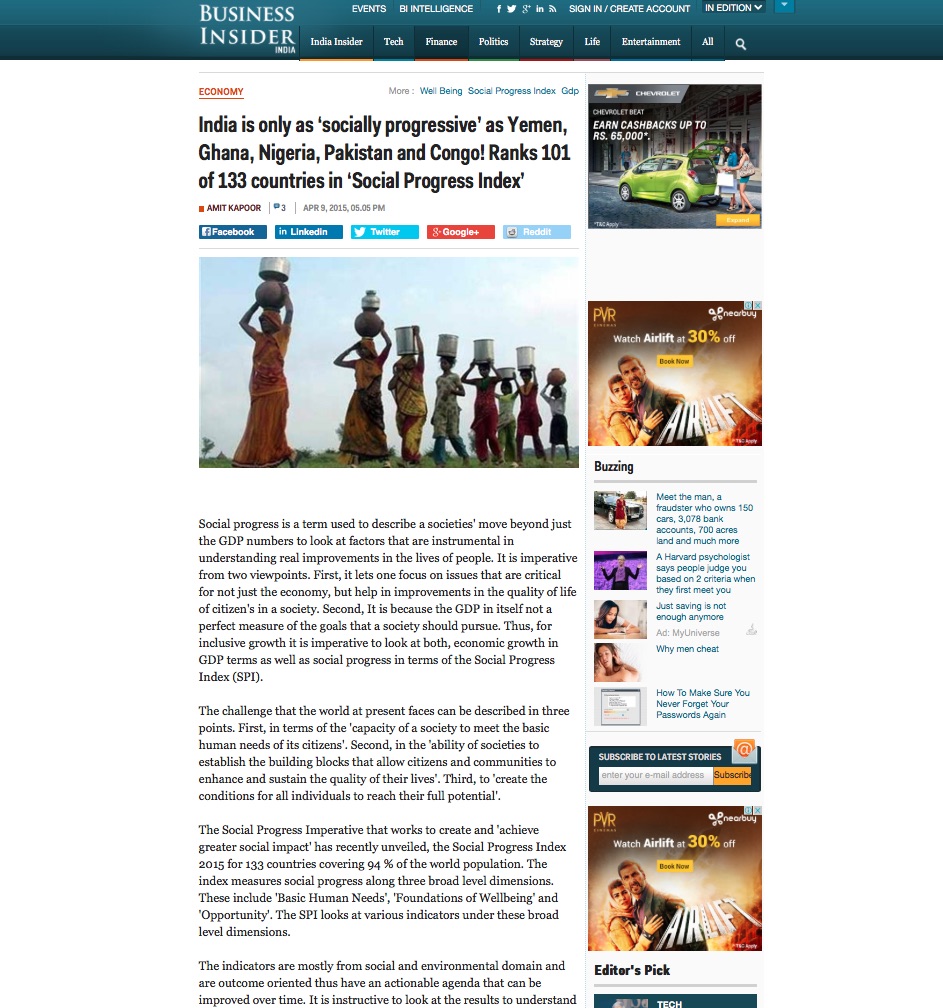 Social progress is a term used to describe a societies’ move beyond just the GDP numbers to look at factors that are instrumental in understanding real improvements in the lives of people. It is imperative from two viewpoints. First, it lets one focus on issues that are critical for not just the economy, but help in improvements in the quality of life of citizen’s in a society. Second, It is because the GDP in itself not a perfect measure of the goals that a society should pursue. Thus, for inclusive growth it is imperative to look at both, economic growth in GDP terms as well as social progress in terms of the Social Progress Index (SPI).

The challenge that the world at present faces can be described in three points. First, in terms of the ‘capacity of a society to meet the basic human needs of its citizens’. Second, in the ‘ability of societies to establish the building blocks that allow citizens and communities to enhance and sustain the quality of their lives’. Third, to ‘create the conditions for all individuals to reach their full potential’.

The Social Progress Imperative that works to create and ‘achieve greater social impact’ has recently unveiled, the Social Progress Index 2015 for 133 countries covering 94 % of the world population. The index measures social progress along three broad level dimensions. These include ‘Basic Human Needs’, ‘Foundations of Wellbeing’ and ‘Opportunity’. The SPI looks at various indicators under these broad level dimensions.

India falls in the ‘Low Social Progress’ category and ranks a dismal 101 on SPI. Three points merit attention with respect to the index and its findings. First, India’s composite score on the Index is 53.06 that is lesser than the average score of 61.00 for social progress across all countries. It means that 83 countries show above average performance while 50 countries show below average performance.

Second, there are distinct factors that India has to focus on for the improvement in performance. A look at India’s Social Progress Index Scorecard is instructive. On the three broad dimensions, India’s performance with respect to peers is best along the ‘Opportunity’ dimension (91st rank), average along the ‘Basic Human Needs’ dimension (101st rank) and poor along the ‘Foundations of Wellbeing Dimension’ (113th rank). In the ‘Opportunity Dimension’, India performs relatively well on well on the ‘Personal Rights’ (70th rank) and relatively poorly on ‘Tolerance and Inclusion’ (128th rank) sub-dimensions. Under ‘Tolerance and Inclusion’ sub-dimension worst performance is observed for ‘tolerance for immigrants’ (128th rank) and ‘community safety net’ (124th rank). Under the ‘Basic Human Needs’ dimension, India performs on an average along most dimensions; however striking underperformance is observed in ‘political terror’ (119th rank), ‘perceived criminality’ (94th rank) and ‘household pollution’ (110th rank). In the ‘Foundation of Wellbeing Dimension,’ the worst out of the three broad dimensions in India, gross level underperformance is observed along the ‘Health and Wellness’ sub-dimension (120th rank). Under this sub-dimension, ‘suicide rate’ (127th rank) and ‘premature death’s’ (120th rank) are a major cause of concern.

Third, there is a need to look at a sub-national level for understanding the performance of India. Institute for Competitiveness, India (http://e6a.ad5.myftpupload.com) is collaborating with Social Progress Imperative (http://www.socialprogressimperative.org) to do a sub-national ranking at states, districts and cities to understand the dynamics of social progress in the Indian context. The mapping exercise will help policymakers, businesses and media alike in understanding what is the reality of social progress at multiple levels of geography. This project envisages to work on improving the conditions of living for people and pushing forward the agenda of societal and economic progress.

It is important at this juncture to understand our underperformance on this index as it is a cause of concern and should not be plainly discarded as something of an emotional rant. It is because it focuses on the real imperative of development that is just not GDP but encompasses the dimensions of social progress so critical to shaping the goals that societies need to focus on. These in turn enable growth that is not just sustainable but socially inclusive.

Published with Business Insider on April 9, 2015.