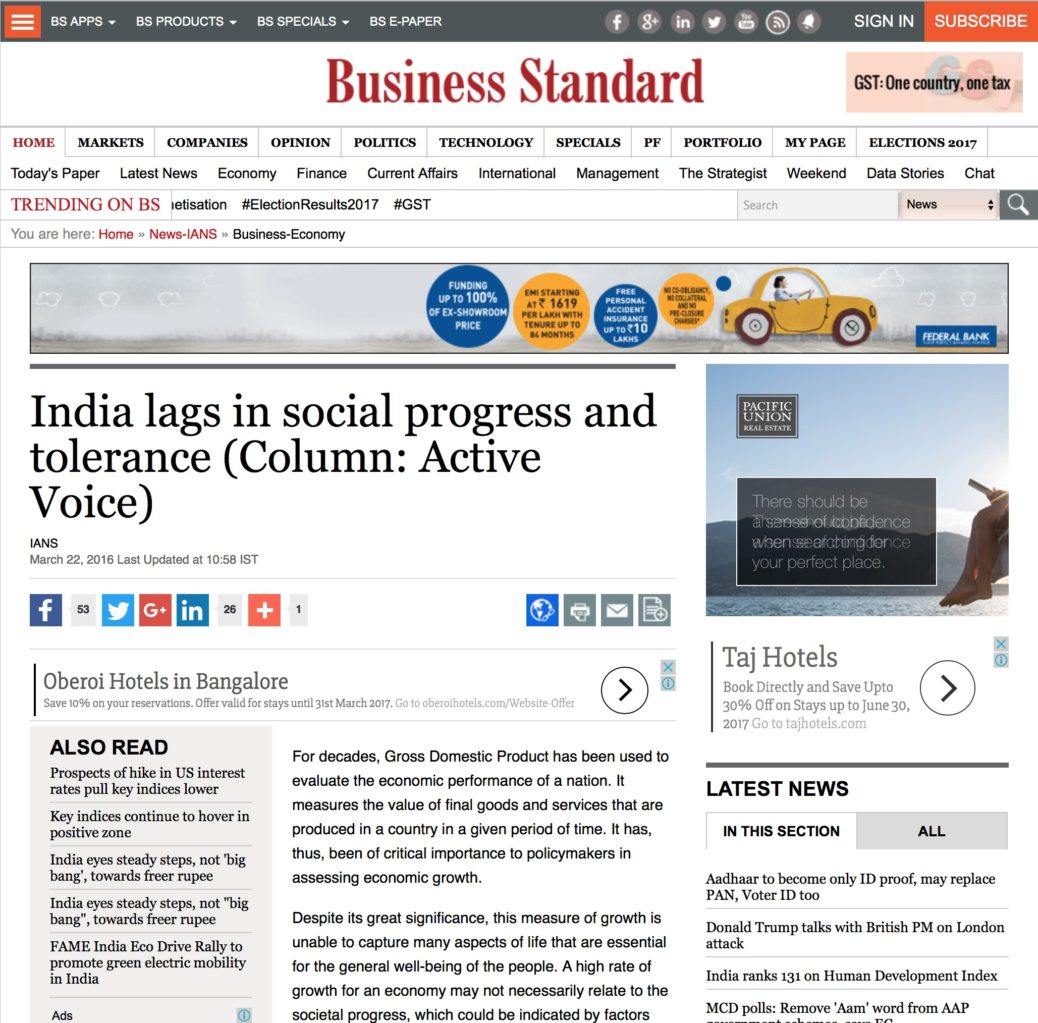 For decades, Gross Domestic Product has been used to evaluate the economic performance of a nation. It measures the value of final goods and services that are produced in a country in a given period of time. It has, thus, been of critical importance to policymakers in assessing economic growth.

Despite its great significance, this measure of growth is unable to capture many aspects of life that are essential for the general well-being of the people. A high rate of growth for an economy may not necessarily relate to the societal progress, which could be indicated by factors such as access to clean drinking water and sanitation, availability of affordable housing, access to basic or higher education, health and wellness, level of crime, property rights, environmental quality and the like.

To account for such dimensions of wellbeing, the Human Development Index (HDI) was developed about 25 years ago and since then has been published by the United Nations Development Programme (UNDP).

The index incorporates three key dimensions of human development – life expectancy, years of schooling and a decent standard of living measured by Gross National Income (GNI) per capita. One of the shortcomings of using this index as a measure of social progress is that it doesn’t include all the aspects of human well-being. Moreover, by incorporating income, it is unable to unveil any impact that societal progress may have on economic growth and vice versa.

Several other indices have been developed to measure well-being, for instance, Gross National Happiness, the Organization for Economic Cooperation and Development’s Your Better Life Index and the Legatum Prosperity Index. However, none of these indices captures social progress comprehensively and thus it is important to design a more holistic measure of well-being.

In 2013, a Social Progress Index (SPI) was launched by the Social Progress Imperative (SPI), a nonprofit organisation, based in Washington. Its methodology was developed by Professor Michael Porter of Harvard Business School along with a few other advisory board members of the SPI. Its conceptual framework is based on the seminal work of Amartya Sen on the role of capabilities and on the role of institutions in economic and social performance.

Social progress has been defined as the capacity of a society to meet the basic human needs of its citizens, establish the building blocks that allow citizens and communities to enhance and sustain the quality of their lives and create the conditions for all individuals to reach their full potential.

The 2015 Social Progress Index for the world which includes 133 countries with complete data and 28 countries with partial data scores 61 on a scale of 100. While the world performs best in terms of nutrition and basic medical care (87.47) and water and sanitation (68.57) in basic human needs, access to advanced education (46.24), personal rights (43.10) and tolerance and inclusion (42.36) remain the areas of concern.

Top three countries in terms of social progress are Norway (88.36), Sweden (88.06) and Switzerland (87.97). The US has been ranked 16 on social progress despite of its higher per capita GDP than most of the higher social progress countries. This is due to its weak performance in ecosystem sustainability and health and wellness.

Similarly, countries such as the UAE, Kuwait, and Saudi Arabia have been ranked low on social progress compared to their level of economic progress.

India has been ranked 101 with a low score of 53.06. It faces challenges in all the aspects of social progress except for nutrition and basic medical care and access to basic knowledge. One of the areas where India is severely lagging is tolerance and inclusion, which is driven by culture, norms and policies. Thus, for lower middle income countries like India, economic prosperity alongside institutional changes could bring about greater social progress and thereby, inclusive growth.

Published with Business Standard on March 22, 2016.