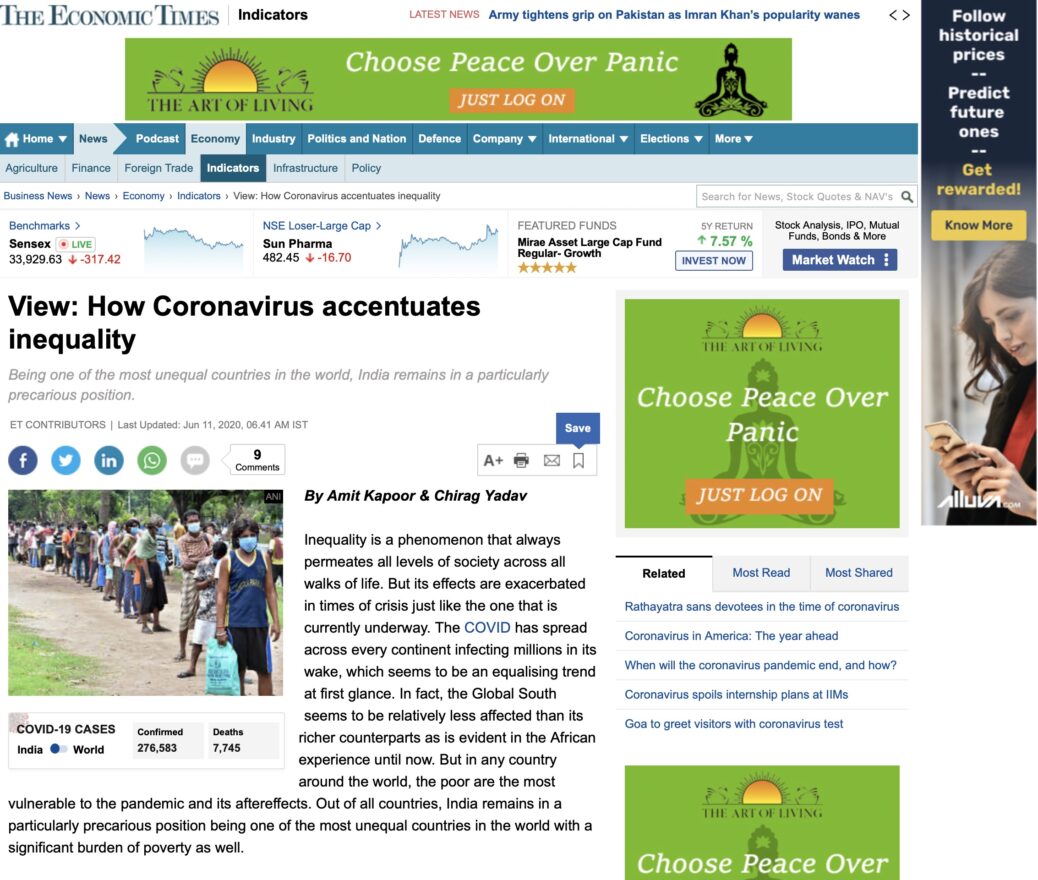 Inequality is a phenomenon that always permeates all levels of society across all walks of life. But its effects are exacerbated in times of crisis just like the one that is currently underway. The coronavirus has spread across every continent infecting millions in its wake, which seems to be an equalising trend at first glance. In fact, the Global South seems to be relatively less affected than its richer counterparts as is evident in the African experience until now. But in any country around the world, the poor are the most vulnerable to the pandemic and its aftereffects. Out of all countries, India remains in a particularly precarious position being one of the most unequal countries in the world with a significant burden of poverty as well.

It is the poorest sections of society which will find it most challenging to access healthcare, more so in India where out-of-pocket expenditure forms a bulk of medical expenses. Poor neighbourhoods are also more densely packed, which increases the likelihood of the spread of the virus. Their households are also typically constrained in terms of access of basic services like continuous water supply, which makes hygiene a luxury. But apart from such healthcare concerns of the pandemic itself, it is becoming evident that its unequal repercussions extend across every aspect of livelihood that is crucial for development and will set back our fight against poverty and inequality by decades.

The access to education, for instance, is becoming more challenging for children from poorer households. For a majority of Indians, digital learning is still not a viable option. Even though the mobile phone and internet penetration has been quite rapid and high over the last few years, the digital divide is still quite significant. As per the 75th round of National Sample Survey (NSS) from 2017-18, merely 24 percent of Indian households have an internet connection. There is a stark urban-rural divide in this spread. While a little over 15 percent of Indian households have access to internet, the corresponding figure for urban households is 42 percent.

Then there is the question of access to digital devices like smartphones and computers and also a reliable electricity connection to operate them. The same NSS report shows that only 24 percent Indians own a smartphone and 11 percent households own a computer. Moreover, merely 8 percent households with members aged between five and twenty-four years possess a computer along with an internet connection. Finally, a survey by the Ministry of Rural Development showed that less than half of Indian households received more than 12 hours of electricity in a day, which implies that even those households that have access to digital devices might face operational challenges. Thus, only a miniscule proportion of the Indian population can imagine providing education for their children through digital means at a time when traditional mechanisms have broken down.

As a result of the unequal nature of the impact of the coronavirus, its effects will reverberate across generations. The children from poor households that will lose out on vital access to education as long as the pandemic continues will hardly see an improvement in their conditions after that. These children will witness their households slide further into poverty over the coming year. The ILO estimates that more than 400 million people in India stare at such a future as they rely on informal work. In such a scenario, these children are more likely to be forced out of school and into the job market to sustain their households. So, the gaps between the haves and have nots in India will further widen and crystallise over the years to come.

These trends will also become visible between countries around the world. As per UNDP estimates, around 86 percent of children attending primary schools in low human development countries are currently not receiving an education. The same figure for countries that are high on the human development stands at 20 percent. The effective out-of-school rates are estimated to regress to levels seen in the 1980s. The world is, thus, faced with the prospect of losing indispensable developmental progress that it has achieved over the last few decades. The levels of poverty and inequality within and across countries are bound to exacerbate.

When faced with such a prospect, the only difference a country can make is by providing sufficient social protection and safety nets to prevent the regressive movement of people below the poverty line. Access to basic services can also be expanded through innovative means. Several states like Kerala and Bengal have moved their virtual classes to television sets, which has a wider penetration that internet even in rural areas. Even Doordarshan and All India Radio are broadcasting various teaching courses. This could be extended on a larger scale for central boards of education as well. The country needs to work towards reducing the vast inequality in education access to prevent accentuating its societal inequality in the future.

The article was published with Economic Times on June 11, 2020.