The Greek tragedy through the Ages 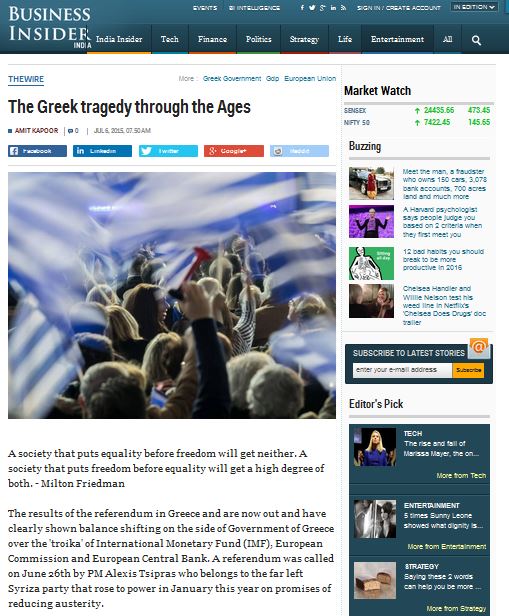 The results of the referendum in Greece and are now out and have clearly shown balance shifting on the side of Government of Greece over the ‘troika’ of International Monetary Fund (IMF), European Commission and European Central Bank. A referendum was called on June 26th by PM Alexis Tsipras who belongs to the far left Syriza party that rose to power in January this year on promises of reducing austerity.

The wordings of the referendum have been confusing to many people. It has asked people ‘Should the plan of agreement, which was submitted by the European Commission, the European Central Bank and the International Monetary Fund in the Eurogroup of 25.06.2015 and is comprised of two parts that constitute their unified proposal be accepted?’ The first of the two parts was titled as ‘Reforms For The Completion of the Current Program and Beyond’ and the second ‘Preliminary Debt Sustainability Analysis’. It is interesting to note that the question does not ask the future of Greece within the monetary union or the euro currency or any of those broader questions.

It is also interesting to see how Greece with a population of barely 11 million and a GDP of $238 billion has potentially disrupted the idea of European Union with a population of 503 million and a GDP of $18.5 trillion. The recent events especially of the failure of talks and the call for a referendum have raised fundamental questions about modern economic system and its relationship to democracy. Successive governments in Greece have had a tough time negotiating and later fulfilling the conditions of successive bailouts with the troika asking for significant reform in the past. The past 5 years have seen deficit reduction from about 15 percent to 5 percent but the costs for Greece and especially the people of Greece have been very high in spite of the ‘rescue packages’ offered by troika. It is because the ‘rescue packages’ totalling about 240 billion euros primarily went to the creditor banks in Germany and France and not to the people of Greece who have had to bear immense hardship. The turmoil has resulted in Greece’s economy shrinking by an unprecedented 25 percent from 2008 and its GDP per capita dropping by 24 percent from 21,500 in 2008 to 16,300 in the previous year. Unemployment levels in the economy are up to 25 percent now with the youth unemployment rates touching an unprecedented 50 percent. All this has caused panic and fear amongst people, and the economic revival seems distant. In one-way, an ‘OXI’ – No or ‘NAI’- yes on the referendum will really not make much of a difference immediately. Greece has formally also become the only developed country to default on its debt obligations to IMF.

It is thus instructive to look at how Greece got here and what should be expected in the future. A look at historical antecedents of Greece and the European project as a whole reveals that Greece has not had a very good record of public debt management.

Looking at ancient times an essay by Professor Charles J Bullock in 1930 mentions the case of Dionysius of Syracuse, who was a tyrant and used his power to debase the currency at will. A case is referred when Dionysius being pressed for money by his subjects orders his subjects to bring him all the drachmae and orders penalty by death to those who oppose the order. Upon receiving the Drachmae he restamps each Drachma and gives it the value of two drachmae thus repaying the loan and the money brought to be minted. Similarly, another case is cited where Dionysius coined tin and called an unwilling assembly to pass it on at the same rate as silver. It goes on to show probably the first instances of currency devaluation and debasement.

A significant part of previous millennium the Greeks were under the Ottoman Empire largely immune to the influence of the Europe and the industrial revolution. Their independence in 1829 meant that they could catch up with the rest of Europe, but that was not to be. According to research by professors Kenneth Rogoff and Carmen Reinhart Greeks have had the most dismal record of all the European countries for the much of 19th century with respect to their debt. They have defaulted thrice on their debt in the 19th century (post their independence from the Ottomans) and also skipped repayments 50 percent of the time. The twentieth century saw a number of coup d’etat with the Greeks fighting valiantly before the Nazi occupation. Post that a civil war ensued after which Greece saw some military governments that did not care about much about industrialization.

In 1957, came the idea of European integration and Greece was a little late to see merit in it. In 1981, Greece officially became the 10th country to be a member of the European Economic Community (EEC). The economy of Greece was uncompetitive at that time with inflation at about 25 percent averaging 18 percent from the two decades from 1973-93. The period also saw public debt to GDP rising fast. It rose from about 25 percent in 1981 to about 75 percent in 1992. Due to the deficit spending and rising debt what ensued was skyrocketing borrowing costs. The nominal interest rates in Greece were 24 percent in 1992 compared to 13 percent in Italy and 12 percent in Spain.

The Greek government along with several other EU nations signed the Maastricht treaty in 1992. The key point in the treaty was the creation of a single currency the Euro ( in three stages) and agreement among the signatories for convergence in economic policies for the same. The convergence criteria included several parameters. Chief among them was a reduction in debt to GDP ratios to 60 percent of the GDP, deficits close to 3 percent and inflation no higher that the lowest three inflation members of the euro zone. All this lead Greece to control and reduce its inflation, to little more than the euro zone in 2000. Similarly, deficits were reduced but Greece essentially admitted later that it had fiddled with deficit figures to get into the euro area. In January 2002, Greece brought in the euro to replace its volatile drachma. Greek borrowing costs plummeted as the euro was perceived to be a stable currency and investors saw the yield on Greek bonds almost converging to be at par with extremely creditworthy countries like Germany.

All this persisted till 2008 with rising GDP growth and a rise in deficits (which was partially hidden) when the global financial crisis struck. The low growth caught investors attention and yield on the Greek government bonds started to rise. They rose to astronomical levels in 2009 when the new government revealed that the deficit figures were not 6 percent as declared previously but a much higher 12.6%. All this resulted in a recession in Greece with GDP falling dramatically.

At present debt, sustainability is nowhere to be seen, and the debt to GDP ratio has risen to the level of 177 percent due to the fall in GDP over the years. A kind of slow bank run is also seen in recent months as PM Alexis Tsipras has not been able to strike a deal with Greece’s creditors. It has resulted in deposits plummeting in Greek banks to less that 150 billion euros. As the referendum was announced credit lines have dried and as a result Greece has put up capital controls. Capital markets and banks have been shut, and people can only withdraw 60 euros in a day.

To sum up focus on unsustainable pension system coupled with the euro system and manipulation of key economic and financial data has wreaked havoc on the economy. It is because within a monetary union a country does not have the power/ control to devalue its currency and make its exports competitive. In a political union like India or the US, the central government has authority to collect taxes and disburse it, according to the requirements of individual states. No such mechanism exists in the Eurozone. Added to these flaws was the Ill-conceived ‘rescue packages’ and austerity that have accentuated the crisis.

A question that immediately comes to mind is where does one go from here. Will one see Greece hold on to the European ideal or will it sing its own ‘Hymn to Liberty’? There has been speculation in the previous month of a Greek exit from the Euro -the ‘Grexit’, while others have called for more structural reforms. Either way the Greek economy remains uncompetitive and in a state of deep turmoil. Economically speaking structural reforms, with a focus on enhancing productivity and international competitiveness will have to be carried out either way if Greece is to get out of its present yet deeply embedded historical predicament.

Published with Business Insider on July 6, 2015.