Budget 2018 expectations: After Economic Survey, much now depends on what FM Arun Jaitley has in store 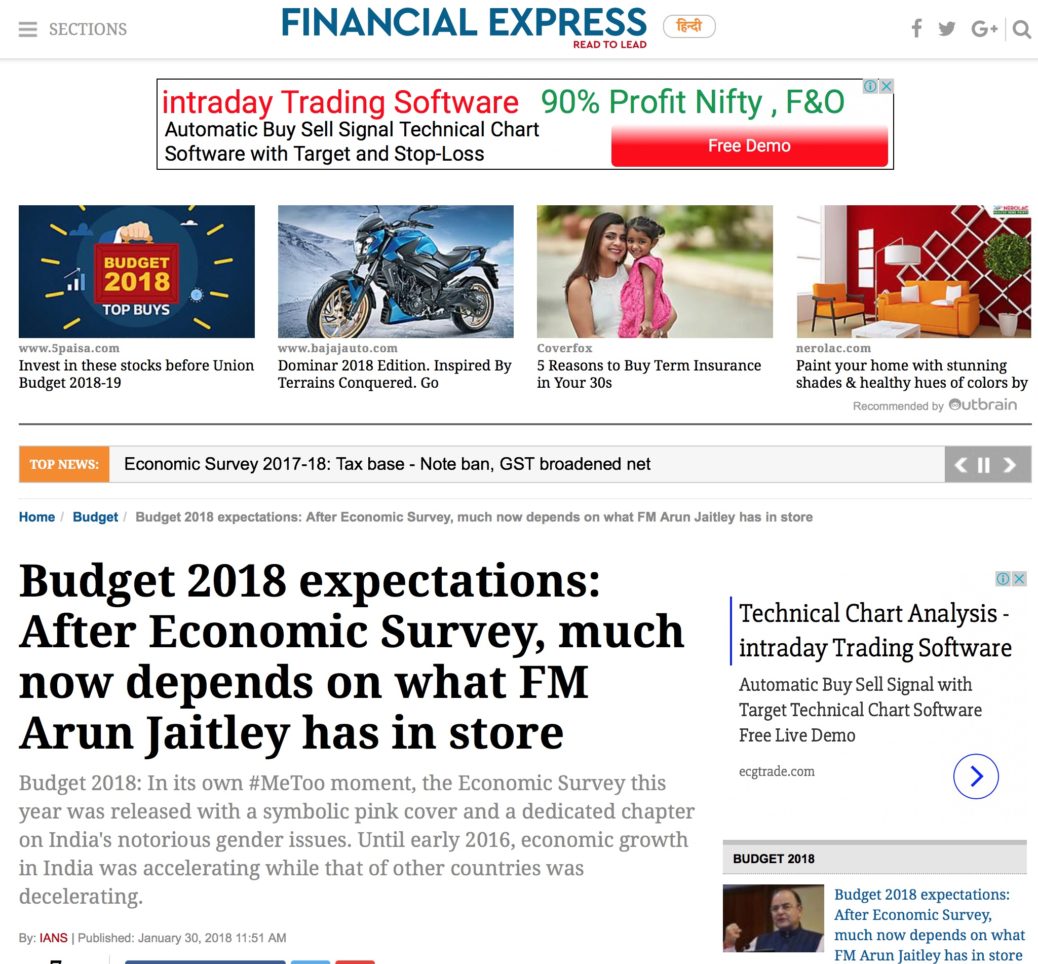 Budget 2018 expectations: After Economic Survey, much now depends on what FM Arun Jaitley has in store

In its own #MeToo moment, the Economic Survey this year was released with a symbolic pink cover and a dedicated chapter on India’s notorious gender issues. The Survey over the last few years under Arvind Subramanian has provided a refreshing take on resolving the challenges facing the Indian economy. In the past, he has given quite a few out-of-the-box policy recommendations like the establishment of a bad bank for resolution of the problem of bad loans and implementation of a universal basic income to do away with the inefficiency of subsidies. The document this year is no less insightful.

The Survey places the GDP growth estimate for the current fiscal at 6.75 percent. This figure is a tad bit higher than CSO’s projection at 6.5 percent as the CSO estimates have not incorporated the pickup in growth in the later half of the year by their own admission. Moreover, the Survey estimates that as a result of the reforms undertaken this year, real GDP growth will rise between 7 percent to 7.5 percent in the next fiscal. This would reinstate India’s position as the fastest-growing major economy in the world.

With regards to India’s economic growth in the recent past, the Survey highlights an interesting aspect. Over the last 4-6 quarters, India’s growth has temporarily decoupled with that of the world economy. Until early 2016, economic growth in India was accelerating while that of other countries was decelerating. Since then the opposite has been true. This was due to a combination of five factors. First, until mid-2016, real interest rates were following the downward global trend after which India’s rates deviated and started shifting upwards. This affected investment activity negatively and resulted in an appreciation of the rupee, which subdued export activity. The second and third factor was the twin effect of demonetisation and GST. The fourth was the twin balance sheet (TBS) challenge of banks and corporates while the final factor was the recent uptick in oil prices over the first three quarters of 2017-18.

However, off late India is displaying a robust revival in growth along with the world economy signalling an end of the temporary decoupling it witnessed. Meanwhile, the story of revival in the Survey is also punctuated with warnings of risk factors within the economy. The biggest challenge in the upcoming fiscal arises from the rise in oil prices. The Indian economy always finds its growth story challenged by twin deficits within its fiscal and current accounts owing to variability in the global oil prices. The economy needs to find a sustainable solution to this historical macroeconomic vulnerability by rapidly ramping up its strength on the export front, preferably in manufactured goods.

The second risk factor highlighted by the Survey, which could impact India’s growth in the near future is a possible correction in the stock markets. As this column has previously highlighted, Indian stock markets have displayed a puzzling trend over the last few years. Since December 2015, Sensex has risen 46 percent in rupee terms while economic growth and corporate profits have decelerated. This trend has largely been driven by expectations of a revival in growth and a sudden change in savings pattern of households after demonetisation. However, as the Survey points out, a sharp correction cannot be ruled out in case future growth of the economy and corporate earnings do not remain in line current expectations.

Such a correction in stock markets could trigger the classic emerging market “stall” in capital flows and force further hikes in interest rates, which will be quite inimical to economic growth. Therefore, the duality of growth and risk is the current saga of the Indian growth story.

So, what do the findings of the Economic Survey tell us about the focus of the upcoming Budget? First, as expected, the agriculture sector will be in deserving focus on February 1. The Survey stresses on giving adequate support to the sector. However, in a major setback to Modi’s aim of doubling agricultural income, the Survey provides a key finding that due to climate change annual agricultural incomes could reduce by 15-18 percent on an average. In unirrigated areas this figure could climb up as high as 20-25 percent. This provides some crucial Budget recommendations. Higher investment needs to be made towards expanding irrigation with the implementation of efficient drip and sprinkler technologies. Moreover, a plan to provide direct income support to farmers can be put in motion to replace inefficient agricultural subsidies.

Second, the Budget needs to address the perpetual problem of employment in the Indian economy. Although India’s unemployment rate is around 3.5 percent, the unemployment rate in the 15-24 age group stands at 10.5 percent, as per recent ILO estimates. Therefore, India has an abysmally low capacity to provide jobs to first-time workers. The only solution for India is to strengthen its manufacturing sector. Providing incentives to labour-intensive export sectors in the Budget can kill two birds with one stone. Apart from providing jobs, growth in the export sector will imply higher current account surplus for the Indian economy which can provide a cushion against swings in the global oil prices. Therefore, it would go a long way in reducing India’s historical macroeconomic vulnerability that the Survey highlights.

There are various other aspects of the economy that will hopefully be addressed when Mr. Jaitley stands up in Parliament on the fateful day. Reviving investment activity, stabilising the GST and, most importantly, the question of sticking to the fiscal deficit targets; quite a lot hangs in balance on the upcoming Budget. It will be interesting to see the course that the government decides to take.

The article was published with Financial Express, Mid Day, Business Standard, The Week and Economic Times on January 30, 2018.