A step forward in urban governance 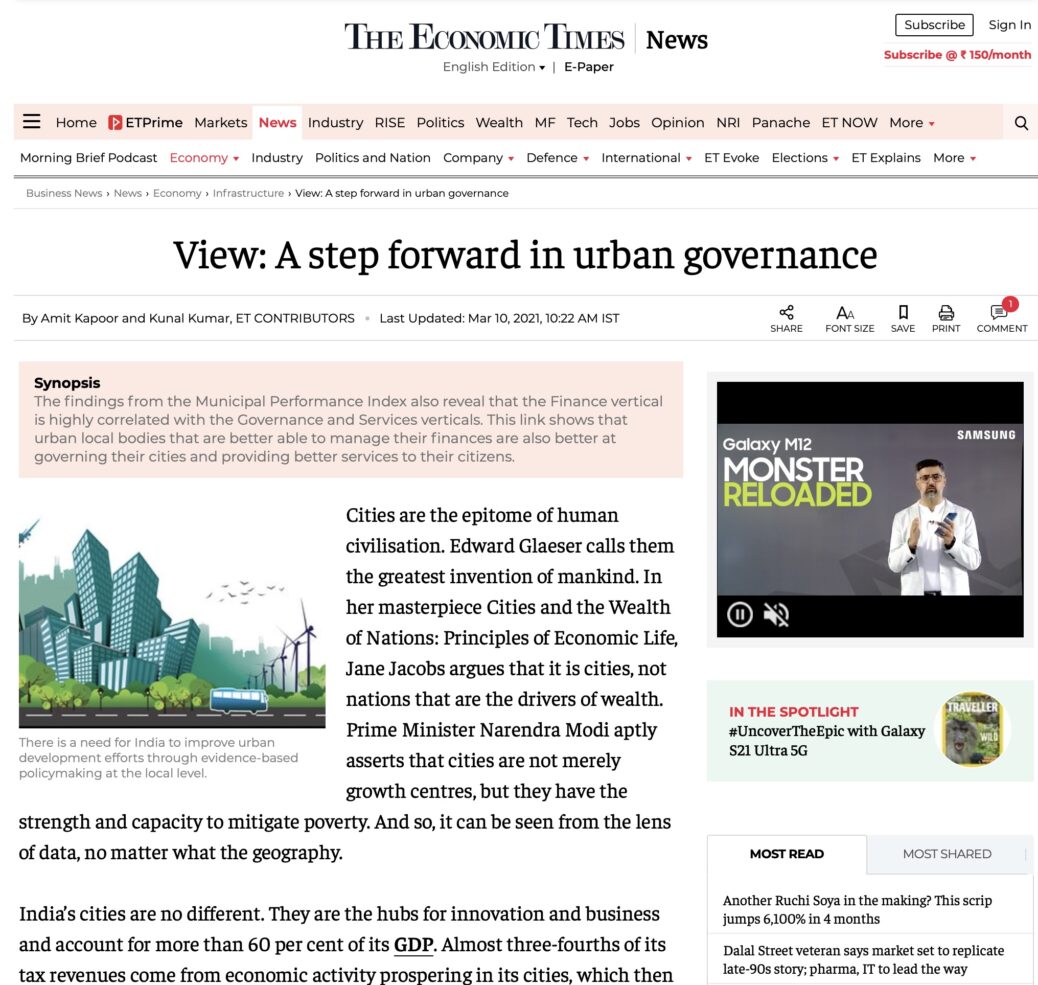 The findings from the Municipal Performance Index also reveal that the Finance vertical is highly correlated with the Governance and Services verticals. This link shows that urban local bodies that are better able to manage their finances are also better at governing their cities and providing better services to their citizens.

Cities are the epitome of human civilisation. Edward Glaeser calls them the greatest invention of mankind. In her masterpiece Cities and the Wealth of Nations: Principles of Economic Life, Jane Jacobs argues that it is cities, not nations that are the drivers of wealth. Prime Minister Narendra Modi aptly asserts that cities are not merely growth centres, but they have the strength and capacity to mitigate poverty. And so, it can be seen from the lens of data, no matter what the geography.

India’s cities are no different. They are the hubs for innovation and business and account for more than 60 per cent of its GDP. Almost three-fourths of its tax revenues come from economic activity prospering in its cities, which then feeds into the redistributive welfare programs of the government. They are the crucibles of job creation, melting pots of cultures and harbour the aspirations of the burgeoning middle class, thus driving a virtuous cycle of growth and better living.

Since India is one of the three countries in the world that are expected to witness maximum urban growth by 2050 as per estimates of the Population Division of the UN Department of Economic and Social Affairs, the country’s policy focus on cities is timely and promising. Given the expectation of rapid urbanisation, which is in line with current trends, Indian cities should be prepared to address the challenges that stem from it. Initially, people move to cities in search of a better life to fulfil their economic and social aspirations. But as the concentration of people rises in and around a city, multitude of complex challenges rise with it as they are met with a limitation of resources. City administrations, thus, play a crucial role in sustaining the liveability of cities driven by efficient management, planning, and provision of key services.

In an effort to assess the performance of key Indian cities on liveability parameters, the Ministry of Housing and Urban Affairs has released the Ease of Living Index 2020. The index captures the nature of urban living across Indian cities based on three pillars – quality of life, economic ability, and sustainability. The exercise was also accompanied with a Citizen Perception Survey to assess whether the data aligns with the expectation of the urban population from their cities. Over 32 lakh people contributed their feedback during this exercise.

The 111 participating cities have scored an average score of 53.51 out of 100. The best-performing pillar is Sustainability with an average of 53.63 followed by Quality of Life at 51.38. The Economic Ability pillar scores a low average of 13.17 indicating the enormous untapped potential for economic growth across Indian cities. The variation in scores among cities is also the highest in this pillar, which reflects regional economic inequality across urban India. The average of the Citizen Perception Survey scores exceeds all pillar averages and stands at 76.08, showing the resilience of India’s urban communities.

The rankings of all cities have been segregated into population categories of cities with population exceeding a million people (Million+) and those below a million (Less than Million) based on 2019 projections. Bengaluru and Shimla have emerged as a leader in their respective population categories with a score of 66.7 and 60.9, respectively. A significant learning that can be made from these scores is that there remains immense potential for Indian cities to improve the ease of living for their citizens.

Another noteworthy aspect of the index is the evident regional divide that exists across Indian cities. The cities from the Western and Southern region score much higher than cities from the rest of the country on an average. North-East and Eastern cities in the country lag the most. This evidence suggests that urban policy in India needs to keep such spatial divides in mind to ensure balanced regional development. Uneven improvement in quality of urban living across the country could lead to overburdening of population in some cities over the long run and limit the gains that can arise out of proximity of talent.

Finally, a surprising finding from the index is the disconnect between the city performance based on data provided by cities and the citizen perception of that city. While more metropolitan cities feature in the top of the rankings on the index, the highest scorers on the Citizen Perception Survey are majorly the lower-tier cities. Even though the relationship is not perfectly inverse, it can be argued that citizens in the low-performing cities have a lower benchmark for evaluation while the residents of better-performing cities have greater expectations from their cities.

The parameters covered under the Ease of Living Index 2020 are focussed on assessing outcomes as seen from a common citizen’s eyes. A large share of the inputs that contribute to enhancing ease of living in cities are contributed by the local administrative units, the municipalities. The Ministry of Housing and Urban Affairs has also released the first-ever Municipal Performance Index 2020, which assesses municipalities on their key functions. These have been classified into five verticals – services, finance, planning, technology, and governance. Indore and New Delhi Municipal Council have emerged as the leaders in their respective population categories with a score of 66.08 and 52.92, respectively.

The municipalities across India perform the best on the Services vertical with an average of 52.13 followed by the Finance vertical with an average of 51.11. Meanwhile, the lowest-scoring verticals are Technology, which has an average score of 24.02, followed by Planning, which has an average score of 34.03. Enhancement of abilities of municipalities to harness technology is at the forefront of India’s urban policy as espoused in the National Urban Digital Mission. It is expected that the performance on the Technology vertical will improve over time. Cities can draw significant learnings from leaders like Indore and Raipur on this front. Meanwhile, Planning is a vertical where the variation in scores across municipalities is the highest. Even the top scores in the two population categories – Vishakhapatnam and Kakinada – have a gap of 17.65 between their scores.

The findings from the Municipal Performance Index also reveal that the Finance vertical is highly correlated with the Governance and Services verticals. Specifically, the correlation coefficient between the scores of municipalities on the Finance vertical and Governance vertical is 0.52 while the correlation coefficient between Finance and Services vertical is 0.68. This link shows that urban local bodies that are better able to manage their finances are also better at governing their cities and providing better services to their citizens.

Unsurprisingly, the link between the Ease of Living Index and the Municipal Performance Index has been found to be exceptionally strong. To be precise, the correlation coefficient between the two indices stands at 0.56, which rises to 0.65 when the Citizen Perception Survey scores are dropped from the Ease of Living Index. Thus, suggesting that efficient functioning of municipalities is highly correlated with the ease of living of citizens in Indian cities.

The idea behind the release of these two indices is that such learning can improve urban development efforts through evidence-based policymaking at the local level. It can also encourage a healthy competition among cities and municipal bodies while helping them identify their unique challenges and means to overcome them through peer learning.

The article was published with Economic Times on March 10, 2021.