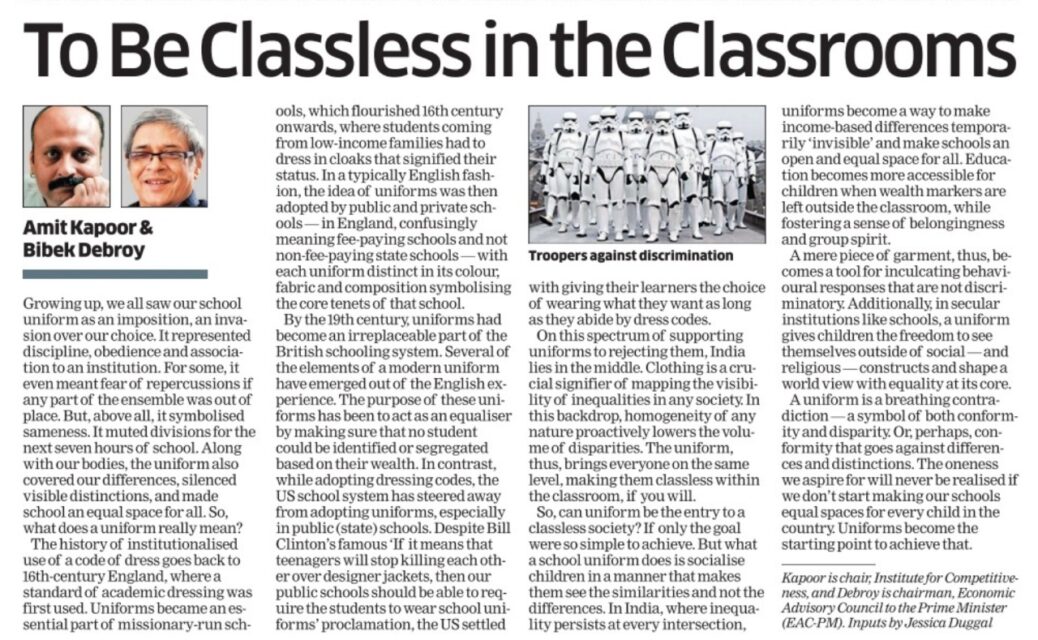 Growing up, we all saw our school uniform as an imposition, an invasion over our choice. A garment that reminded us of the hours of intellectual labour predecided even before birth, of the commitment we owed to maintaining it in all its pristine glory. It represented discipline, obedience and association to an institution. For some, it even meant fear of repercussions if any part of the ensemble was out of place. But, above all, it symbolised sameness. It muted divisions for the next seven hours of school. Along with our bodies, the uniform also covered our differences, silenced visible distinctions, and made school an equal space for all. So what does a uniform really mean?

If we are to trace back the history of institutionalised use of a code of dress, or uniforms as we know it, we are taken back to sixteenth-century England, where a standard of academic dressing was first used. Uniforms became an essential part of missionary-run schools, which flourished sixteenth-century onwards, where students coming from low-income families had to dress in cloaks that signified their status. In a typically English fashion, the idea of uniforms was then adopted by public and private schools- each uniform distinct in its colour, fabric and composition symbolising the core tenets of that school. By the nineteenth century, uniforms had become an irreplaceable part of the British schooling system. Several of the elements of a modern uniform has emerged out of the English experience. In fact, no country has emphasised and influenced uniforms as much as the old country. The purpose of these uniforms has been to act as an equaliser by making sure that no student could be identified or segregated based on their wealth. In contrast, while adopting dressing codes, the American schooling system has steered away from adopting uniforms, especially in public schools. Despite Clinton’s famous “if it means that teenagers will stop killing each other over designer jackets” proclamation in favour of better educational values, America settled with giving their learners the choice of wearing what they want as long as they abide by strict dressing codes. The glamourisation of this “liberal” idea has even become a part of the American Dream. On this spectrum of supporting uniforms to rejecting uniforms, India lies in the middle.

Clothing is a crucial signifier of mapping the visibility of inequalities in any society. Its tangible wealth- a symbol of an elite status quo. It is luxury. In this backdrop, homogeneity of any nature proactively lowers the volume of disparities. For the time being, it brings everyone on the same level – classless, if one can say. So can a piece of uniform be the entry to a classless society? If only the goal were so simple to achieve. But what a uniform starting from the most nascent level does is to socialise the children in a manner that makes them see the similarities and not differences. In India, where inequality persists at every intersection, uniforms become a way to invisiblise income-based differences and make schools an open and equal space for all. Education becomes more accessible for children when the plague of wealth and possessions is left outside the classroom. It fosters a sense of belongingness and group spirit. A mere piece of garment thus becomes a tool for inculcating behavioural responses that are not discriminatory. Additionally, in secular institutions like schools, a uniform gives children the freedom to see themselves outside of social and religious constructs and shape a world view with equality at its core. At the simplest level, it integrates them. We treat them as functioning members of society who choose to commit to a dress code and honour it as part of their identity.

A uniform is a breathing contradiction. It is both rebellion and conformity. Or perhaps, conformity through a rebellion against differences and distinctions. What it stands for is beyond patriotic fervour towards one’s school. It becomes a portal to a re-imagined world where we teach our children to stand for an inclusive community, refuse differences and discriminations, not associate wealth or religion to the core of one’s identity and have the courage to carry out these attitudinal learning in the world at large. The oneness that we aspire for will never be realised if we don’t start making our schools equal spaces for every child in the country. Uniforms become the starting point to achieve that. It is not a one-stop solution, but through uniforms, schools aim at instilling profound values of unity and solidarity from a very young age.

The article was published with Economic Times on February 22, 2022.